You are here: Home / Featured Articles / Your Fast Food is Loaded With Plasticizers 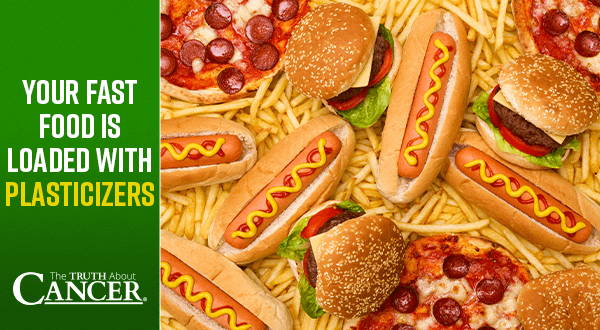 Fast food is notoriously bad for you. Sure, it’s convenient. And those fake, processed foods are literally designed to be addictive. But the nutritional value of most of these meals is nonexistent, and the trans fats alone are worth avoiding these places altogether.

A new study released on October 27th has discovered that most fast food contains high levels of plasticizers called phthalates. The research, published in the Journal of Exposure Science & Environmental Epidemiology, showed that the drive-thru food you love to hate (and hate to love) is chock-full of hormone-disrupting chemicals and solvents used to increase plasticity.

Researchers at George Washington University ordered dozens of items from McDonald’s, Burger King, Pizza Hut, Domino’s, Taco Bell, and Chipotle. According to their analysis, they found phthalates in over 80% of the samples. And 70% contained the phthalate DEHP. Both of the chemicals have been linked to reproductive health problems.

The study authors found several different phthalates, as well as other chemicals meant to replace phthalates, across a variety of fast food takeout items, including fries, burritos, and cheeseburgers.

Phthalates are a widely used type of plasticizer, used to give plastic and other substances flexibility. They’re also a type of endocrine-disrupting chemical (EDC), which mimic or otherwise interfere with the hormones we naturally produce, like testosterone and estrogen.

Studies of animals and humans have indicated that greater exposure to EDCs, including phthalates, can have a negative effect on the development of children and raise their risk of health conditions like asthma, obesity, and later fertility problems

“We found phthalates and other plasticizers are widespread in prepared foods available at U.S. fast food chains, a finding that means many consumers are getting a side of potentially unhealthy chemicals along with their meal,” said lead author Lariah Edwards, a postdoctoral scientist at George Washington, in a statement provided to Gizmodo.

Some research has suggested that DEHT may be a safer chemical than other phthalates, but the study notes that “DEHP is a well-known male reproductive toxicant and induces cryptorchidism and changes in testicular testosterone and Leydig cell homeostasis.”

It’s likely that the plastic packaging used to store these foods is one avenue for contamination. But the gloves used to prepare the foods for customers may be another. The team’s other tests found levels of replacement plasticizers in the gloves specifically.

Co-author Ami Zota, a professor of environmental health at GWU, said the study raises concerns that low-income Americans and people of color are being disproportionately exposed to phthalates.

“Disadvantaged neighborhoods often have plenty of fast-food outlets but limited access to healthier foods like fruits and vegetables,” Zota told The Washington Post. “Additional research needs to be done to find out whether people living in such food deserts are at higher risk of exposure to these harmful chemicals.“

The detected levels of phthalates in the study are below the Environmental Protection Agency’s health protective thresholds. But Edwards argued that “Diet is still a very important, predominant way that we are exposed to these chemicals.”

“So regardless of the concentrations and because we know that these chemicals are linked to some of these worrisome health outcomes, it’s important that we look at these concentrations in food and really understand,” she said.

It’s time to ditch the fast food, ya’ll. For anyone in need of some easy, healthy, disease-fighting recipes, check out Charlene’s collection of tasty meals here.