You are here: Home / Cancer Causes / Is Your Home Too Clean? How Germs Prevent Childhood Cancer 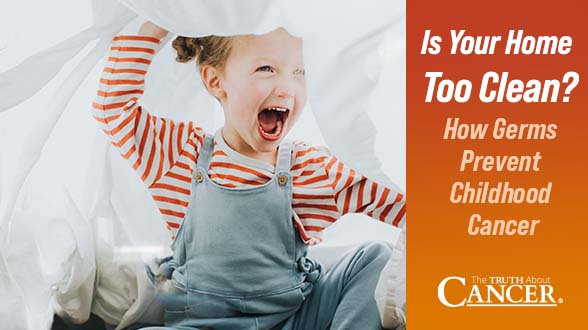 Acute lymphoblastic leukemia, or ALL, is the most common childhood cancer. But according to research from across the pond, a major contributing factor could be that our babies are too clean. Mel Greaves, a research professor at the Institute of Cancer in London and the study’s author, says that the cancer has a biological cause and may be preventable.

Acute lymphoblastic leukemia is most common in children 4 years and younger, and global rates are increasing. It affects the bloodstream and can quickly spread to other places like the liver and nervous system. When children are diagnosed with ALL, doctors almost always recommend chemotherapy. But this may be completely unnecessary.

While there are some children genetically predisposed to ALL, the study found that only 1% of them go on to develop the disease, implicating an environmental factor. The researchers also discovered that the disease was more prominent in affluent societies, which suggests that this is an issue of “nature vs nurture”.

The Role of the Immune System in Childhood Cancer

The trigger for ALL has to do with childhood infections. For most children, the immune system is able to handle the attack on the body and continue normally. But for those with weakened immune systems, the infection can trigger more problems – including leukemia.

According to Greaves, the first year is the most important. Children who grew up in cleaner environments and had less interaction were more likely to experience weakened immune systems, and therefore more susceptible to developing ALL.

The research strongly suggests that [acute lymphoblastic leukemia] has a clear biological cause and is triggered by a variety of infections in predisposed children whose immune systems have not been properly primed,” said Greaves.

For an immune system to work properly, it needs to be confronted by an infection in the first year of life. Without that confrontation with an infection, the system is left unprimed and will not work properly.”

And he’s right; our bodies are designed to build immunity through exposure to various microorganisms. Those of you who have been following TTAC know that nearly 80% of the immune system is found in our gut, and we need healthy bacteria to support immunity. Unfortunately, “modern” medicine seems to have forgotten the power of natural immunity, and our children are paying for it.

When it comes to weakened immune systems, there are many culprits. A massive toxic load from agricultural chemicals, radiation, and pollution create chronic inflammation and leave our immune systems under constant assault. The massive number of infant vaccines we administer put the immune system in a protective mode instead of allowing it to introduce the bacteria required for healthy gut flora.

And a fear of germs has left many young children isolated in a Lysol prison, safe from germs, dirt, other children, or anything else their parents are worried about. Professor Greaves can see the irony; as we make advances in hygiene and medicine, we reduce critical exposure to bacteria that can cause bigger problems. From the study:

Childhood ALL can be viewed as a paradoxical consequence of progress in modern societies, where behavioural changes have restrained early microbial exposure. This engenders an evolutionary mismatch between historical adaptations of the immune system and contemporary lifestyles. Childhood ALL may be a preventable cancer.”

There have been many theories on what causes ALL, and the scientific community has been divided. Some have said that it is a prenatal genetic mutation that can’t be avoided. Others claim that ionizing radiation is to blame. Power lines, chemicals, and other reasons have been cited. But the research shows clearly that a weakened immune system is to blame.

And Professor Greaves, who was recently knighted for his work, seems to be on the right side of things. He has acknowledged that babies who do not have a chance to prime their immune systems are at risk. “When such a baby is eventually exposed to common infections, his or her unprimed immune system reacts in a grossly abnormal way,” he said. “It over-reacts and triggers chronic inflammation.”

Chronic inflammation is at the root of nearly all major disease and is the result of a damaged immune system. In today’s age, children are so protected from bacteria that chronic inflammation later in life is almost inevitable. In addition to cancer, this can cause a host of other maladies. And nearly all of them are preventable if we help promote a healthy gut and a strong immune system.

The research team, led by Sir Mel, is now searching for ways to prevent the childhood cancer. And they’re starting with the gut. By looking at the bacteria, viruses, and other organisms found in the gut microbiome, the team hopes to find ways to help prime the immune system.

Rather than create a pill that synthesizes these organisms, the researchers are looking to nature for the answers. The hope is to develop a yogurt that’s specially formulated to include microbes that children aren’t getting.

The aim is to find 6 or maybe 10 species of microbes that are best able to restore a child’s microbiome to a healthy level. This cocktail of microbes would be given, not as a pill, but perhaps as yogurt-like drink to very young children,” Greaves said. “And it would not just help prevent them getting childhood leukemia. Cases of conditions such as type 1 diabetes and allergies are also rising in the west and have also been linked to our failure to expose babies to bacteria to prime children’s immune systems. So, such a drink would help cut the numbers of cases of these conditions as well.”

When it comes to our health, there is no better defense than a strong immune system. And that starts in the gut. By turning to nature for the right nutrients, the right bacteria, and the right lifestyle, we can prevent many of these diseases. So, go ahead – let the kids play outside. It could just save their life.

←
Previous
Stress: The Silent Killer
→
Next
Chemotherapy Detox: How to Rebuild Your Health after Chemo