You are here: Home / Cancer Causes / 5 Diseases You Can Avoid by Maintaining a Healthy Gut

There is a growing amount of research-based evidence that shows how crucial having a “healthy gut” (meaning a good balance of gut flora) is for your overall health and wellness − including your mental and emotional health.

Your gut contains a delicate system of over 100 trillion organisms – fungi, bacteria, yeasts, and other microbes – collectively known as your “microbiota.” Each of these organisms has a purpose within the symbiotic community that is your microbiome.

More to the point, NOT having a well functioning microbiome with the microbiota working in harmony can have some distinct health consequences.

Depleting the diversity of your microbiota, or allowing specific strains to gain the upper hand, is an imbalance. This is also known as dysbiosis. Everyday things like sucralose, antibiotics, and your diet can adversely affect your gut flora balance. When this system is permitted to get out of balance, the synergy dissipates, and true chaos can occur… wreaking havoc on your body and mind.

Here are just five specific areas of health and wellness that have been linked to gut health, or lack thereof:

Probably the most obvious consequence of an imbalanced microbiome is what it can do to compromise your nutrition.

The microbiota in your system carry out countless processes that assist in digestion and the absorption of nutrients. As an article by Tufts University put it, “Your microbiota also work as vitamin-production plants. Bacteria in the gut synthesize vitamins, and those that they don’t use are excreted to benefit their host.”1

The body’s inability to properly absorb nutrients is known as malabsorption syndrome.

Mess with the balance of microbes, and it follows, the body will not get the full range of nutrients.2,3,4 You can be eating the healthiest foods on the planet, but if you can’t absorb them, there’s little benefit.

In addition, there are chemicals and vitamins created within your gut, as a result of the many interactions between the different microbiota. Likewise, there are several amino acids and hormone processes created by and connected to what happens in your microbiome.5,6,7 If your microbe family is in disharmony, these interactions may be altered, or not present at all, leading to deficiencies that affect your health, mood and wellness.1,8,9

There is a growing amount of research connecting weight imbalance (gain, obesity) to your gut health.10,11,12

As stated in a Scientific American article, the “wrong mix” of microbes can “set the stage for obesity and diabetes from the moment of birth.” This is because the microbiome affects how your body stores fat, balances glucose, and responds to hunger-stimulating hormones, among other things.13

Experiments on mice suggest that we pass microbes back and forth between those close to us in our environment. The research seems to show that living with healthy people with healthy microbiomes, can have benefits for those predisposed to weight problems, as long as they are living a healthy, probiotic-promoting lifestyle, as well.14

However, it has also been noted that diet can significantly alter the microbiome in just a single day! The mice experiments observed that if the typical high-fat, high-carb Western diet was eaten, the healthy microbes didn’t “move in” to the obese mice, as they had previously observed. Diet still remains the biggest contributor to weight issues, even as it relates to a healthy microbiome, and how your body processes fat, nutrients, hormones, etc.14

Bottom line (pun intended), seeking gut balance is a vital step to anyone with weight concerns.

The term “autoimmune disease” comprises over 80 health issues.15 What generally defines an autoimmune problem is the body starts attacking itself – tissues, organs, cells, etc. – normally referred to as an “inappropriate response.”

This creates damage and inflammation that creates further problems and can be a vicious cycle.

Ironically it can often be inflammation that contributes to the development of autoimmune and allergic disorders, not the least of which can be caused by a microbiome imbalance.16-19

You may be thinking: What? My gut affects my brain!? It sure does. To an even greater extent than known before, according to scholars and scientists investigating the “gut-brain axis.”22,23

Here are a few facts to help you understand how your brain is directly influenced by your microbiome:

Also of note, there is emerging evidence that the microbiome is observed to have specific characteristics within Alzheimer’s patients, as well as children with autism. However, more research is required in both these areas.25,26,27

One area that has had much more defined conclusions is the effect of the GBA on mood.28,29

As mentioned in the bullets above, serotonin30 and dopamine are just two brain chemicals that are produced in the gut.31-33 The interplay of chemicals and hormones between the brain, gut, and body can be affected by microbiome imbalance, to the point of creating “high levels of major depression and anxiety.”24

A 2014 study noted that depressed patients held certain strains of bacteria in common.33 In Sweden, researchers noted that mice bred microbe-free were naturally more daring, and had less anxiety, over mice that developed normal microbiota, or had various forms of it implanted.34

A healthy microbiome is so important to brain balance and psychological disorders, that work is being investigated in “psychobiotics” – the use of probiotics to repair the microbiome, and thus reverse disorders.24,33,35

I certainly can’t leave out the connection between your microbiome balance and cancer. Research abounds linking the development of cancer to a compromised microbiome. Essentially, the systemic failures that results when the microbiota is out of harmony can lead to tumors and cancer.36

A 2015 paper, Cancer and the gut microbiota: An unexpected link, revealed that epidemiological studies indicate damage to the microbiome as a major risk factor in cancer development. Once again, a GI system that is imbalanced leads to inflammation locally and systemically, which can so severely affect the body as to allow several different types of cancer to flourish.37

The improper balance of microbes in the body have been linked to colorectal cancer, breast and liver, among others.38

One thing seems true: anyone wanting optimal health, or to reverse already existing problems, should look at their gut balance as a matter of profound importance.

A quality probiotic diet, supplemented with substances of and contributing to microbiota diverse richness is essential to your health and wellness. 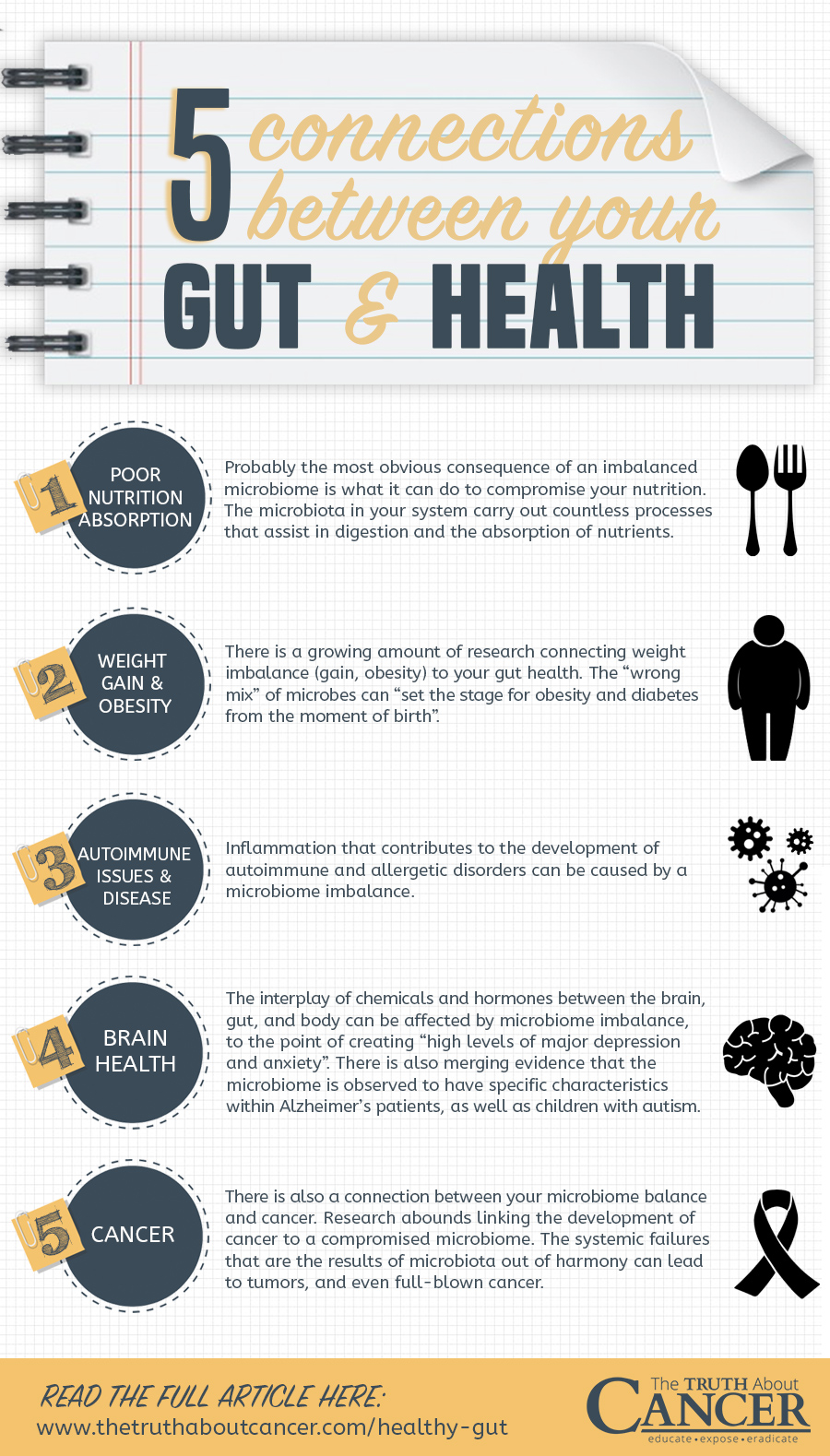 What is a Probiotic Diet?

A probiotic diet would be one that includes quality probiotic foods and microbe promoters, such as fermented foods, those rich in antioxidants and phenols, and lactic acid; prebiotic foods (these feed the probiotics). Be sure to avoid microbiome disrupters such as sucralose, antibiotics, alcohol, and preservatives.

We also recommend supplementing with a really good probiotic, preferably one with strong strains of probiotics known to survive the digestive system, to colonize well, and contain other microbiota enhancing substances.