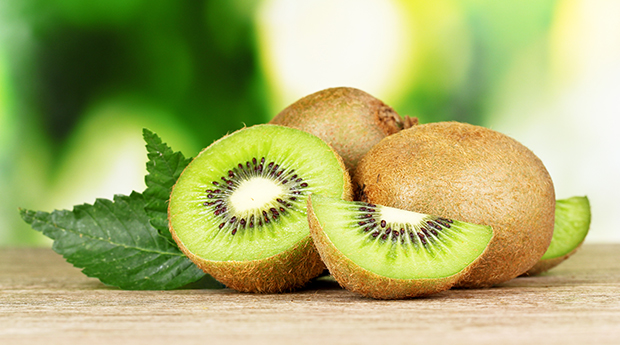 It surprised me to learn recently that one of my favorite fruits − the kiwi − isn’t actually native to New Zealand like most people think and its name suggests. Known scientifically as Actinidia deliciosa or Actinidia chinensis, depending on the variety, the true origins of the kiwifruit can be traced back to ancient China, believe it or not. There it was long referred to as “Yang Tao” − which translated into English means “Chinese gooseberry.”

The little-known history of how the kiwifruit (before it was even called the kiwi) made its way around the world is a fascinating one. This fuzzy little fruit first left the borders of China a little over a century ago in 1904. A missionary educator by the name of Isabel Fraser took a particular liking to kiwi while on sabbatical in China, prompting her to smuggle the seeds of the fruit back home with her to New Zealand. After a little name-tweaking by a local food distributor that took notice of its newfound novelty and popularity, the kiwi would quickly become New Zealand’s national fruit. From there it eventually made its way abroad to the U.S., Europe, and elsewhere.

Today, the kiwi is one of the most beloved fruits in the world, cherished by millions for embodying what some might describe as the perfect balance of tartness, sweetness, and crunch. Its little black seeds adding a delectable and unique texture that’s hard to find in any other fruit. But the relevance of the kiwi goes far beyond just its bold flavor profile and satiability: the kiwifruit is also a powerful medicinal food with a lot to offer in the realm of healing nutrition.

The immense health benefits of kiwifruit are perhaps the most overlooked aspect of this incredible little fruit. If they even know about it, many people take for granted the fact that the kiwi contains almost three times the recommended dietary allowance of vitamin C (roughly five times that of an orange), as well as high amounts of vitamin K, a fat-soluble vitamin that’s known to help blood clotting, build strong bones, and prevent heart disease, as well as guard against metabolic syndrome.

The kiwifruit’s vitamin K content alone makes it an incredible functional food, helping to reduce the risk of cardiovascular disease while decreasing the likelihood of early death from all causes. That’s right, vitamin K is a true-to-life panacea in many ways, helping to protect against many of the most common chronic health conditions that lead to early death. Conditions such as atherosclerosis, osteoporosis, heart disease, diabetes, and cancer.

Kiwifruit is also rich in vitamin A, vitamin E, potassium, copper (the good kind that your body needs to complement zinc), and vitamin B6 and B12 (folate). Very few foods contain naturally high amounts of vitamin B6, which is unfortunate because this immune-supportive nutrient likewise helps protect against heart disease, chronic inflammation, cancer, and many other serious health conditions.

This one might come as a surprise, but kiwifruit is also densely packed with omega-3 fatty acids − yes, just like the kind found in fatty fish and saturated fats. Omega-3s have received quite a bit of attention in recent years for their supportive effects on both brain and heart health, and research shows that they also help “lubricate” the body, effectively removing triglycerides from the bloodstream while “greasing the wheels” of joints, tendons, and overall mobility.

Specifically with regards to cancer, the various phytonutrient, flavonoid, and antioxidant compounds present in the kiwi, both in its flesh and skin (yes, you can eat the skin of organic kiwifruit, and you should because it’s high in nutrients!) help to combat free radical damage, which left unchecked over time can lead to chronic disease. Oxidative stress in general provokes an inflammatory response throughout the body, potentially manifesting later on as anything from gut dysbiosis to malignant tumors. Hence the importance of consuming these kiwifruit compounds as part of a healthy diet. 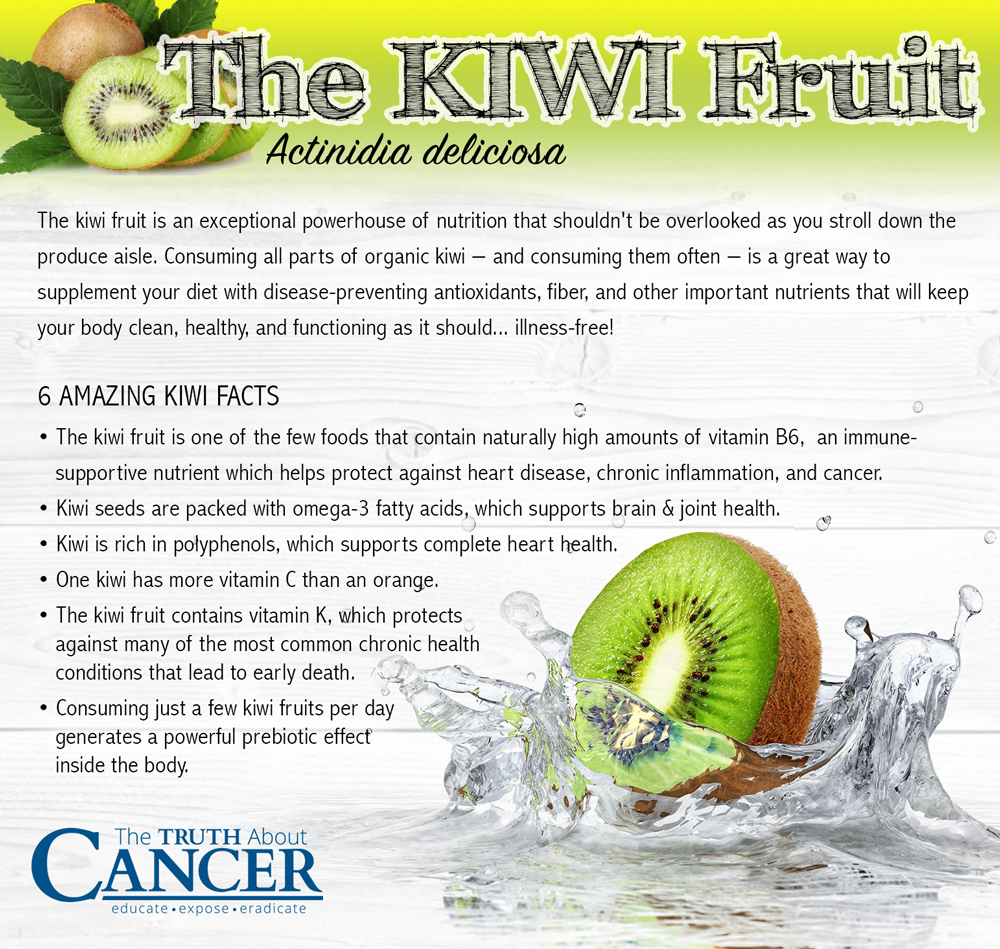 The Kiwifruit: A Fibrous Food Rich in Gut-Balancing Prebiotics

It’s a fact that healthy digestion isn’t possible without an actively-diverse gut microbiome, and the kiwi is likewise helpful in this regard. Kiwi is a fibrous fruit rich in pectic polysaccharides and soluble fiber. The flesh of the kiwi, in particular, provides full-spectrum nourishment not only for you, but also for the billions upon billions of probiotic flora that populate your digestive tract in order to support your immune system and help you digest your food.

Research shows that consuming just a few kiwifruit per day generates a powerful prebiotic effect inside the body. Prebiotics are the soluble fiber material that’s designed specifically to nourish the probiotics (healthy bacteria) that live inside our guts. Beneficial microflora strains like Lactobacilli and Bifidobacteria greatly benefit from regular kiwi consumption, one human trial found, acting to balance out these “good” bacteria while promoting healthy bowel movements and aiding the body in better assimilating nutrients from food.

This study concluded that consuming kiwis acts quickly to exert these effects, “fertilizing” Bifidobacterium and Lactobacillus so that they grow stronger and more populous. These prebiotics found in kiwifruit help improve the overall functionality of the digestive system, while at the same time bolstering the immune system, a bulk of which resides in the gastrointestinal tract.

Since they’re ground-zero for where life starts, plant seeds are typically a treasure trove of vitamins, minerals, and other nutrients− and kiwifruit seeds are no exception. If you’re at all familiar with what the inside of a kiwifruit looks like, you already know that this fruit is literally jam-packed with tiny, black seeds that contain the highest levels of vitamin E, a powerful antioxidant, found anywhere else in the body of the fruit.

Vitamin E is responsible for performing a number of important functions throughout the body. These include regulating and balancing hormones, normalizing cholesterol levels, improving the moisture and elasticity of skin, strengthening hair, improving eyesight, protecting against memory loss and cognitive decline, and enhancing muscle strength and physical endurance levels. Vitamin E is so powerful of an antioxidant that it’s often used as a healing aid alongside conventional medical treatments to minimize their harmful side effects.

All in all, the kiwifruit is an exceptional powerhouse of nutrition that shouldn’t be overlooked as you stroll down the produce aisle. Consuming all parts of organic kiwi − and consuming them often − is a great way to supplement your diet with disease-preventing antioxidants, fiber, and other important nutrients that will keep your body clean, healthy, and functioning as it should… illness-free!

←
Previous
How to Stop Colorectal Cancer From Happening to You
→
Next
Holiday Recipe: Cancer-Fighting Almond Goji Brazil Nut Cookies