You are here: Home / Uncategorized / Does the Government Care About Environmental Toxins? 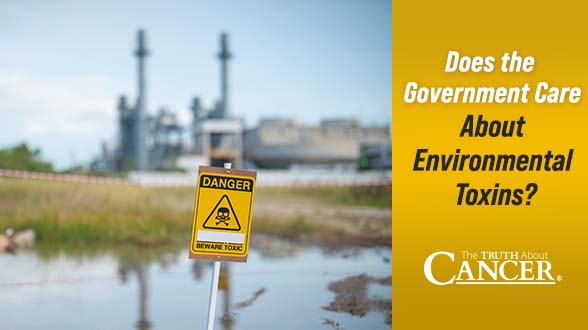 For the past several years, the government has been forcing medical interventions on us while limiting our treatment choices and censoring information on alternatives to “Western” medicine. More recently, they’ve crippled our economy, closed down schools and churches, and made anyone who questions the official narrative seem like a “second-class citizen.”

Even worse, they’ve persecuted and silenced licenses, practicing doctors and scientists who have raised questions about their rules and methods. Around the world, governments have justified these actions by claiming that they are for “the greater good” – that the government is simply looking out for our best interests.

But is that really true?

It is well established that toxins – in our air, water, food, clothes, medicine, and more – are a major cause of disease. This includes cancer and heart disease, which are among the top killers worldwide. If the government really cares about our health, they should be staunchly protecting us from these toxins, right?

Don’t be so sure. Let’s take a look at what the government is doing for the greater good when it comes to toxins.

A toxin is anything “foreign” to your body that your basic, built-in systems are unable to process. This includes industrial chemicals, environmental pollution, pharmaceutical and over-the-counter drugs, additives to food and water, and so much more.

Heavy metals, parasites, bacteria, tobacco, EMFs (electromagnetic fields), and pesticides are some forms of toxins that invade your body and destroy your health. There are many such substances that you unknowingly eat, drink, inhale, or apply to your skin.

Government and health agencies provide consumers with a false sense of security and they are given trust that they absolutely have not earned. The government, the medical community, and manufacturers are not going to help you. That is not a “conspiracy theory” – It’s a fact.

In reality, these agencies have proven time and time again that they perpetuate the use of toxins.

When you think about government agencies – let’s use the United States – your mind will quickly populate with well-known names such as the Environmental Protection Agency (EPA), the United States Centers for Disease Control and Prevention (CDC), the United States Department of Agriculture (USDA), and the Federal Food and Drug Administration (FDA).

According to the environmental action group, National Resources Defense Council, “More than 80,000 chemicals available in the United States have never been fully tested for their toxic effects on our health and environment.”

The council goes on to explain that in more than three decades the Environmental Protection Agency has only managed to test 200 of those chemicals. In that same amount of time, they’ve imposed regulations on only five. The manufacturers have provided little information about the long-term effects to human health or to the environment as a whole.

The sad truth is that it’s up to you to identify and limit exposure to the toxins around you.

Repeatedly, official agencies have ignored or downplayed the use of scientifically proven toxins rampant in our air, food, water, building materials, consumer goods, and products or treatments intended for our “better health.”

The Dirty Deals to Protect the Tobacco Industry

If you are not convinced of the hypocrisy involved in public health, consider the production of tobacco products. Cigarette use is a lifestyle toxin that most people know is dangerous for their health. It provides nothing of benefit to your body, it is highly addictive (by design), it damages you at the cellular level, and your natural detoxification systems – digestion, lymphatic, exhalation, and immunity – are unable to remove all traces that it leaves behind.

The toxins in cigarettes gradually build up, causing long-term effects to your body, increasing your risk of cancer and other serious diseases, and often leading to your death.

Despite millions of deaths directly related to tobacco, there remains more than 4,000 chemicals to be found in a single cigarette – 43 of which are known to cause cancer.

Just a few of these are tar, formaldehyde, cyanide, ammonia, arsenic, lead, and DDT (a dangerous insecticide banned in many countries).

Cigarette manufacturers are not required by law to list the ingredients of a product that more than 42 million people in the U.S. alone use daily. However, for the past decade, tobacco companies have provided a list of ingredients to the United States Congress, as well as the Department of Health and Human Services.

Those ingredients have never been released to the public.

Do they need to add these chemicals?  No, they don’t. But if they remove them, the tobacco is not as addictive. A cigarette is an “efficient nicotine delivery device,” according to a study on smoking published by the Department of Social and Behavioral Sciences, School of Nursing, University of California.

From the first report released by the surgeon general in 1964 titled Smoking and Health, there has been no doubt as to the danger of tobacco use. The government makes billions of dollars in taxes from smokers who support the tobacco industry. Sadly, shocking commercials are not enough.

Asbestos Exposure is Not “Old News”

Another well-known environmental toxin is asbestos. In use since the time of the Roman Empire, asbestos has had many uses – from embalming, to armor insulation, to a multitude of modern applications. Quarry workers in the first century were expected to die young from exposure and asbestos workers were unable to get insurance policies as far back as 1908. Yet it took another 80 years before its use was drastically curbed by the government in the 1980s.

Why? Profit, of course.

Asbestos is a cheap and effective material that is highly resistant to heat and fire. It has been used in cement, concrete board in kitchens and bathrooms, textured paint, insulation, roofing materials, vinyl, car parts, and heat resistant fabrics.

The World Health Organization (WHO) estimates that there were more than 100,000 deaths in 2004 directly related to asbestos exposure. They also state that 1.5 million people lost years of their lives due to repeated contact with this compound.

Currently, more than 125 million people face asbestos exposure in their place of work.

The Abundance of Heavy Metals

Your body would become desperately ill if you ate a sheet of aluminum foil, but many products contain aluminum that is applied to the skin, depositing the metal directly into your blood stream.

Experts estimate that we “consume” several pounds of aluminum, lead, mercury, and nickel every year. Government agencies wave this information off because it is delivered in “trace” amounts through our food, water, cosmetics, and many other sources.

What they fail to mention is that since your body is unable to process and flush these compounds, they build up in your cells and eventually become toxic.

If you are already deficient in zinc, exposure to cadmium will replace it inside your body. Lacking adequate levels of magnesium and manganese will allow toxic metals such as aluminum and nickel to fill those gaps. Too little calcium will leave a space that lead is happy to fill.

These examples are clear “profit over health” choices made by manufacturers and the government agencies that are supposed to monitor them. If you place your trust in government oversight committees to protect you from dangerous – even deadly – toxins, you are literally gambling with your life.

←
Previous
5 Diseases You Can Avoid by Maintaining a Healthy Gut
→
Next
Proton Beam Therapy: Medical Marvel or Harmful Hoax?