You are here: Home / Cancer Causes / The Dire Consequences of GMO Foods (video) 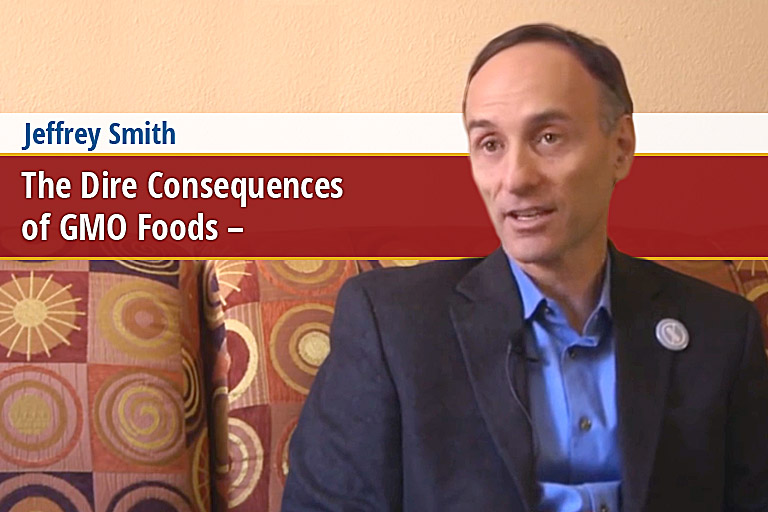 
Jeffrey Smith: Well, I just talk about one thing: GMOs. Genetically modified organisms. I’ve been interviewing scientists and translating the science into English for over 18 years. I’ve traveled to about 40 countries and I founded the Institute for Responsible Technology. We explain to people why to avoid GMOs and how. We have a shopping guide at nonGMOshoppingguide.com and a free iPhone application (Shop No GMO).

Ty Bollinger: When you were a kid you probably didn’t dream that you’d be a GMO researcher and advocate.

Jeffrey Smith: When I was a kid I never heard of GMOs and they hadn’t existed yet. So no, you’re right.

Ty Bollinger: So what got you into this line of research?

Jeffrey Smith: Well, I went to a lecture from a genetic engineer and he was absolutely adamant that it was completely inexcusable to use that technology for food because the technology was prone to side effects.

It would be absolutely unpredictable. And not only that, but even those [effects] that could be tested for were not being evaluated properly and they [GMO crops] were about to be planted.

This was in 1996 when I went to the lecture. Moreover, once they were produced and released into the environment they would cross pollinate, seeds would travel, and they would become part of the gene pool.

A self-propagating pollution of the gene pool that would last forever. So the only thing that lasts longer than genetic pollution… not global warming, not nuclear waste… is extinction.

When I realized the profound implications of this technology for all living beings and all future generations, I figured this guy needs a little help. He needs to get the word out in a way that’d be effective and to wake people up.

And I wasn’t expecting it to take this long but now we’re actually seeing a big wake up in the United States. People are rejecting GMOs in very large numbers and we see a coming tipping point very, very soon.