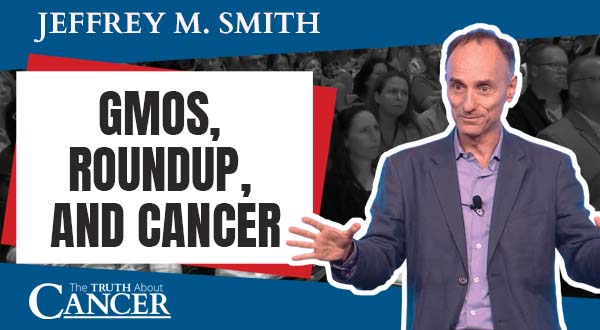 Ty Bollinger: Have you heard of Roundup? It’s sold in many garden stores as a weed killer. Millions of tons of Roundup is also sprayed on industrial food crops every year – especially GMO crops. The problem is that this poison does not just kill insects; it kills beneficial bacteria in the soil. It strips the soil of essential nutrients like zinc and copper that your body needs.

Charlene Bollinger: In this video you’ll hear from GMO expert Jeffrey Smith about the health consequences of this toxic pesticide and the shopping step you must take to have the safest food possible.

Jeffrey Smith: And so, when we think about GMOs and cancer, there are three areas that we like to talk about. One is the process of genetic engineering itself. It can create carcinogens and other things. The other is the BT toxin produced in mostly corn and cotton. And the third, which I want to focus more on, is Roundup.

Six major GMO crops are Roundup ready, engineered not to die when sprayed with Roundup herbicide. Soy, corn, cotton, canola, sugar beets, and alfalfa. All but alfalfa are more than 90% of the crops in the United States in those categories sprayed with Roundup. Because Roundup is used more and more, the weeds outsmart Monsanto and the farmers need more to kill the weeds. These herbicide-resistant weeds are driving up the use of herbicides by over half a billion pounds in the first 16 years of GMOs.

Let’s just focus on the cancer for a moment, because this is the venue for that. The World Health Organization, in March 2015, declared glyphosate, the active ingredient of Roundup, as a class 2A carcinogen. They said it causes cancer in animals; it causes mutations in human DNA, which can lead to cancer. Where it’s used in high concentrations in farm areas, there’s an increase in cancer. But there’s not enough human trials to say it’s definitely a cancer causer, so we’ll call it a “probable human carcinogen.” 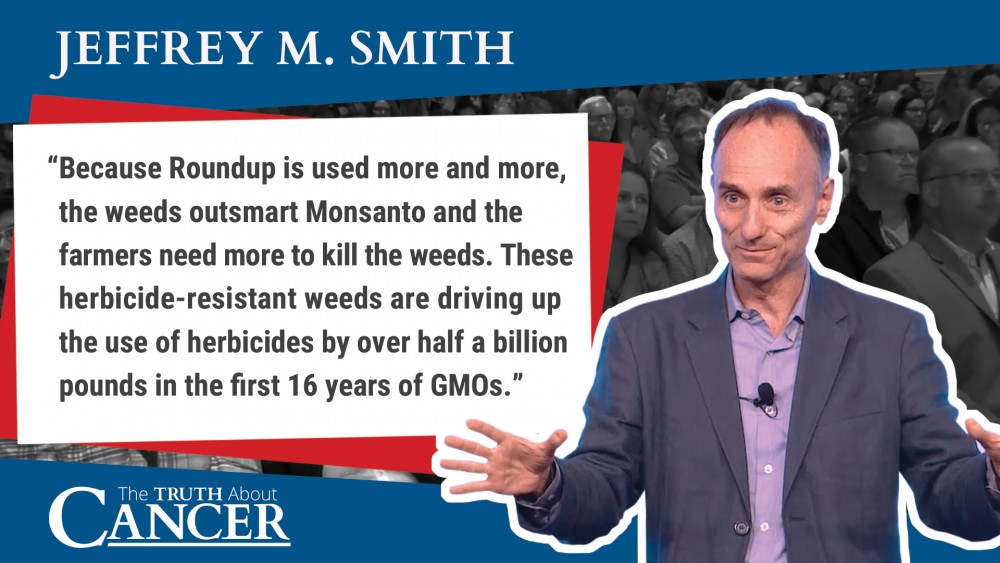 Now if we’re having so much Roundup poured in our food. It’s found in air samples, it’s found in rain samples, it’s in drinking water. Are we seeing an impact of Roundup on cancer? Well, if you plot the acreage of Roundup that has been sprayed, the amount of Roundup sprayed on the acreage that’s genetically modified, soy and corn, or you just look at the acreage of soy and corn, you see this is liver and bile duct incidence. You can see the green line, which is the pre-1990 trend line for those cancers, and then all of a sudden GMOs introduced in the late 1990s, that took off and so did this cancer.

This is correlation. It is not a guarantee that one causes the other. But we’ll see this, the context of this is very important, which we’ll see in a minute.

Let’s take a look at glyphosate, which is an interesting molecule, and figure out why it is so potent. The World Health Organization says it damages the DNA. That can lead to cancer. It’s also an antibiotic. According to The Journal of the American Medical Association, there’s a high correlation between antibiotic use and breast cancer use.

One reason why antibiotics are dangerous for cancer, you can find it on The Truth About Cancer website, is the microbiome.

Everyone’s talking about the microbiome. It’s the new tofu; everyone’s talking about it. It’s good for the immune system, it fights inflammation, it’s detoxification, it protects the barrier, and it can be damaged by antibiotics. And there’s many different research studies which explain how and why, and that it’s true. The inflammation can cause the cancer, even the metabolites, the things produced by those microorganisms, can be cancerous.

Ty Bollinger: Great information, thank you Jeffrey smith, about Roundup and about GMOs.

Charlene Bollinger: Wow. Jeffrey Smith just continued to wow me with his zeal for truth doing his research diligently and then bringing that research to us. Roundup is very dangerous, so thank you Jeffrey Smith for leading the path to freedom for truth and life. And until next time, thanks for joining us. God Bless.