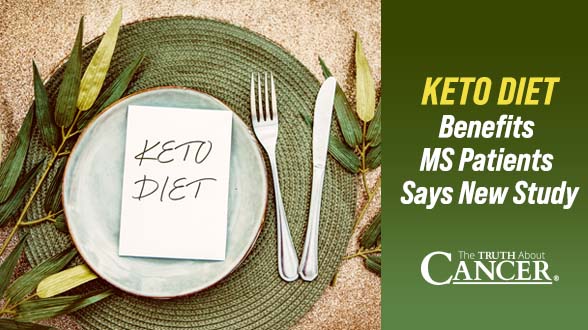 Across the globe, over 2.3 million people suffer from Multiple Sclerosis, or MS. Nearly a million of them are living here in the United States. MS is a disease in which the immune system eats away at the protective covering of nerves. The resulting nerve damage disrupts communication between the brain and the body, causing vision problems, tingling or numbness, chronic pain, paralysis, and fatigue.

Not surprisingly, a secondary result for many patients is depression. Emotional difficulties, including depression and anxiety, can often interfere with daily functioning more so than physical symptoms. Apathy or anxiety may have more power than muscle spasms or dizziness to hold someone back from enjoying life.

But a new study published in the Journal of Neurology Neurosurgery & Psychiatry has found that a ketogenic diet is not only safe for MS patients but offers clinical improvement in fatigue and depression. Relapsing MS patients enrolled in the 6-month prospective ketogenic intervention had significant reductions in fat mass and showed a nearly 50% decline in fatigue and depression scores, reported lead author J. Nicholas Brenton, MD, of the University of Virginia in Charlottesville.

A typical ketogenic diet recommends getting 75% of calories from healthy fats, 20% from protein, and only 5% from carbs. Normally our body uses sugar, also known as glucose, for fuel. However, we cannot make glucose in our body and only have about 24-36 hours’ worth stored in our muscle tissue and liver.

Once glucose is no longer available from food sources and we’ve exhausted our internal stores, we begin to burn stored fat, or fat from our food. By minimizing carb consumption, we change the very fuel our body uses to make energy, from glucose to fat. Our liver breaks down fat to fatty acids and glycerol, which are further broken down into chemical molecules known as ketones or ketone bodies – and these are used as fuel by muscles and other tissues in our body instead of glucose.

“Our study provides evidence that a ketogenic diet may indeed be safe and beneficial, reducing some symptoms for people with MS, when used over a six-month period,” says Brenton. “However, it’s important that people with MS consult their doctor before making any big changes to their diet, and that they be regularly monitored by a physician and registered dietitian if on a ketogenic diet.”

The findings echo those of a similar, earlier study by Dr. Brenton and his colleagues that found that a type of keto diet called the modified Atkins diet improved fatigue and depression in people with multiple sclerosis.

According to a review of previously published studies in the November 2021 issue of the journal Frontiers in Nutrition, researchers have found that people with MS who follow the keto diet for six months or more show evidence of potentially beneficial changes to their gut microbiome, with increases in healthy bacteria that may provide a neuroprotective effect against the damage caused by MS.

A study published in September 2020 in the Journal of Agricultural and Food Chemistry found that mice with the same inflammation of the central nervous system seen in people with MS saw improvement in motor function when fed with a keto-based diet. They also saw reductions in damage to the hippocampus of the brain, which governs memory and other functions and is often adversely affected by MS.

Obesity is a well-documented risk factor for MS patients, with dietary changes the most effective method for producing positive change. A study published in May 2019 in the journal Nutrients examined the satiating (satisfying) effect of following the keto diet as well as its effects on muscle mass and level of oxidation in 27 people with multiple sclerosis. Oxidation is the normal process of cell decay, but excessive levels of oxidation, or oxidative stress, can lead to inflammation and tissue damage.

The researchers found that following a ketogenic diet for four months reduced subjects’ perception of hunger before and after lunch and dinner — although not before and after breakfast — and additionally led to an increase in lean mass, decrease in fat mass, and lowered levels of oxidation and inflammation.

MS is an inflammatory disease that causes damage to the central nervous system. Research shows that the keto diet decreases inflammation, increases mitochondrial biogenesis (the process by which cells produce new mitochondria), and reduces levels of oxidative stress, which may be beneficial in MS symptoms, Brenton says.

“Additionally, fat — as opposed to carbohydrate — is a more efficient source of energy for the brain, which may be particularly important in a brain that is battling inflammation, as is the case in MS,” he says.

One potential reason for the nerve damage present in MS patients is an inability of the mitochondria to utilize glucose. Here, too, we see the potential benefit of a ketogenic diet. A study published in the November 2021 issue of the journal Neurology found that people with MS on a modified keto diet had lower levels of serum neurofilament light chain, a type of cell found in the central nervous system, or brain and spinal cord, that’s considered a possible sign of neurodegeneration. The researchers suggest a keto diet could be used as a possible treatment for progressive MS, in which neurodegeneration is the primary problem.

“If you go into ketosis, you produce different energy makers — ketone bodies — and they get through the blood-brain barrier so they can get access to the brain and be used as an energy source,” says Mary Rensel, MD, a staff neurologist and the director of wellness and pediatric MS at the Cleveland Clinic’s Mellen Center for MS in Ohio.

Keto diets do show some side effects, including lethargy, nausea, and vomiting due to intolerance of the diet, especially in children, who may also exhibit low blood sugar and nausea. But more often than not, these are symptoms of “keto flu” and are generally a short-term reaction to the drastic change in diet.

In adults, GI discomfort is a common side effect due to the high fat content of the diet. A prospective pilot study on keto diets reported a significant, progressive increase in cholesterol levels after a year. In some instances, dramatic weight loss and liver dysfunction were seen.

Studies have also reported deficiencies in trace minerals like selenium, copper, and zinc in patients on keto diets. It’s important to remember that consuming enough mineral-rich foods and supplementation of trace minerals is likely necessary while on the diet.