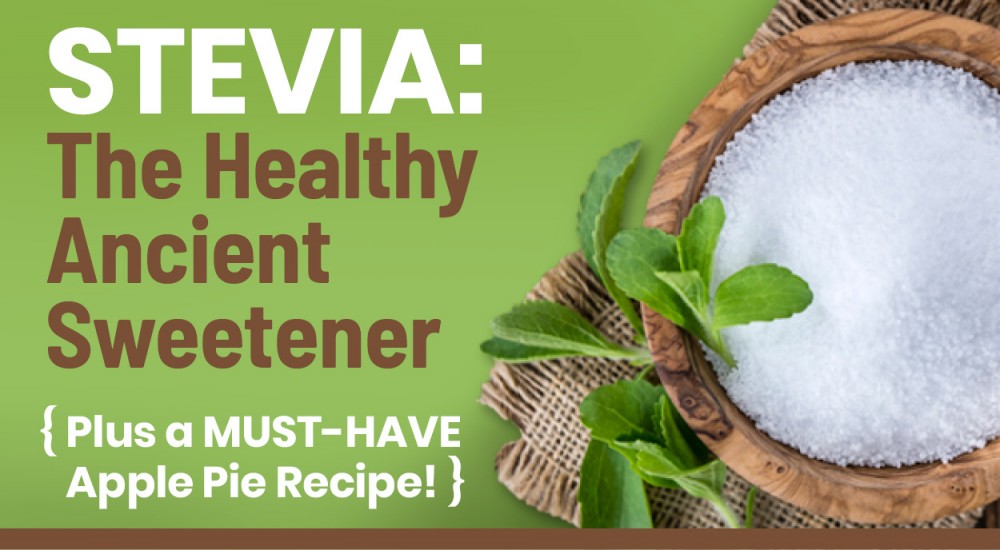 You’ve likely heard of Stevia, the popular sweetener that everyone seems to hail as the new healthy alternative to sugar.

But is the hype justified? Let’s take a look.

The stevia plant is a member of the daisy and ragweed family, also known as candyleaf, sweetleaf, and sugarleaf (scientific name Stevia rebaudiana Bertoni). It has been used for more than 1,500 years by the indigenous Guarani people of Brazil and Paraguay as a natural sweetener, medicine, and sweet treat.1

Stevia is unlike other sugar substitutes in that it’s derived from a plant rather than artificially synthesized. The Italian botanist, Moises Santiago Bertoni, is often credited with the discovery of stevia in the late 1800s. However, native Guarani people had already been using it for centuries to treat burns, colic, and stomach problems. They also habitually chewed the leaves as a sweet treat.

Today, the stevia plant is cultivated widely for those sweet leaves, which are used to make many commercially available, non-caloric, artificial sweeteners. The natural chemical compounds in stevia leaves that are responsible for its sweetness are known as steviol glycosides – specifically, stevioside, rebaudioside (which has 5 variations: A, B, C, D, E, and F), steviolbioside, and isosteviol.

Stevia is also a good source of other nutrients such as polyphenols, carotenoids, chlorophyll compounds, and amino acids, making whole-plant extracts the best option if you’re planning to add stevia to your diet.

Stevia is commercially available as three forms: green leaf stevia, stevia extract, and stevia blends. Green leaf stevia, used in South America and Japan as a natural sweetener and health remedy, is made by drying and grinding the plant’s leaves into a powder. Green leaf stevia is about 10-15 times sweeter than sugar, with bitter after taste.2

Most commercially available stevia extracts consist of 95% or more rebaudioside A glycosides. To be legally marketed as food additives, they are not allowed to contain other forms of rebaudiosides or steviosides.2

Unfortunately, most commercially available altered stevia blends contain very little of the actual stevia plant. Sometimes they have been known to even contain chemical solvents!

Are Steviol Glycosides Safe for Consumption?

Among the various steviol glycosides, stevioside, rebaudioside A, and rebaudioside C are about 250-300 times sweeter than sugar. Steviol glycosides are categorized by the U.S. Food and Drug Administration (FDA) as “generally recognized as safe” (GRAS). In other words, they do not need further FDA approval for use as food additives and may be lawfully added to food products sold in the US.3

For instance, high-purity rebaudioside A, known as Rebiana, may be added to foods and beverages. However, stevia leaf and crude stevia extracts are not considered GRAS and do not have FDA approval for use in food.

High-intensity, non-caloric sweeteners such as steviol glycosides that are used as sugar substitutes are needed in much smaller amounts to achieve the same level of sweetness. They typically contribute only a few, if any, calories when added to foods and typically do not raise blood sugar levels. In fact, steviol glycosides have been shown to have beneficial effects on blood sugar levels.4,12,13,14

Beyond their value as sweeteners, Stevia’s glycosides have been shown to act against multiple diseases, including cancer, diabetes, high blood pressure, inflammation, obesity, and even tooth decay.5 Promisingly, studies have also shown that stevia and its products and extracts are not harmful for us in any way.

Let’s take a closer look at some of Stevia’s many emerging health benefits.

It’s a well-known fact that sugar can contribute to cancer development and progression.6 On the other hand, various stevia extracts and compounds purified from stevia have been shown to prevent DNA replication in cultured human cancer cells, suggesting that it may protect against cancer.

For instance, a 2018 laboratory study showed that steviol is just as effective against 6 different types of human stomach cancer cells as the anti-cancer agent 5-fluorouracil.7 Similarly, steviol and the related compound stevioside have been shown to induce programmed cell death, known as apoptosis, in cultured breast cancer cells.8,9

In another study, a Stevia extract was shown to have antioxidant activity and cause cell death in cultured cervical, pancreatic, and colon cancer cells.10

Interestingly, a 2013 study showed that when stevia is added to natural colon cancer-fighting mixtures made up of blackberry leaf and natural sweeteners – including dried apples, prunes, figs, raisins, apricots, carrots, and sweet potatoes – the overall levels of polyphenolic antioxidants go up significantly.11

It’s always a good idea to buy stevia products in either plant or whole-plant extract form with both steviosides and rebaudiosides, as these have been shown to have a higher anti-cancer effect than isolated and purified steviosides alone.

However, stevia has been shown to significantly reduce fasting blood sugar levels, counter insulin resistance, and lower levels of harmful triglycerides in a laboratory rat model of diabetes.13

In a promising study published in 2010, 19 lean and 12 obese individuals were given so-called “preloads” of stevia, aspartame, or sugar on three separate days before their lunch and dinner meals.15 Interestingly, their food intake did not increase when they consumed stevia and aspartame, relative to sugar, despite the difference in calories. Self-reported hunger and satiety levels were not different between groups.

Indeed, multiple studies suggest that stevia’s glycosides and extracts of its leaves, flowers, and roots can help in the ongoing fight against obesity, high blood sugar, and liver disease. They may also be effective against hypertension and help to manage blood lipid levels.16,17

In a 2018 laboratory study, rats were given various doses of stevia extract for 8 weeks to examine the effects on their lipid profile. The study authors reported that feed consumption decreased, leading to reduced weight gain in these rats.18

Similarly, the results of a 2009 study from Rajasthan, India, show that when women with high cholesterol levels consumed stevia extract for a month, their levels of cholesterol, triglycerides, and LDL also went down significantly as their levels of HDL increased.19 This indicates stevia may prove to be useful in managing cholesterol and lipid levels.

An immunomodulator is any substance that helps to regulate the immune system and normalize the immune response. Stevia’s leaves are a source of several steviol glycosides, including stevioside – which has been shown to boost immune system activity at various levels, including increasing the numbers of immune cells and the levels of signaling molecules known as cytokines.20,21

Stevia has also been shown to have antimicrobial activity.22

Which Type of Stevia – and How Much – Should You Use?

Stevia is available online or at most local grocery stores, both as powder and in liquid form. Powders are best for cooking and baking, while stevia-derived liquid products can be used to sweeten coffee, tea, and smoothies.

Ideally, you should only use stevia products made from organically grown stevia crops to avoid pesticide and other chemical contamination. Although there are currently no genetically modified stevia strains grown anywhere in the world, even some organic versions of stevia contain additives. It’s always a good idea to read the label, especially since non-organic stevia products can sometimes be combined with non-caloric sweeteners made from GMO corn.

Do Stevia and Stevia-Derived Products Have Side Effects?

Unlike other non-caloric artificial sweeteners, stevia is not known to be harmful for us in any way.5,24

Taking supplements during pregnancy is always a concern. However, studies show that even in doses much higher than the ADI, stevia doesn’t have any effect on fertility, live birth rates, birth defects, or malformations.25

Some non-caloric artificial sweeteners have been shown to alter the composition of the bacteria in our gut, potentially altering our immune system. Fortunately, this has not been observed with stevia.26

Editor’s Note: This article was initially published in November 2018 and was updated in December 2022.

←
Previous
Herbs, Spice & Everything Nice: Your Guide to Healthy Holiday Eating
→
Next
What We’ve Learned from the Twitter Files | Part V