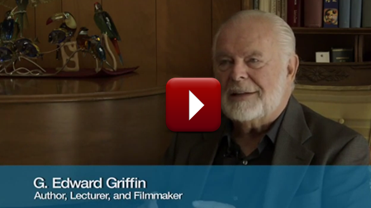 Ty Bollinger: Tell us about the book “World Without Cancer.”

G. Edward Griffin: “World Without Cancer” is, on the surface, it’s about a specific alternative cancer therapy called laetrile, that’s its common word. Its common title. The substance itself is really called amygdalin.

But on the surface it appears to be about that and, in fact it is, but it’s also about the bigger picture. The fact that the medical establishment, in the Western World at least today, is oriented very strongly toward drug therapy and radiation of course and some very expensive procedures, which in my view and the view of the doctors and researchers that I have relied upon for my research, it’s not the best treatment at all.

So it’s about the bigger picture about how the industry, the cancer industry, particularly the pharmaceutical cancer industry has dominated that field and not necessarily consciously, but as a result of that it has certainly filtered away all of these natural approaches for cancer treatment.

So that’s the real picture because it’s not just that the laetrile is necessarily the most effective treatment. I think there are many different types of treatments that are very good, but they all have one thing in common and that is that they come from nature.

Now that may not seem like a big deal but when you understand how the industry works you realize that if anything comes from nature it cannot be patented. It has to be invented before you can patent it, which is why the pharmaceutical industry is not interested in anything that comes from nature.

What they are interested in is to find out if something works in nature, take it to the laboratory, pull it apart, look at that molecule, see what the active ingredient is and then see if they can reassemble it and call it “ours.” Now they can patent it and that’s the bigger story.

I think once people understand that there’s this commercial bias that’s built into the industry and that bias is not just about money, but it’s about their lives and their health. Then it becomes a very, very important story and here comes the crusader galloping on his white horse. He’s got to tell his story.