Now, how many people have heard that when you’re sick, it’s natural to be depressed? One out of every two Americans at some point will be prescribed an antidepressant. Antidepressants are the leading prescribed drug on the planet. Something like 60% of the world’s population has experienced an antidepressant. And of course, they try to figure out the cause of depression. They look at blood tests, and this and that. “We can’t find anything wrong with you. You’re depressed. Here take an antidepressant.” That’s how it works. It’s not like, “Oh, you have arthritis, you have diabetes, yeah, the test shows that you have depression.” Is there a test for that? No. Because if they can’t figure it out, “Well, it’s depression. Get out of my clinic. Here’s a prescription. Have a good life.” That’s not how medicine should be practiced, but that is.

So, it’s associated that depression happens when a person has a reason to be depressed. Their cat died. They have cancer. They have heart disease. It’s natural to be depressed. Here’s the problem: what they found was that inflammatory cascade that defines cancer, and defines heart disease, and defines the entire cytokine storm, actually is a pathway where this ABCF1 issue starts showing up. Now you’ve got this protein that seems to be related to depression. They had seen this ABC1 was related to depression, but they saw it in the pathway in the cytokine storm.

So to test this, they took macrophages, or white blood cells, and they introduced a substance, an antidepressant, a drug, Lexapro was the brand name. They introduced this into the macrophages thinking that, okay, if there is a change— because Lexapro is an antidepressant, so it’s supposed to make a person feel better, right? So if we can take these macrophages, these white blood cells, that are depressed— I assume they were depressed. I don’t know how they questioned the macrophages. No, they basically looked at the macrophages, they wanted to introduce the Lexapro into them. And they wanted to see what’s going to happen to the ABCF1, thinking that if their hypothesis was correct that the ABCF1 was actually related to the inflammatory cascade and is actually related to depression. Then if we introduce this antidepressant, we should see some kind of a rise in ABCF1 in these macrophages, right? 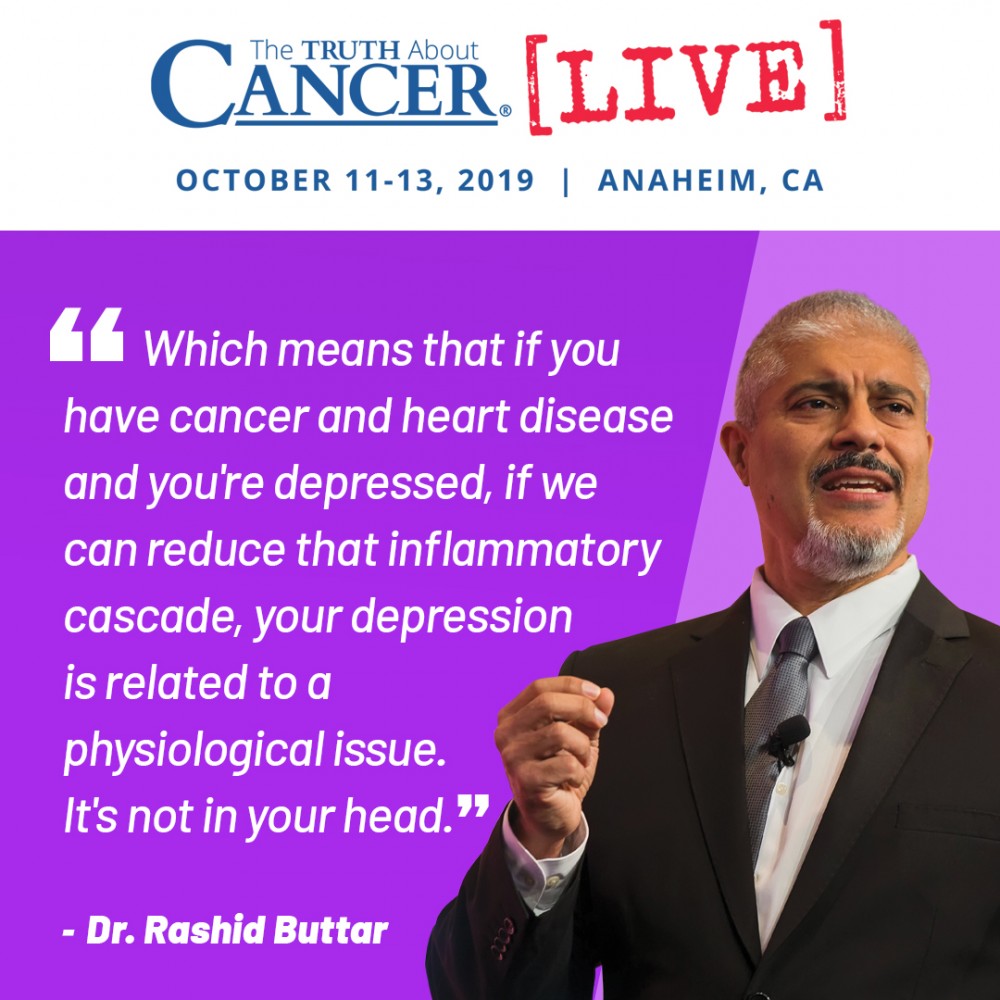 There are certain naturally occurring molecules— big pharma has always been based on what’s naturally occurring, and then they try to see if they can isolate it. Like Graviola, how many people know about Graviola? John Easterling showed Graviola on stage. Did you know that Merck tried to get a patent on Graviola back in the 1980’s-1990’s?

All drugs start from a natural place. We can take things such as soursop, which is Graviola, or saffron— there’s many different molecules that will have an association with negating depression. High-dose fish oils, we know that helps with depression. So one of my colleagues, Ashton, that’s sitting in the audience, made a mention to me, she goes, “What’s the big deal with talking about this anti-depression? We know that if you can reduce inflammation, we have an anti-depression effect. We’ve seen this in studies with fish oils with post-traumatic stress disorder, even alleviating suicide, so what’s the big deal?” The big deal is that now we can isolate what molecules and natural substances will naturally decrease depression. Did you notice I said, “naturally decrease depression”? It’s actually naturally decreasing inflammation because that will decrease depression.

But now they’re seeking out an inflammation cascade. So you make a base of that that’s specific to inflammation, which is heart disease, cancer, depression, arthritis, diabetes. All these things are inflammatory, but now you can add the Graviola for cancer, you can add the Hawthorn for heart disease, you can add whatever else you want. So the ABCF1 becomes not just a therapeutic aspect, but it becomes a targeting aspect. It allows you to target the inflammatory cascade so that you can actually now deal with the cancer inflammation, but also now deal with the depression that’s been associated in their mind because they have cancer.

The implications of that are profound. It will change how we see people and how we treat people. Because when you hear somebody is depressed or when they’re on an antidepressant, what’s the connotation that you think of?

Audience Member: Get over it.

Audience Member: Get over it.

Rashid Buttar: There you go, “get over it,” some people said. Other people may feel pity, or that poor person, they have mental illness. This is a physiological response. If you fall and hit your knee, it’s going to swell up. It’s the same thing, yet we’re treating this as something where it’s in the person’s head. So the implications of this are huge.