You are here: Home / Cancer Causes / Is There a Link Between Obesity and Cancer? (video)

Video Transcript: Is There a Link Between Obesity and Cancer?

Ty Bollinger: Before we started the interview you started to talk about some statistics, really alarming statistics about cancer. Talk about the amount of cancers that are actually caused by toxicity versus genetic. Can you share some of those statistics?

Dr. Fisher: Absolutely. Anyone who looks at the research will realize that we’re looking at a high incidence of cancer right now. They just changed the prediction for that. It was at North American males 50%  will have an incidence and 24% will succumb to it. And basically they just changed that, so in the next five years 57% more incidence will occur. When you start to look at some other numbers – 18% of all cancers are caused by infection. No one talks about that.

Dr. Fisher: Eighteen percent. 23% of all cancers are related to obesity. No one ever talks about that because obesity is running amok right now. This year overweight and obesity in the U.S. alone will hit 75% with 41% being obese. And they’ve already doctored the numbers, the body mass index, for declaration of that.

Genetics is small, 5 to 10 percent. Just other factors, whether it’s an ambient environmental radiation, non-ionizing, unlikely it’s ionizing. But that can all be lumped in there into these same factors.

Ty Bollinger: Right. So when you mention obesity, how would obesity impact cancer? Why would there be a link between obesity and cancer? Before you answer that, by the way, we just got back from some interviews in Latvia, in Europe. In Riga, Latvia.

There wasn’t an obese person in the country that we saw. Literally, in four days I saw two obese women and two obese men. And they were both from either England or the U.S. But the people there, because of their diet, they eat farm-to-table. No obesity. 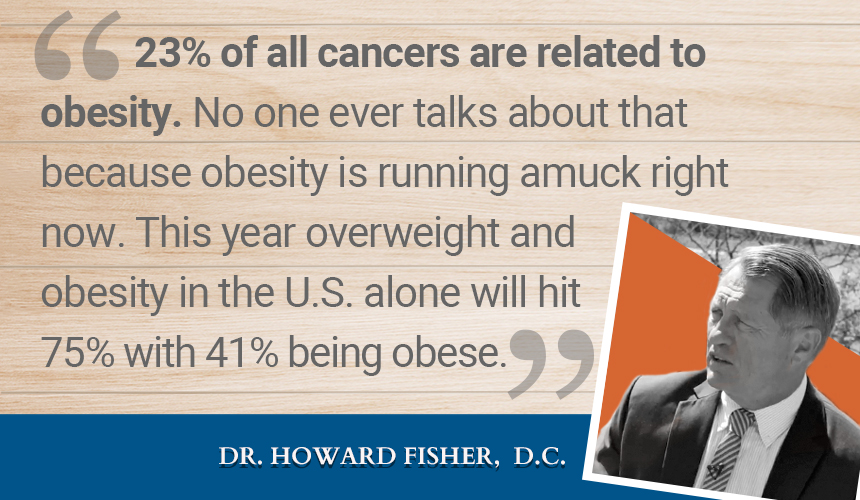 Dr. Fisher: I have a program rationale to stop obesity now and that’s something else just trying to give the information for people to that. It’s basically what you’re consuming with obesity. And obesity changes physiological function. The things that we see, we see—obese people are they diabetics? Sure, absolutely they are. Obese people, do they have high blood pressure? Sure they do. Obese people, do they have high triglycerides? Yes, and that’s not even getting into any of the less frequent factors about obesity.

So anytime we can change normal – that’s a scary word – physiological function by an onset of symptomatology, obesity, well we don’t know what’s going to happen. We can’t predict that and that’s why traditionally we do such a poor job of dealing with this disorder.

Ty Bollinger: Does the fact that when you’re obese you have a disruption in your hormone balance, could that have anything to do with the link to cancer?

I mean they still sell cigarettes. There was a big case in Quebec where they just won a fifteen billion dollar reward, just in the news today. Because cigarette makers were less concerned about health than money. You might find that as something that you see a little bit of.

But we see the same thing with our food supply today, don’t we? Look at genetically modified foods that are ubiquitous in North America. Talk about the toxicity of our food and how that might impact our health and cancer.

We can see that it’s absolutely everywhere. And so we don’t even have to realize what the actual factors are because it’s so overwhelming, that we know about the whites. How many people eat white sugar, eat white rice, eat white flour, eat it every day? Well, we know there’s relationships between that and a number of diseases, yet people are still doing it.