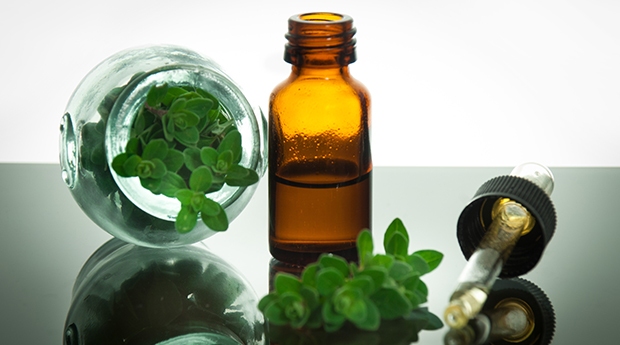 Inside a bottle of oregano essential oil are powerful plant-based chemicals that can help you fight a virus, kill fungi and bacteria, chase off parasites, boost your immune system, counter the effects of aging, and so much more. In this article you’ll find out how oregano is being used for healing, the latest research, and 14 practical tips for using it.

Oregano (Origanum compactum, Origanum vulgare, Origanum majorana, Origanum onites, Origanum minutiflorum), is an earthy, herbaceous, aromatic herb from the Lamiaceae (mint) family. Oregano has a long history of use spanning four millennia (yes, not just centuries but millennia!) due to its healing properties and popularity in cooking. The latest research confirms that oregano has potent anti-aging, anti-viral, anti-bacterial, anti-cancer, anti-diabetic, anti-fungal, anti-mutagenic, anti-parasitic and anti-inflammatory properties (all of the important anti’s!).

A 2011 French study found that oregano contained 46 compounds, the predominant phytochemical (natural plant-based compound) being carvacrol. A recent search of the PubMed database revealed over 1,200 studies on carvacrol − a phenol that works in an interesting way against bacteria. It breaks through the outer cell membrane that protects bacteria from being discovered by the immune system. This then allows the immune system to detect and destroy invading bacteria. Yet for healthy cells it is completely non-toxic, such is the wonder of nature.

Along with carvacrol, oregano essential oil also contains thymol, gamma-terpinene, para-cymene, beta-caryophyllene, rosmarinic acid, and myrcene, among many other constituents. Like green tea, oregano has a high quantity of polyphenols, tannins, anthocyanins, and flavonoids − all of which make it an excellent anti-cancer and anti-aging essential oil. These effects are mainly due to the high phenol content of oregano. In fact, oregano tests higher in phenol content than eight other common herbs.

Oregano’s antioxidants are known to protect us from damage by free radicals. It neutralizes free radicals while repairing damage which has already occurred. This helps to slow the aging process, slowing macular degeneration and vision loss. It also helped delay the degeneration of aging muscles, wrinkled skin, hearing loss, and nerve disorders.

There has been extensive research into the positive health benefits of oregano essential oil. Below are just a few of the important findings… 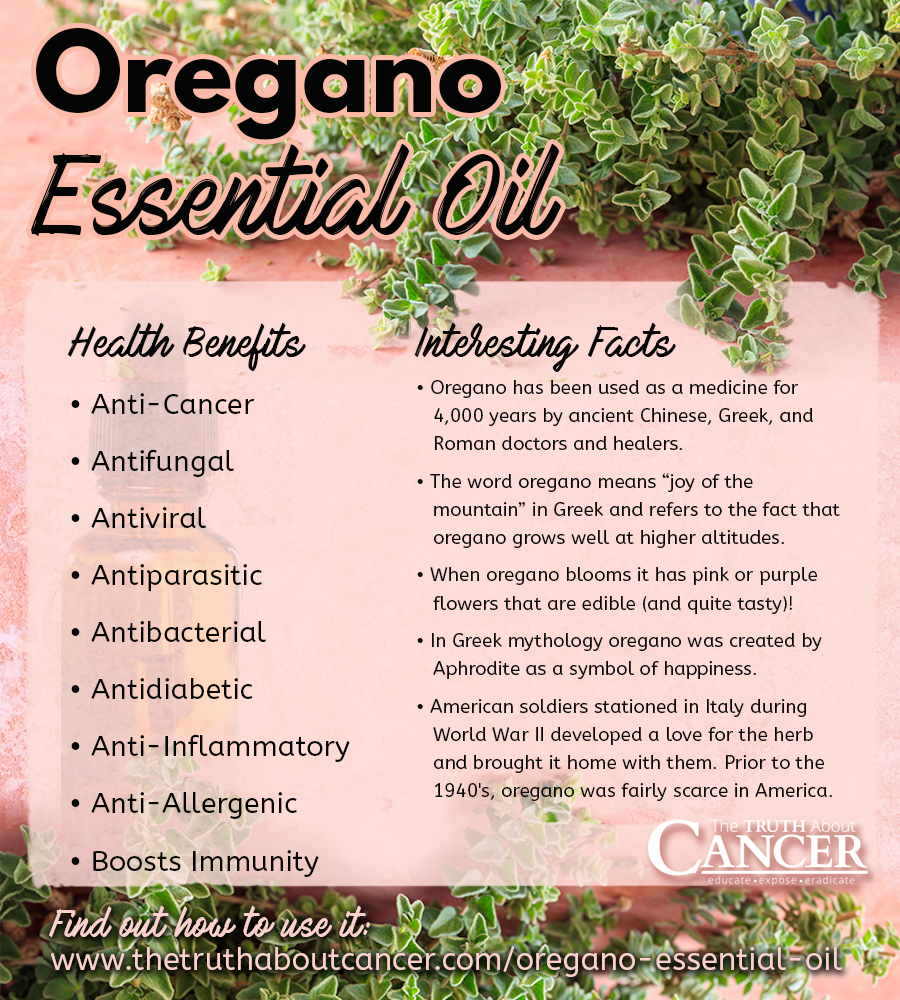 A 2016 Indian animal study found that carvacrol (one of the predominant phytochemicals in oregano) had a protective effect against colorectal cancer.

A 2011 French study also found oregano to have anticancer activity against MCF-7 breast cancer cells. This research mentioned that oregano also had a high concentration of antioxidants, as well as being a potent anti-malarial.

In addition, oregano has something to offer those whose breast tumors are not hormone driven. Researchers in India in 2010 discovered carvacrol induced apoptosis and had an anti-proliferative (anti-spread) effect in human MDA-MB-231 metastatic breast cancer cells. These cells are estrogen-receptor-negative, progesterone-receptor-negative, HER2 negative (also known as triple negative breast cancer).

Exciting 2015 research reported in Oncotarget by Canadian researchers discovered that carvacrol reduced the migration, cell viability and invasion of U87 glioblastoma cells, an aggressive form of brain tumor.

Other Anti-Cancer Effects of Oregano Oil

2007 research by Moroccan scientists found that oregano has anti-mutagenic effects. A mutagen is something that alters genetic material, usually DNA, and this can lead to cancer. Oregano’s ability to suppress mutagens make it very valuable indeed.

Ancient Greeks and Egyptians used oregano as an antidote to poison. Jump forward a few thousand years and modern science is catching up. A significant 2014 study reported in Clinical and Investigative Medicine found that for rats receiving the drug methotrexate, carvacrol helped to protect delicate kidney tissues from the toxicity of the drug. Methotrexate is a commonly used (and highly toxic) drug for treating, among other things, cancer and rheumatoid arthritis.

Jahahreeh Finley, patent attorney and founder of Finley BioSciences, recently stated in a June 22, 2016 LinkedIn article that AMPK, a key metabolic regulator, is turned on by carvacrol. This enhances signaling mechanisms critical for activation of T-cells, a key component of the immune system. Finley stated that “AMPK activation likely represents a central node that links the creation of all human life.” He went on to state that “if evidence continues to accrue implicating AMPK activation as a central mediator in the creation of all human life and the potential eradication of diseases thought to be incurable (e.g. HIV-1 and glioblastoma), a paradigm shift in the assessment of disease etiology and treatment is inevitable.” That’s one powerful statement!

Oregano oil effectively protects the body against many different fungal infections. It is particularly useful against Candida albicans. Italian research, reported in 2016, assessed the sensitivity of 30 different vaginal strains of C. albicans to 12 essential oils, including oregano. Researchers determined that oregano and five other oils inhibited the growth and activity of C. albicans more efficiently than clotrimazole, a commonly used antifungal drug.

2016 Brazilian research investigated the effect of three essential oils, including oregano, on Pythium insidiosum. This is a water mold which causes a deadly tropical disease known as pythiosis in mammals and humans. Conventional antifungal drugs have proven ineffectual. Researchers found that oregano oil (Origanum vulgare) had the highest kill rate, especially when combined with peppermint.

A 2014 American study reported in Journal of Applied Microbiology found that oregano essential oil was able to inactivate murine (mouse) norovirus within an hour of application. Researchers stated that carvacrol from oregano has the potential to control human norovirus, which most commonly causes gastroenteritis.

2015 research from Argentinian scientists found that thymol (one of the phytochemicals in oregano) was effective against a tapeworm parasite that causes cystic echinococcosis. This disease can affect the liver, lungs, and other organs.

In 2010, Portuguese scientists found that essential oils containing high quantities of carvacrol, including oregano, were effective against giardia, a nasty parasite of the gastrointestinal tract.

Moroccan researchers in 2009 investigated the effects of oregano essential oil on two strains of bacteria, Pseudomonas aeruginosa and Staphylococcus aureus. They reported that oregano induced membrane damage and exhibited potent antibacterial effects against both strains.

Joint Serbian and Greek research reported in 2016 in the Journal of Food Science investigated the effects of oregano on Type 1 diabetes. Researchers found that oregano protected mice from development of hyperglycemia by reducing proinflammatory cells. Researchers stated “this plant extract could represent a basis for future diabetes therapy.”

Researchers from Iran, America and Germany collaborated on a study reported in 2016. They investigated chitin − produced by insects, fungi, and other organisms − and implicated in chitin-induced asthma. Researchers found that carvacrol and thymol potently inhibited inflammatory responses.

In a study reported in Natural Product Communications in January 2016, researchers investigated the bioactivity of oregano and one other oil. They found both oils had anti-inflammatory, anti-Alzheimers, and insecticidal properties.

Rosmarinic acid is one of the primary phenol antioxidants in oregano. Japanese researchers in 2014 reported that rosmarinic acid possesses anti-allergenic activity by inhibiting an enzyme known as alpha-glucosidase, also associated with diabetes mellitus.

The potential of oregano essential oil for boosting immunity has been widely researched. Hundreds of studies, too numerous to mention here, have been carried out on animals which prove beyond a shadow of a doubt that oregano has potent immune-stimulating properties. Indeed, many farmers use oregano for their livestock for exactly this reason.

Oregano also has many centuries of oral use for human immunity. It appears to work by stimulating the production and function of white blood cells, the body’s first line of defense against invasion by fungi, bacteria, etc.

Russian research reported in 2014 analyzed the effect of ionizing radiation on mice. They found that taking low doses of certain essential oils, including oregano, along with their drinking water for six months increased the quantity of antibody-forming lymphocytes in their spleens.

Dutch researchers in 2010 found that the carvacrol in oregano promoted T cell responses in mice with autoimmune arthritis.

14 Ways to Use Oregano Essential Oil

Due to its phenol content, oregano is a HOT oil. Be cautious when using it. Always dilute oregano with an organic carrier oil prior to use as it could irritate the skin or nasal membranes.

Never apply essential oils inside ears (externally is okay), anywhere near the eyes, or other sensitive parts of the body.

It’s best not to use oregano oil with infants and children under age 5. Nursing and pregnant woman should also avoid oregano because it can possibly increase uterine circulation leading to a miscarriage.

People who are allergic to plants such as mint, sage, and lavender may have a reaction to oregano oil.

If you intend to use oregano essential oil for medicinal purposes, please know that essential oil quality matters. Find out whether the supplier of the essential oil you wish to use employs organic growing methods, and knows how to properly distill oils. Buy your oils from a trusted source because if they are improperly grown or distilled, they can have toxic chemical residues which could be harmful. 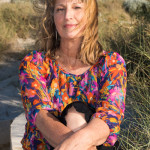