You are here: Home / Uncategorized / FDA Takes Only Months to Approve Pfizer Jab Yet Cannabis Remains Schedule 1 Despite Centuries of Data 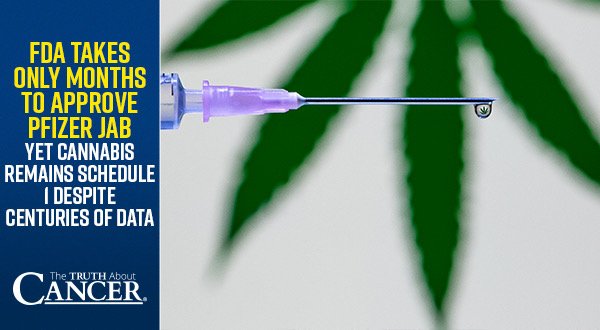 Since Dec. 11, 2020, the Pfizer-BioNTech COVID-19 Vaccine has been available under the Food and Drug Administration’s Emergency Use Authorization in individuals 16 years of age and older, and the authorization was expanded to include those 12 through 15 years of age on May 10, 2021. On August 23, 2021, it was granted full approval by the FDA.

The Pfizer-BioNTech COVID-19 Vaccine now becomes the fastest created, deployed and subsequently approved vaccination in history. Previously, the fastest vaccine to go from development to deployment was the mumps vaccine in the 1960s, which took about four years.

The swift approval of the vaccine illustrates just how fast the government can react if it wants to do so. On the contrary, however, there have been hundreds if not thousands of studies on the benefits of cannabis to safely treat multiple ailments and diseases, spanning the course of centuries, yet the FDA has failed to approve its use for anything.

To be clear, the FDA has approved patentable pharmaceutical synthetic compounds such as dronabinol. The pharmaceutical patented drugs Marinol and Syndros both use dronabinol which is nothing more than a chemical synthetic equivalent to delta-9- tetrahydrocannabinol (THC) — but the plant-based version you can grow in your own home remains off the list.

Harvard and other Ivy league research has shown the ability of cannabis to treat chronic pain faced by millions of Americans from conditions like multiple sclerosis, and nerve pain in general. Yet the FDA remains mum. They did however, approve opioids for the treatment of pain and judging from the nearly 100,000 people who’ve died in the last year alone from overdoses, we’ve seen how that turned out.

While the government offers lottery tickets, beer, and money for people to take the jab, in many states across the country, those same governments will kidnap, cage, or even kill you if you possess cannabis.

Nothing highlights the hypocrisy, immorality, and sheer idiocy of the drug war quite like marijuana prohibition. Here we have a medicine that kills cancer cells, saves the lives of countless epileptic children, heals broken bones, relieves pain, treats PTSD, is not dangerous, and exhibits a variety of other incredible benefits – yet the state will kill you over it.

The hypocrisy of cannabis remaining a Schedule one drug while the FDA grants approval to drugs like Solvay Pharmaceuticals’ Marinol cannot be understated. Both Marinol and Syndros contain an exact chemical copy of the THC molecule and produce the same effect as cannabis, however, you cannot grow Marinol or Syndros in your backyard, therefor it is illegal.

You cannot make obscene profits from the patent of a plant, because luckily, the state has not granted their mega–corporations the ability to patent nature, yet. The contradiction here is that you can make nature illegal, and then recreate nature in a lab using chemicals, put that illegal part of nature, available for the profit of a single monopoly, into a pill and make millions. All the while, the folks who uphold this system of monopolistic domination over what we can and can’t put into our bodies, are the same ones mandating everyone take their jab.

If we are to believe that the FDA, with a dark history of corruption, which has acted as a revolving door for lobbyists and industry insiders, truly has our best interests in mind, why then, have they not approved a plant that has never killed anyone in thousands of years of history?

Why has the FDA approved and regulated cigarettes, alcohol, opioids, and a slew of other drugs which have killed millions of people — yet cannabis is only approved for production by those who hold a monopoly on the synthetic version?

According to the FDA, their reasoning behind the refusal to approve cannabis products is to protect us. Seriously.

Selling unapproved (cannabis) products with unsubstantiated therapeutic claims is not only a violation of the law, but also can put patients at risk, as these products have not been proven to be safe or effective.

When reviewing the FDA’s track record on drug approvals, it becomes outright laughable that they expect us to believe that cannabis is not approved — to keep us safe. We aren’t talking about a few drugs slipping through every now and again either.

According to researchers at the Yale School of Medicine, one third of all drugs approved by the FDA had “major safety issues.” According to the data, 71 of the 222 drugs approved from 2001 to 2010 were withdrawn, required a “black box” warning on side effects or warranted a safety announcement about new risks.

It took roughly 4 years after each of these drugs’ approvals for the safety concerns to come to light, according to the study — with the majority of issues among psychiatric drugs, biologic drugs, and drugs that were granted “accelerated approval.”

So long as we rely on a corrupt group of unelected bureaucrats to make decisions about our health, this is the paradigm in which we will live. Essentially, the FDA acts as a gatekeeper of monopolies. If you have the resources to navigate their web or regulatory madness, your drug will be approved and your competition stifled — actual safety be damned. Remember that every single dangerous drug recalled by the FDA, was once approved by the FDA.

This is all done under the guise of platitudes like “safety” and “consumer protection” but in reality shields unethical companies from liability while granting them a competition-less environment in which to thrive at the expense of beneficial competition. It is time we rely on someone other than lobbyists and special interests to decide what’s best for us.

As Ron Paul says, “The fact that more people die from FDA-approved drugs than illegal drugs should be enough of a reason to send the FDA into the dustbin of history.”

This article was originally published on thefreethoughproject.com. 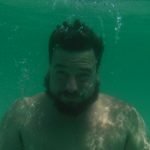 Matt Agorist is an honorably discharged veteran of the USMC and former intelligence operator directly tasked by the NSA. This prior experience gives him unique insight into the world of government corruption and the American police state. Agorist has been an independent journalist for over a decade and has been featured on mainstream networks around the world. Agorist is also the Editor at Large at the Free Thought Project.