You are here: Home / Cancer Treatments / The Power of the Placebo Effect (video) 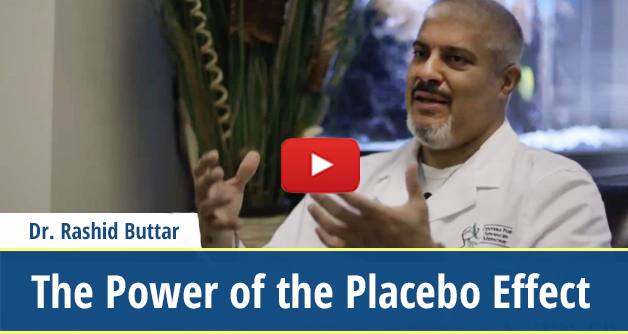 Video Transcript: The Power of the Placebo Effect

Ty Bollinger: Isn’t the definition of a placebo anything that works less than 30% or 20% of the time?

Dr. Rashid Buttar: Well, I don’t know what the definition of a placebo [is], but I’ll tell you this. I think that in modern medicine, this demonization of the placebo effect is the most ridiculous thing. We should be harnessing it.

Ty Bollinger: If it works.

Dr. Rashid Butter: I can’t tell you how many times I’ve used placebo on purpose, you know? When I was in general surgery I was part of our surgical rotation. You have to do trauma surgery, you have general surgery, different types of surgery. And when we did trauma at Brooke Army Medical Center, a large trauma center. As well as at Baylor in Houston. So I spent a lot of time in both of those hospitals.

But we had a lot of drug addicts that would come through… gun shot wounds, knifings, drug deals gone bad or whatever. And while they’re in recovery after the surgery, they may be in the hospital for a month, two months, three months… these people are going through withdrawals. Big time withdrawals. From alcohol, from drugs, or whatever.

And I got the reputation, among the people that were in the hospital, that I would take care of their issue if they had an issue. Well, the reason I got this reputation… when you got a guy that’s been hooked on drugs for more than half his life, he’s in the hospital, he’s going through withdrawal…

You know, “I’m having pain, chest pain and doc you got to do something for me.” And I’d look and go, “Hey listen, I can get kicked out of my residency program if I do this, all right? You can talk to the nurse.” And the nurse already knows what’s going on and she argues, “No Dr. Buttar, we can’t do this.” And I’m like, “We have to, he really needs this. It’s only one time, right? You’re only to ask for this one time?” And he’s like, “Yeah doc just one time.”

And you’d give him this hit and say, “this is really, really some strong stuff, okay? This isn’t even…”

“What you’re going to give me Sufenta? That’s so good.”

And then you give him this thing and they’d go “Oh yeah, I feel it; I’m feeling better,” you know? And you’re just giving them saline. But the power…

Ty Bollinger: Power of the mind

Dr. Rashid Buttar: The belief—they believed it was something great. It’s a whole orchestrated… you know, it was like a soap opera we had going on. Like five or six people all involved with this.

The person felt like we gave them something. They were willing to now perform for you because you did something for them. They thought that you just gave them something that really took care of their addiction. And it was all in the mind. It was just saline. And more than half the time it worked.

Now you’re telling me that we should just write that off? Why? Because you know what? You can give a person a drug and you wouldn’t get that kind of effect. We should harness that power.

So if we can actually elicit that type of a response in an individual, where we can get a benefit in that individual from just the power of belief, without changing their physiology, it’s our ethical and fiduciary responsibility as healers, as doctors, to harness that power and get that result.

Because if we can do so with the least harm… that’s the first part of being a doctor, right? Do no harm. And if you give somebody narcotics you are affecting them in a negative way. You’re affecting their liver. There is harm that’s being done.

So, if we can get the same result without giving them a narcotic, why shouldn’t we? And why is that poo-pooed? Why is that ridiculed that, “Oh you got this result from a placebo?”

You should get a Nobel Prize if you can elicit a response from a placebo. As far as I’m concerned, at least.