Ty Bollinger: I honestly find it hard to believe that you’re almost 65.

And your buddy Mike Adams, he’s all over food. I’m all over food, so my first factor is diet. Watch what you eat. And people go, “Why?” I go, “So you don’t hurt yourself.” And I use Mike’s quote about the food chain being perhaps intentionally designed to end humanity. I like that one.

So watch what you eat. Two, find a nutritional source. Find something that’s going to give you nutrition because it’s not in the food chain. We can see that from the incidence of disease. So for me, my primary source of nutrition is moringa oleifera. I’ve written three books on it and I think it’s a wonderful plant?

Three, exercise. Now, you used to lift in the big time. So you understand exercise. Exercise is important for your entire body. Absolutely necessary.

Fourth point, meditation. I don’t care if it’s religion. Any form of spirituality. For me it’s walking around this beautiful golf course right here thinking of nothing but that little white dimpled ball. And the next time I hit it, I am generating a different brain wave.

Four, good quality air. How many people sit inside where everything is off gassing all the time and never get out? 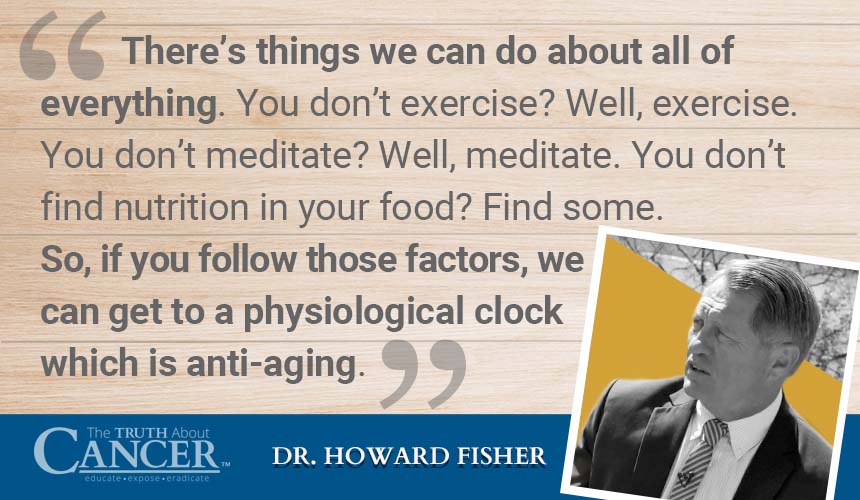 Six, good quality water. Well, you’re in Canada now. We have more water than anybody and we still have to make sure it’s good quality.

But if you examine what a cell phone is, a little battery powered device is not really dangerous. What it can do, some of the functions, can lead to danger. It’s like a car parked in a parking lot never gets into an accident that’s its fault. But it can be involved in an accident if someone hits it.

So a cell phone, a little battery powered device, doesn’t really do much from that perspective. Now the carrier wave, I don’t think our body can understand that. So what factor is it? The information that we are transmitting. That’s the thing that’s coming in between 0 and 100 hertz, that our body is being affected by. That’s where the problem comes in.

So who’s doing that? You are, I am, we are. We’re all doing that. Information, data, information, all affecting us. So is it the cell phone provider? No. Are they allowing us to do that? That’s like saying you got drunk and crashed your car because someone manufactured alcohol. No. You drank the alcohol. So the reality is we’re responsible, we have to take responsibility.

Otherwise you’d have a date stamped on the bottom of your foot. “You were born here and you’re going to do here,” so best before. Got it on milk, has it on orange juice. Has it in the supermarket. No “best before” date on humans.

Ty Bollinger: So, in light of what you just said Dr. Fisher about the date stamp. Isn’t that what an oncologist does when a cancer patient is diagnosed and they say, “You got advanced liver cancer, you got three months to live.” I mean they just date stamp them. Is that wise and is that not the same thing in as, in effect, as giving them a death sentence?

Dr. Fisher: Well, it is a death sentence. But understand, on a previous episode of the “The Truth About Cancer,” I believe that you had someone espousing what most oncologists would do if they had cancer. What was it 90%? Over 90 %?

Ty Bollinger: Right around that, yes.

Dr. Fisher: Around 90% would not follow their own protocols.

Dr. Fisher: So, the doctors are being honest. That’s all. Because they understand that given certain parameters there’s very little we can do by the parameters that they’re using. So I don’t hold it against the doctors. I think it’s a system that people are inclined to follow. And I don’t want to point fingers.

I just want people to be more compliant about dealing with their own health. I was fortunate enough to sit down with the head of biological research with Samsung. Very small company in Korea.

Dr. Fisher: Very small company. And he told me, “Listen, we understand that there is an issue. We can’t figure out the issue because it’s not coming from our phone. The research would take twenty years to try and break down and figure out is it one percent cell phone, is it three percent carrier wave, is it 96 percent people using it, is it two percent cell phone tower? We can’t figure this out. It says in the manuals, ‘Don’t hold them next to your body.’ Alright.”

Dr. Fisher: There you go. Why would you eat food—it’s the same thing, all the areas, it’s the same thing. Would you go drink out of that pond? I wouldn’t. I don’t know what’s in there, but I don’t think it’s clean enough to drink. But some people are doing that with their diets.

The food they put in their body is no better for them than drinking out of a puddle, or a pond, or your toilet. Not the clean water in the toilet, the other, which may be even better than a lot of the other things. You just get a lot of E. coli that kind of lives where that is. Take the steps that you need to move in the right direction.

Ty Bollinger: Right. Dr. Fisher, I think that’s good advice. To take control over what we’ve been given control over, which is our food, water, what we put into our body, the amount of exposure that we get to those cell phones next to our body. Keep them away.

←
Previous
Is There a Connection Between Antibiotic Use and Cancer?
→
Next
Cancer Survivor Story: Rosa Curiel (Breast Cancer)