You are here: Home / Cancer Treatments / Is PSA Testing for Prostate Cancer a Good Idea? (video)

Ty Bollinger: Let’s talk about PSA tests. Are they a good diagnosis for prostate cancer? Do they ever create false positives? What’s your take on the PSA and what does PSA test stand for?

The founder of the PSA test has come up with a couple of articles recently saying that he didn’t design that test for everybody to get it to diagnose prostate cancer. He thinks it’s a wrong therapy that we’re doing. Eighty percent false positives with the PSA testing and here we have the American Cancer Society and the powers that recommend doing yearly PSA screenings.

Dr. David Brownstein: They backed off a little bit from that recently. But basically they’re recommending yearly PSA testing for men over the age of 50. What happens is when the PSA elevates, which it can elevate from a lot of reasons besides cancer − prostatitis, if the prostate’s been stimulated within 24 hours of the blood testing…

Dr. David Brownstein: Anything that causes inflammation. Then they go into the whole cancer industrial complex themselves, where they’re getting ultrasounds, biopsies, chemotherapy, surgery, radiation, and most men with prostate cancer can outlive it. If they don’t do anything, they’ll end up dying of something else.

So, we’ve got a whole mess on that and, again, we need to search for the underlying cause of why one in three men have it, and we need to certainly do a lot less therapy on men with prostate cancer. We’re not saving enough men from it and putting way too many men through too many toxic and traumatic therapies for it. 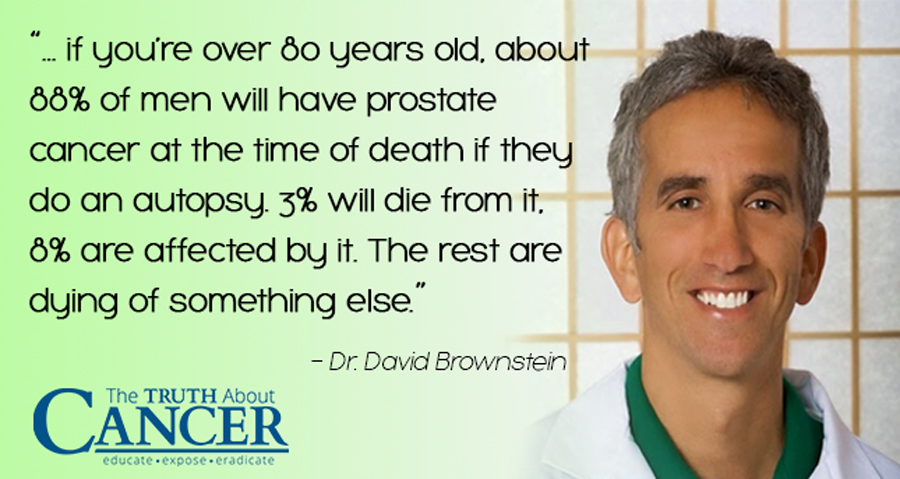 Ty Bollinger: You mentioned that many men will outlive it. I think it was Dr. Dick Ablin, or maybe it was [Dr.] Thomas Stamey, I can’t remember who, but both of them have been involved with the PSA test for a long while—said that most men will die with prostate cancer, but few will die from it.

Dr. David Brownstein: That’s right. I think the numbers are if you’re over 80 years old, about 88% of men will have prostate cancer at the time of death if they do an autopsy. Three percent will die from it, 8% are affected by it. The rest are dying of something else…

Ty Bollinger: They live with it and don’t even know.

Dr. David Brownstein: We’re treating every man as if it’s the same thing and it’s just a disaster.

We rely on health heroes like yourself to help us spread the word on this important, life saving information. Please share with friends and family.

←
Previous
Journaling: Therapeutic Enrichment for You and Your Family
→
Next
7 Ways to Keep Your Mind Sharp at Any Age