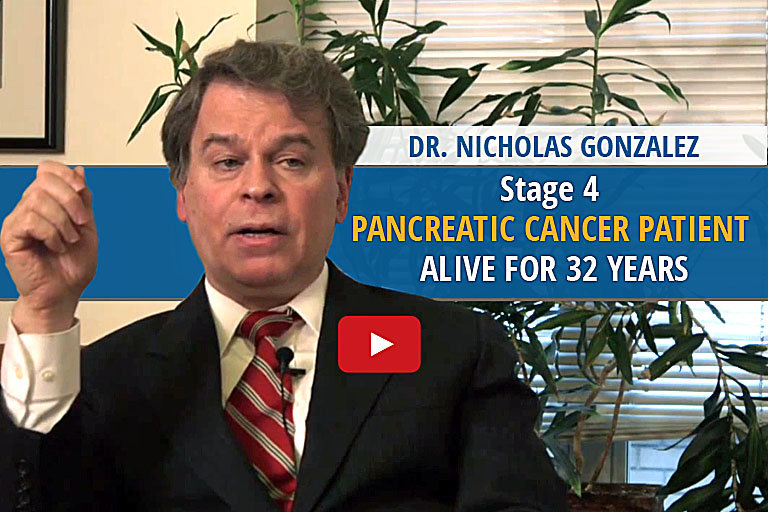 
Ty Bollinger: What was the name of your 2010 book that you finally got published?

Dr. Nicholas Gonzalez: “One Man Alone: An Investigation of Nutrition, Cancer and William Donald Kelley.” In there we have 50 case reports. Now, initially the patients actually gave us permission not only to use their medical records but to use their names, but with the internet… a lot of them are still alive and in their 80s and 90s.

We didn’t want them being harassed and reporters tracking them down so we blacked out their names with one exception… Arlene. I can use her name because she is a good friend. In fact, she called today – Arlene Van Straten – she was one of Kelley’s great patients and I now follow her. 1982, Appleton, Wisconsin. Typical American success story. She and her husband ran a gas station 7 days a week and worked their tail feathers off; added a store to it. They were later bought out by a big chain and let’s put it this way… they were able to put their kids and grand kids through college.

She starts getting gallbladder pain and the doctor said, “You’ve got a gallbladder problem.” This is 1982, before they routinely did CAT scans. They took her to surgery to take out her gallbladder and opened her up. She had a tumor in her pancreas, tumor in her liver; they biopsied the liver lesions and it is adenocarcinoma – stage 4 pancreatic cancer. They close her up.

She meets with an oncologist and chemo wasn’t going to do anything in 1982. It still does nothing today in 2014. She goes to the Mayo Clinic and I have the note from the Mayo Clinic guy who said, “I’m not going to give you chemo. It will just ruin your quality of life. Enjoy your life.” She went to the best of the best and they said they can’t do anything.

She learned about Kelley from this 32-page book “One Answer to Cancer (1969)” at a local health food store. She reads it, calls Kelley and he said, “Well, I’ve trained this chiropractor locally and he trained some people who do it really well. He is near your town, why don’t you go see him?” And she does. She never went back to a doctor and never had it scanned. The fact is, here it is 2014 and she is alive and well. Interestingly enough, today she called and said she wants to chat, usually it’s about her family. She is 32 years out… in August [2014] it will be 32 years.

Stage 4 pancreatic cancer, biopsy proven with liver metastases confirmed at the Mayo Clinic. To put it in perspective and to give Kelley his credit, I searched the literature religiously. I know of no patient in the history of medicine with stage 4 pancreatic cancer, adenocarcinoma of the worst kind, biopsy-proven liver metastases confirmed at the Mayo Clinic. Not some local hospital in Guatemala but by the Mayo Clinic, who is alive 32 years later. Never found a case like that. I have challenged doctors at conferences where I’ve lectured to match it and they haven’t been able to.

Dr. Nicholas Gonzalez: 32 years. In August of 1982 she was diagnosed with stage 4 pancreatic cancer and alive 32 years later. Technically I cannot say the tumors went away because she has refused to do scans for 32 years.

Ty Bollinger: She is alive.

Dr. Nicholas Gonzalez: She is alive. That’s all you need to know. You don’t need to know anything else. The average survival for stage 4 pancreatic cancer in those days and today is 3-4-5 months. Nobody lives beyond about 18 months with that kind of disease.

Ty Bollinger: Right. And this is 32 years.

Dr. Nicholas Gonzalez: 32 years later. If she had been a conventional patient and treated in a conventional institution, the American Cancer Society would have held a press conference and it would have been on the cover of Time Magazine.