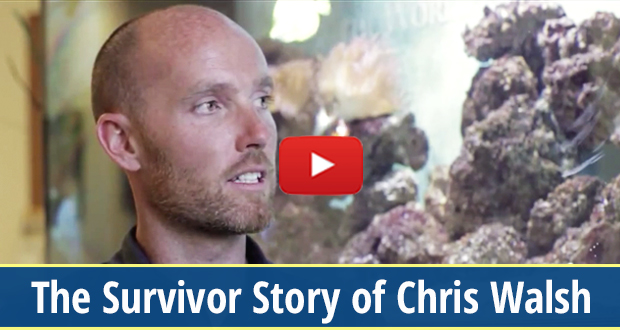 Ty Bollinger: So I’m here with Chris Walsh today. We’re at the Center for Advanced Medicine and Clinical Research. Dr. Rashid Buttar’s office in NC. Thanks for being here with us today Chris.

Chris Walsh: It’s good to be here. Thanks for having me.

Ty Bollinger: And we’re sitting here in front of the fish. So tell me about the fish. What do they remind you of?

Chris Walsh: It reminds me of being here 4 years ago when I started my treatment here. I used to stare at them when I was waiting in the waiting room, kind of lost, not knowing what my future was going to be. Kind of diving into a whole new world of alternative medicine and finding a way to health.

Ty Bollinger: So you were here for what reason? You were here because you had been diagnosed with what?

Chris Walsh: I had Clark’s Level IV Melanoma, which was supposedly the worst kind of melanoma in the deepest layer of the skin.

Chris Walsh: Yes, skin cancer. It was 4 years ago almost today I was diagnosed. And from what we found out it had, it was, it kind of made its tentacles inside of my leg. So they thought that I probably wouldn’t have a leg from here. And then obviously the conventional treatments would have made it worse. I wouldn’t have had a leg, and I would probably be dead now anyways.

So at that point I was really scrambling. So I went and just did as much research as I could. I went and found your book, Cancer Step Outside the Box, which really opened my eyes to a lot of things. I had no idea about any of this.

I went and bought Patrick Quillin’s book Beating Cancer with Nutrition. Started following that immediately. And I saw Dr. Buttar speak a seminar at his old office. And I didn’t know what he did, but I remember thinking that place seems really interesting.

So I called my buddy up, and I couldn’t remember his name, and he said, no, it’s Dr. Buttar. And I looked him up, and he just so happens to treat cancer. So I decided, I don’t like my options now. I already talk to supposedly the best guy in Cleveland, and that’s not what I was going to do.

So I called Dr. Buttar. I got a consultation. And within the first 15 minutes, I knew I was going to do it. I mean, I didn’t know anything about holistic or alternative medicine. And what he said to me just made so much sense.