Imagine your 17-year-old daughter gets the diagnosis of cancer. You both do research on treatment options and see that chemotherapy is toxic with potentially long standing, irreversible consequences: damage to the reproductive organs, bladder, heart,  lungs, nervous system, kidneys, and more. You and your daughter decide not to do it and choose to take a different route; one that is safer and is non-toxic.

Much to your shock, while you are out shopping, your daughter is home and the Connecticut Department of Children and Families (DCF) shows up at your door (with 12 police cars no less, to kidnap your daughter and force her to do chemotherapy against her will and your wishes).

What would you do?

Finally, revealed in The Truth About Cancer’s exclusive interview is the true story about Cassandra Callender (aka “Cassandra C.”) and her real life medical kidnapping and how she was forced to do chemotherapy against her will.

This is the first video interview that Cassandra has given, and The Truth About Cancer is honored to be able to share this exclusive interview with you.

Finally The Truth Revealed: The Medical Kidnapping of Cassandra C – The Truth About Cancer Exclusive Interview

You may remember the news coverage that back in September 2014, after having a portion of her lymph node removed for a biopsy to diagnose stage 3-4 Hodgkin’s lymphoma, Cassandra and her mother (Jackie Fortin) wanted a second opinion. This seemed like a reasonable request, especially in light of the fact that the prescribed treatment was going to be toxic chemotherapy, which, according to the Mayo Clinic, has long-term side effects including heart damage, lung damage, and fertility issues. But for that simple request, Cassandra soon became a target of “gunpoint medicine.”

Medical personnel told Cassandra and her mother that chemotherapy was her “only option” and without it, there was a 100 percent chance that she would die. Apparently, the oncologists at Connecticut Children’s Medical Center (CCMC) had never heard of a man named Billy Best, who was diagnosed with Hodgkin’s lymphoma in 1995 and ran away from his Massachusetts home after a couple of chemo treatments. His runaway from chemo made national TV news at the time. Eventually, Billy used Essiac Tea and 714X to treat his cancer, and is alive 20 years later, completely cancer free. He even published a book, The Billy Best Story: Beating Cancer with Alternative Medicine.

So, I guess maybe the 100 percent chance of death without chemo was an exaggeration (also known as a lie) intended to coerce Cassandra into submitting to chemo. But I digress. Back to our story…

Not wanting to undergo the horrific side effects of chemotherapy, in November of 2014, Cassandra ran away from home. However, after learning that her mother might be thrown in jail if she didn’t return, she came home. Then, in December of 2014, when she was alone in the house, Cassandra’s home was surrounded by a dozen of “Hartford’s finest” (police cars) and workers from the Connecticut Department of Children and Families (DCF). They banged on the doors and windows and terrorized the 17-year-old while she hid in a closet and cried.

Later that day, Cassandra was kidnapped by DCF workers and the police and was taken back to the hospital to begin chemotherapy. Amazingly, it took a dozen police cars surrounding her home to capture this “hardened criminal” named Cassandra (yes, sarcasm intended). I assume that there were no robberies or rapes that day in Hartford, as they had so many police cars available to surround the house. Or maybe there was a donut shop down the street…

Within a few days, Cassandra was back in the hospital and scheduled to begin forced chemotherapy. But even then she wasn’t ready to submit to this gunpoint medicine. It took no less than 12 workers to strap her wrists and ankles to the bed and control her while the nurse stuck a needle in her neck to sedate her. She woke up in the recovery room with a port in her chest. Had this horrific abuse taken place on the streets of Hartford, the assailants would have been guilty of assault and battery. However, since these human rights violations occurred in the hospital, the assailants will never be charged with the crimes that they committed against Cassandra. In her own words, “At that point, I didn’t feel like a human anymore… I feel like I’ve been violated… My ankles and wrists were bruised when I woke up.”

Over the course of the next 5 months, Cassandra received round after round of toxic chemotherapy; always letting the violators know that “I don’t consent to this treatment” before they forced deadly poison into her body. She was told that if she fought them, that they would starve her. Eventually she quit fighting. Oh yeah, I forgot to mention that she couldn’t leave her room (there was an armed guard at the door), she couldn’t make phone calls, and she couldn’t have guests in her room unless they were “approved.“ Cassandra wasn’t even allowed to go outside! In her own words, “even prisoners are allowed to go outside for an hour a day. I didn’t even get that.”

Whatever happened to the Hippocratic Oath: “First do no harm”? Ignorance and arrogance go hand-in-hand. Government officials on the payroll of Big Pharma. Oncologists prescribing toxic treatments that they themselves won’t take. Sadly, in the US, we aren’t just a police state and a fascist oligarchy, we are actually a medical tyranny, as is evidence by this horrific story of gunpoint medicine and “medical rape” being forced on an innocent 17-year-old whose only “crime” was asking for a second opinion.

It’s legal for a 12-year-old to get birth control and have an abortion without the consent or knowledge of her parents in most states. But a 17-year-old isn’t allowed to reject poison (chemotherapy) and is held as a prisoner, strapped to her hospital bed, injected with poison (medically raped), isolated from her family and friends, confined to her room, with an armed guard at the door. Did I miss anything? Oh yes, this treatment is “legal” and “approved”!!! If the US military did that to Guantanamo captives, what would folks think of that? 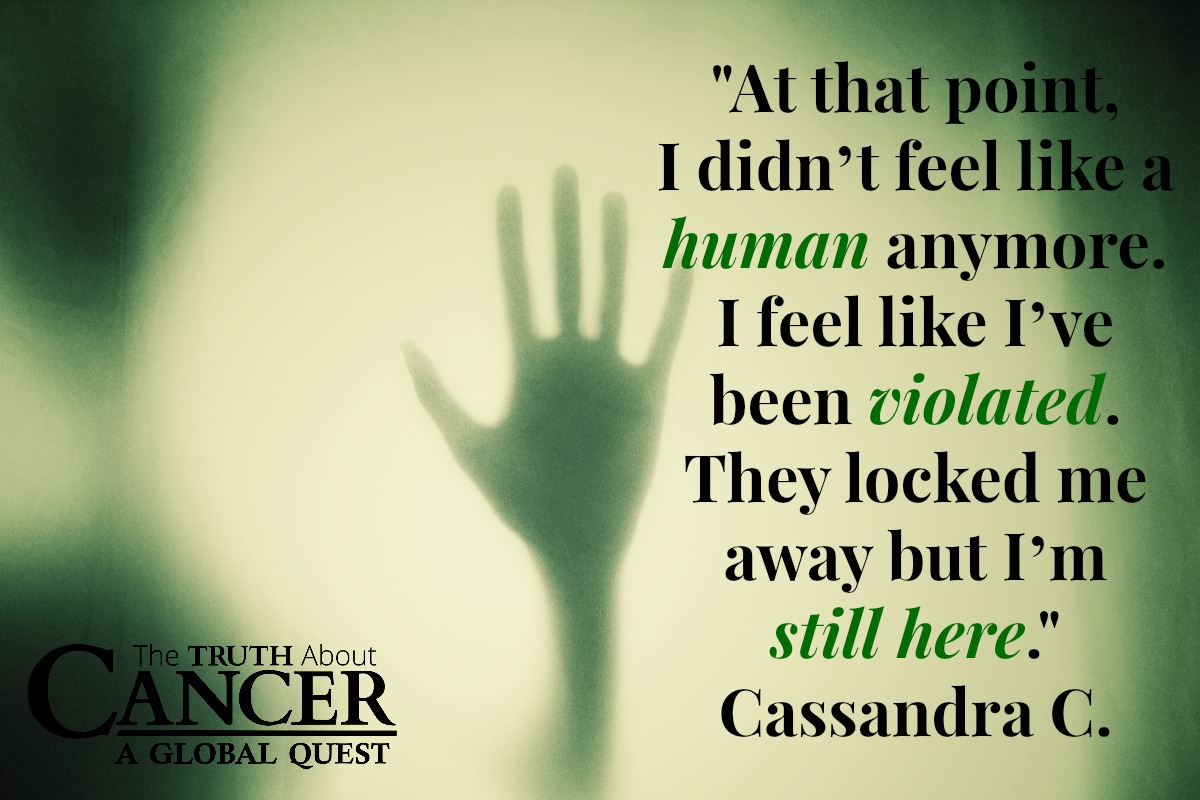 Bottom line… this won’t end with cancer treatments and we all know it.

We’re just getting started on this slippery slope to complete medical tyranny. Can you imagine what they’ll use these court decisions to justify making compulsory in the future? We are already seeing “forced vaccination” in California with the recent passage of SB 277, despite the fact that vaccines have been linked to autism and cancer.

America has already had the most aggressive vaccine schedule of any nation on the planet and has the highest rate of infant death. States are already in the process of making it harder for parents to opt out of vaccinations, as the number of “required” vaccines continues to grow. Where will this madness end?

Founding father Benjamin Rush warned over 200 years ago that medical freedom should have been added to the Constitution:

But they didn’t… and now here we are.

You’ll never see a news report stating that a conventional treatment (such as chemo) killed a cancer patient. It’s always “the cancer won after a valiant fight.” But somehow, after all the years and trillions of dollars spent on the war on cancer, cancer keeps winning out while the cancer industry keeps profiting with treatments that don’t really work.

That’s why The Truth About Cancer is vigilant in our fight to educate about real cancer treatments, to expose the lies, and to eradicate this disease once and for all. We all need to stand up and fight for our medical freedom just like Cassandra did. In her own words, “I made it through it. I wouldn’t let them break me. They locked me away but I’m still here.”