You are here: Home / Cancer Causes / The TRUTH about CHEMO 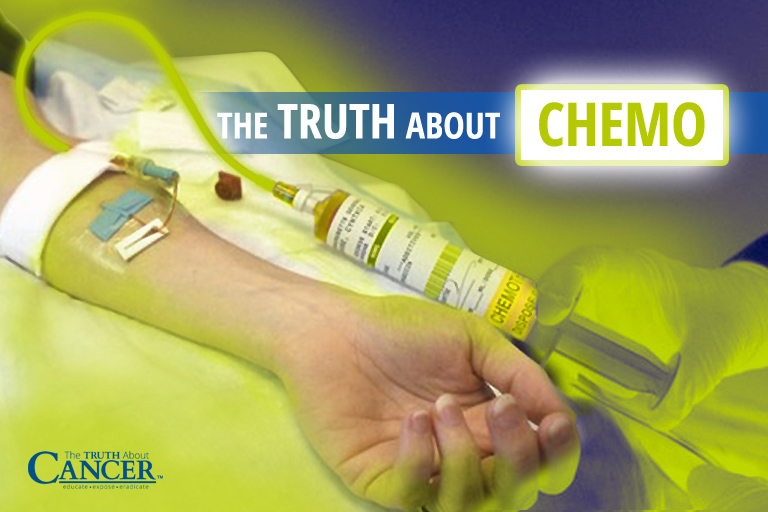 Treating cancer is BIG business! In fact, each year in the USA alone, allopathic (conventional) treatments generate over $200 billion!

Big Pharma, physicians, and others involved in the “Cancer Industry” profit heavily each time a cancer patient submits to the conventional “Big 3” treatment model:

…or perhaps a barbaric combination of the three… hence the slang “cut, poison, burn.”

In this article, we’re going to focus solely on chemotherapy (chemo).

Chemotherapy was discovered during World War II when a ship carrying sulfur mustards (a nerve agent to be used in chemical warfare) was bombed and the troops on board were exposed to the chemical.

The first versions of chemotherapy drugs were called “nitrogen mustards.” In 1942, Memorial Sloan-Kettering Cancer Center secretly began treating breast cancer with these nitrogen mustards. No one was cured.

Gradually, synthetic versions of the nitrogen mustards were developed, but they all had one common trait… they are unable to differentiate between “healthy” cells and “cancerous” cells and they kill everything.

All the healthy cells (bone marrow, immune cells) that are naturally fast dividing are mowed down as surely as the fast-dividing cancer cells.

As an analogy, suppose you were to tell an exterminator that you have a termite infestation in your home. The exterminator is a professional whose advice you trust. Image he tells you that the best course of action would be to use a chemical which is known to eat away at both the wood and foundation of homes, as well as cause irreparable damage to furniture and windows. Would you still go ahead with it? 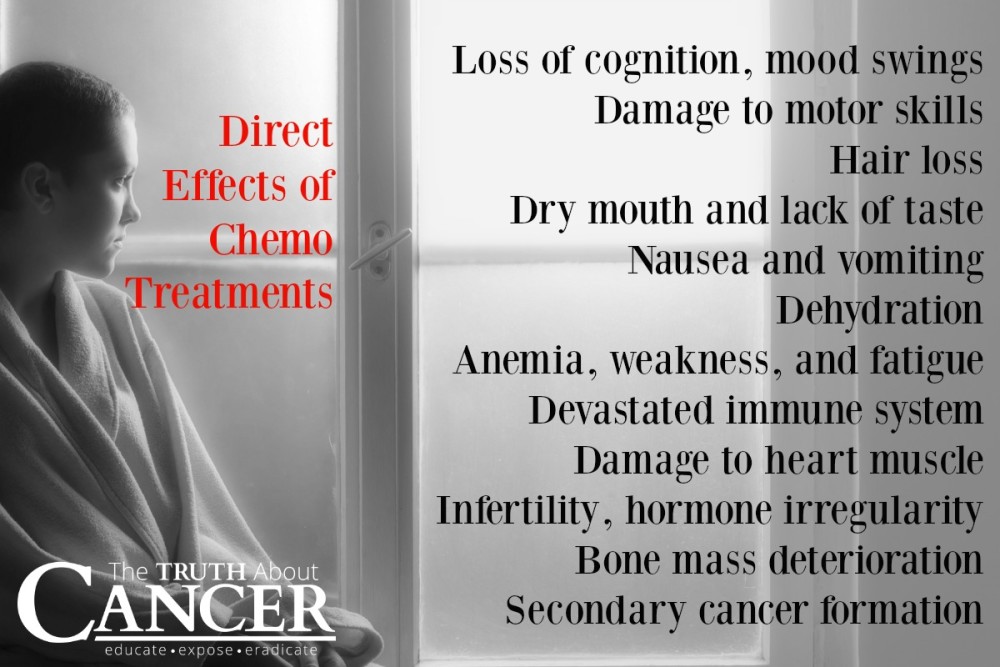 Common Side Effects of Chemotherapy

The repercussions of chemotherapy on the human body are intense. Some people call them “side effects,” but the truth is they’re “direct effects.”

Cognition is affected during chemotherapy. Many patients who have undergone this modality refer to it as “chemo brain” – difficulty with memory, basic thought processes, coordination, and mood.

Peripheral neuropathy is tingling in the extremities and may be accompanied by general fatigue or weakness, shakiness, numbness, or pain. These symptoms also affect basic balance, reflexes, and coordination.

Xerostomia is extremely dry mouth and can lead to sores in the soft tissues, difficulty swallowing, and make you more prone to bleeding. Patients report that taste is also affected.

Nausea is one of the most common direct effects of chemotherapy.

Dehydration as a result of vomiting or diarrhea is a concern and drinking plenty of water is critical during chemotherapy treatment. Adequate hydration may ease symptoms of xerostomia and protect your kidneys (working hard to flush the chemo toxins from your body) as well.

Anemia occurs when your body can’t make enough red blood cells. Red blood cells carry the oxygen to your tissues and lack of necessary oxygen results in fatigue, dizziness, inability to concentrate, feelings of being cold, and overall weakness.

Neutropenia is what happens when your body doesn’t have enough white blood cells – the backbone of your immune system. This leaves you more susceptible to infection and reduces their ability to fight the residual cancer.

Thrombocytopenia is caused by a low platelet count. You need platelets for blood clotting and not enough means you are more likely to bruise or bleed. This can cause issues with your menstruation, cause bleeding in your digestive tract that manifests in vomit or stools, and cause you to have nosebleeds.

Cardiomyopathy is a weakening of the heart muscle. This may cause irregular heartbeat (arrhythmia) which can increase your risk of a heart event.

Alopecia will affect all the hair on your body and usually occurs quickly when this treatment is begun. Within several weeks after the conclusion of chemotherapy the hair begins to grow back. Fingernails and toenails may change as well, either turning colors or becoming very brittle.

Infertility in both men and women can occur with chemotherapy, affecting hormones and sperm count. It may also wreak havoc on menstrual cycles, impact overall sex drive, and cause extreme vaginal dryness. Sometimes it even triggers the onset of menopause.

Osteoporosis is the loss of bone mass. As you age, this is a natural occurrence (women are most at risk). Chemotherapy speeds up the process by lowering estrogen levels rapidly and weakening bone marrow.

As you can see, the impact of chemotherapy on the body can be brutal. It lays waste to your immune system, which is your first line of defense against cancer. 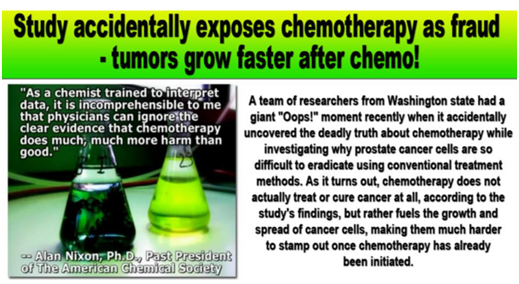 As a result, another direct effect of chemotherapy is… ironically… cancer. Yeah, it’s printed right on the chemo drug warning labels (in small print, of course). For instance, Doxorubicin may increase your risk for developing leukemia (cancer of the white blood cells), especially when it is combined with other chemotherapy drugs and radiation. Cyclophosphamide increases the risk of bladder cancer and ovarian cancer. And the list goes on and on…

If you go into a cancer treatment clinic with one type of cancer, and you allow yourself to be injected with chemotherapy, frequently a second type of cancer develops as a result. Your oncologist will often claim to have “successfully” treated your first cancer even while you develop a second or third cancer directly caused by the chemo used to treat the original cancer. 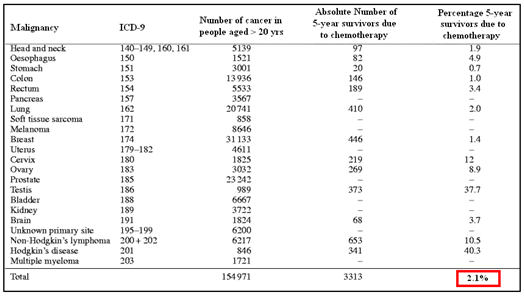 According to a study conducted by the Department of Radiation Oncology at Northern Sydney Cancer Centre and published in the December 2004 issue of Clinical Oncology, the actual impact of chemotherapy on a 5-year survival in American adults is a paltry 2.1%. (See the chart below.)

Sadly, the truth is that many people who “die from cancer” really die from the conventional treatments long before they would have actually died from the cancer itself. To put it plainly, the treatment kills them before the cancer kills them. As a matter of fact, the chemotherapy drug 5-fluorouracil (5-FU) is sometimes referred to by doctors as “5 feet under” because of its deadly side effects. Not to mention that a team of researchers at the University of Rochester Medical Center (URMC) and Harvard Medical 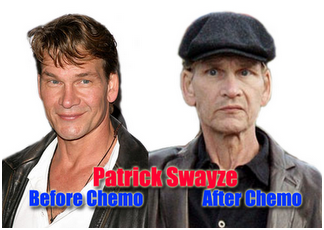 School have linked 5-FU to a progressing collapse of populations of stem cells and their progeny in the central nervous system.

For most adult cancers, the typical best case scenario is that the “Big 3” buys a little time. In a worst case scenario, you will die from the treatment rather than the disease.

There are solutions to treating cancer naturally that involve more than just doing nothing. Here at The Truth About Cancer, we are dedicated to bringing you the latest and most up-to-date information about natural, non-toxic treatments for cancer. Herbal remedies, B-17, hyperthermia, hemp, bio-oxidative therapies, frequency machines, and detoxification are just a few non-toxic treatments that are being successfully used by thousands of people across the globe to treat their cancer.