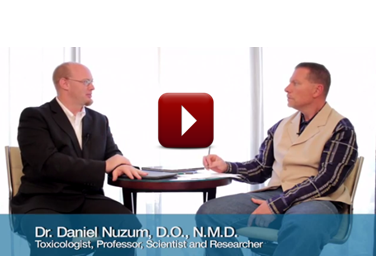 Ty Bollinger: What if your soda was giving you cancer? Have you ever heard of aspartame? I wanted to get the opinion of Dr. Daniel Nuzum. And while I was in California, I was able to sit down with him and get his opinion about aspartame that’s in most diet sodas and its effect on our health.

Dr. Daniel Nuzum: Google “aspartame” and look up all the different names for aspartame. It comes under quite a few different names, and not just an artificial sweetener. It has other chemical names.

And in the labeling process, they’ll label it under different things. So it doesn’t always say aspartame.

Ty Bollinger: But is it toxic to us?

Dr. Daniel Nuzum: It is very toxic. I always joke with my students that it’s a preservative, because it breaks down into formaldehyde. That’s what they preserve dead bodies with. It’s not an anti-oxidant though.

Ty Bollinger: What is the chemical make-up of aspartame? So you said it breaks down into formaldehyde.

Dr. Daniel Nuzum: As aspartame is metabolized, it ends up as formaldehyde, and formaldehyde is a toxic chemical itself. It’s cancer-causing. It’s a corrosive chemical.

Ty Bollinger: Wow! So we’re eating something that is potentially…

Dr. Daniel Nuzum: Agent. Exactly. Now, the symptoms of neurotoxicity due to aspartame are identical to the symptoms of MS, multiple sclerosis, identical. It can give you the exact same symptomology. And I’ve had, I can’t tell you how many patients that we’ve pulled off of aspartame, off of all artificial sweeteners of any kind, and their diagnosis for MS had just disappeared.

Ty Bollinger: Well, I’ve read in the literature about the initial days of aspartame in the last ‘60s, early ‘70s with GT Searle. And apparently they found it was eating holes in the brains of the monkeys.

Dr. Daniel Nuzum: Exactly. It’s a neurotoxin, and it’s corrosive. It does. In essence what salt does to a car body; it eats holes in it.

Ty Bollinger: We saw that. We were up in Detroit recently interviewing Dr. David Brownstein. We drove up next to a car, and one of our camera guys, Travis, was it you or Allen? I think it was Allen. Allen said, “look at that car.” And the whole, it was all just rotted out. Because they salt the roads up here.

So aspartame does the same thing.

Dr. Daniel Nuzum: Does the exact same thing. Does what salt would do to the body of a car, only it does it to your brain and your spinal cord.

←
Previous
Is Your Gut Helping You Prevent Breast Cancer?
→
Next
The TRUTH about CHEMO