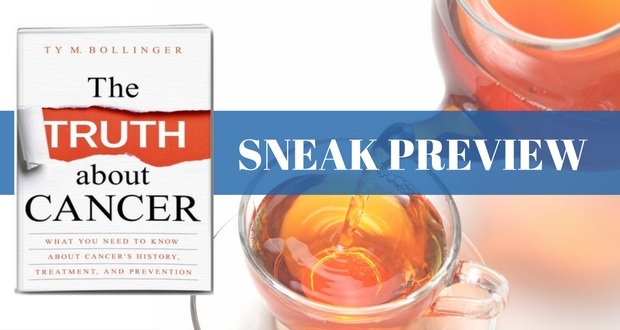 In 1988 my late grandmother, Helen Cade, or “Mama Helen” as we affectionately called her, was first diagnosed with terminal cancer. I’ll never forget helping this God-fearing woman prepare a special herbal concoction in her kitchen that she would take several times daily as treatment for her cancer, and that helped her live for years beyond what the doctors
said she would.

Mama Helen must have heard through the grapevine about this particular herbal remedy, which was popularized back in 1922 by a Canadian nurse, Rene Caisse, who learned about it from one of her patients.

The patient, who had previously been diagnosed with breast cancer, explained to her that an Indian medicine man had offered up the remedy as a cure for cancer. Hearing this, Nurse Caisse decided to test it on her aunt, who had been diagnosed with terminal stomach cancer and told she only had six months to live. The tea worked like a charm:

I can tell you plainly that Essiac tea contains just four simple ingredients. But before I list them, you should know that the preparation instructions are just as important as the formula itself. Unlike traditional tea infusions, Essiac Tea is a decoction, meaning it involves extracting the essence of the roots, bark, and seeds of plant material, which includes things like mineral salts, bitter principles, and other “hard” materials that require boiling and extensive steeping to extract. 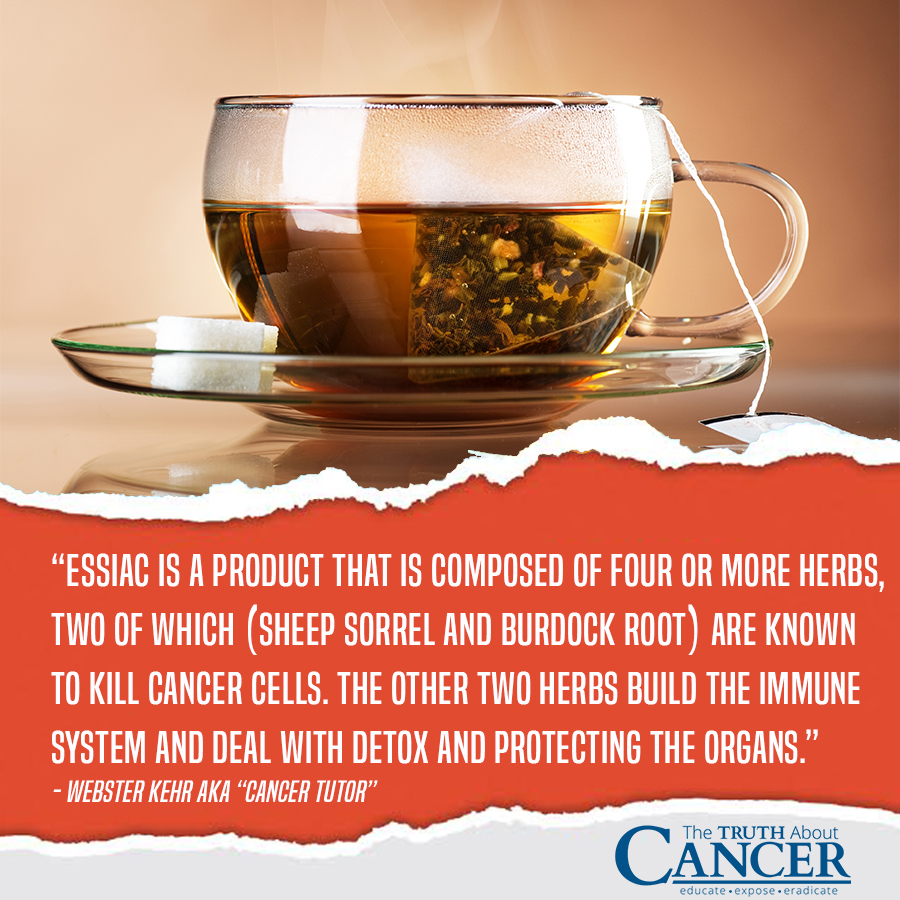 A decoction differs from an infusion or extract, which pulls vitamins and volatile oils from soft plant material like leaves and flowers. Both decoctions and infusions have their proper place in medicine, but it’s important to understand when trying to make Essiac tea that the preparation is a decoction. Now for the good stuff: here’s precisely what Essiac tea contains and how to prepare it:

Burdock root has been used for many centuries and by many people as a blood-purifying herb to neutralize and eliminate poisons from the body.162 Studies have demonstrated definitive antitumor activity in burdock root, and Japanese scientists have isolated a certain antimutation property in the plant that they refer to as “B factor.” The World Health Organization also recognized burdock root as being effective in the treatment of human immunodeficiency virus, or HIV.

Sheep sorrel is the “mystery weed”; a retired doctor once told Nurse Caisse if everyone used it, it would result in “little or no cancer in the world.” Sheep sorrel is the primary tumor-dissolving herb in Essiac tea, and it contains a unique substance known as aloe emodin that fights leukemia. Sheep Sorrel is also densely packed with a range of powerful antioxidants, or as Jon Barron of the Baseline of Health Foundation puts it, “one of the most potent antioxidant herbs known.164 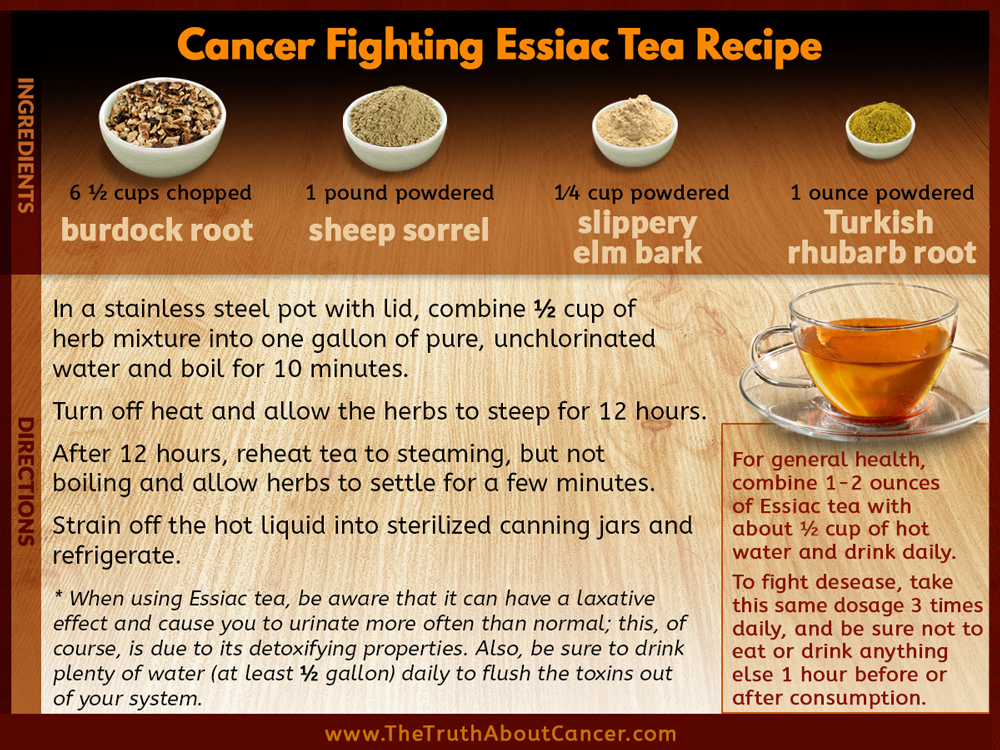 How to Properly Prepare Essiac Tea

In a stainless steel pot with lid, combine 1/2 cup of the herb mixture* into one gallon of pure, unchlorinated water and boil for 10 minutes. Turn off the heat and allow the herbs to steep for 12 hours. After 12 hours, reheat the tea to steaming, but not boiling, and allow the herbs to settle for a few minutes. Strain off the hot liquid into sterilized canning jars—you can save the leftover pulp and use it for healing poultices. Refrigerate the tea. For long-term storage, use the boiling water bath canning method and store the tea in cool, dark, dry place. For preventative purposes, combine one to two ounces of Essiac tea with about 1/2 cup of hot water and drink daily. Be sure to drink plenty of water (at least 1/2 gallon) daily to flush the toxins out of your system.

If you already have cancer, take this same dosage three times daily, and be sure not to eat or drink anything else one hour before or after the treatment. Essiac tea is compatible with most other alternative cancer treatments except for Protocel. My advice if you decide to make and start using Essiac tea is to pick up a copy of The Essiac Book by Mali Klein and read it in conjunction with the treatment.

*This recipe will produce 8 to 10 cups of dry herbs, which is enough to produce 16 to 20 gallons of drinkable Essiac tea. The best way to preserve extra dry mixture for later use is to put it into an airtight glass container and store it in a cool, dark place. Since the dry herb mixture is light sensitive (as is the brewed tea itself), keeping it out of direct light or in an ultraviolet-protected brown glass jar is your best option. When using Essiac tea, also be aware that it can have a laxative effect and cause you to urinate more often than normal; this, of course, is due to its detoxifying properties. Some people report developing headaches, swollen glands, skin redness and inflammation, and flu-like systems, all of which are normal parts of the detoxification process.