You are here: Home / Cancer Prevention / The Benefits of Salt & the Best Salt to Use (video) 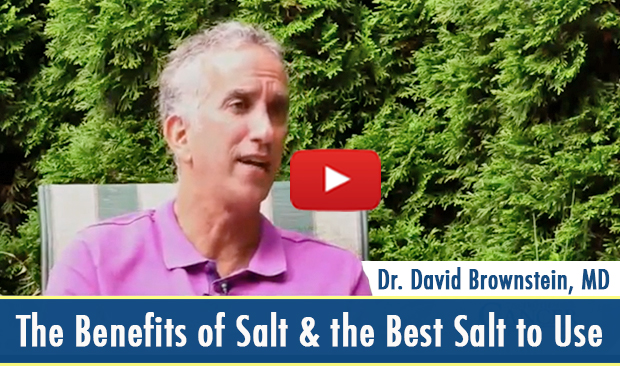 Video Transcript: The Benefits of Salt & the Best Salt to Use

Dr. David Brownstein: Our bodies need and require adequate amounts of salt daily. Salt is the second major constituent next to water in our body. The immune system can’t function well without salt. Our hormonal system can’t function well without salt, and iodine can’t work in the body without adequate amounts of salt. So, I consider salt one of the basics. I check salt levels in every patient that comes in the door. I can tell you the vast majority are salt deficient. As I write about in my book, Salt Your Way to Health, there is good and bad salt.

I would say an inadequate form of salt is refined salt. It’s the little white crystals that we’re all used to. They fit in a salt shaker and they’re real fine and they contain a little bit of iodine. But they only contain sodium and chloride, a little bit of iodine, and then toxic chemicals such a ferricyanide and they have some bleach chemicals in them to make it white. That’s not a good product.

A better product is unrefined salt, which has over 80 minerals in it, lesser amounts of sodium and chloride. It doesn’t have a lot of iodine in it, so therefore you need to supplement with iodine.

Ty: Okay. So many diets that I’ve heard about, people that think they’re getting healthy, they say, “Okay, I’m not eating any more salt.” Not a good idea?

Dr. David Brownstein: Not only is it not a good idea, it’s a disastrous idea. Eventually the adrenals get overstressed from this and don’t function well. It’s not good for the immune system and it’s not good for fighting cancer. People need salt in their diet. It’s a staple. Human beings have needed salt since the beginning of time. We were designed by our maker to need salt.

How much salt? About a teaspoon a day for most people. The latest studies that just came out, New England Journal of Medicine, verified what I’ve been saying for the last 15 years. You know, I blog about this and I write about it in my newsletter as those studies came out. You can look at the curves [study results]. It’s very easy to look at them and you see high mortality rate at the low end of salt intake, and then it goes down.

It doesn’t really matter how much salt you use. Maybe at very high rates there’s problems, but people aren’t going to eat that amount of salt. They just need the right kind of salt, which is unrefined salt such as Celtic brand Sea Salt, Redmond’s Real Salt, the Himalayan salt. I’ve tested all three versions of those four times. I didn’t find toxic agents and I found adequate amounts of minerals in all of those kinds. I think those are very healthy forms of salt.

Ty Bollinger: Awesome. That’s good to know, too, because one of those − the Himalayan sea salt’s what we use. Good to know that we’re doing the right thing, at least in this area.

←
Previous
The Highway Of Life: Your Digestive Tract
→
Next
How Exercise can Prevent Cancer