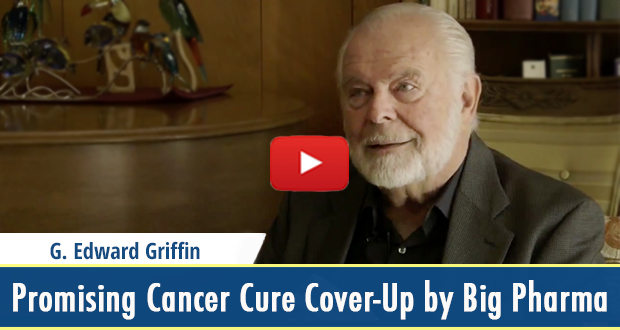 G. Edward Griffin: It is and it’s a clear example of the degree to which, I guess there’s no other word… but fraud. The degree to which fraud; deliberate, conscious fraud can be injected into what we would normally think is a scientific process.

Early in the days of the development of laetrile [amygdalin or vitamin B17] there were stories circulating that people were getting well. They were being treated and they were coming back from the edge of the grave and so forth. So naturally the pharmaceutical industry wanted to put an end to this and so they set up a deal where they wanted to have it tested. The idea is “okay, none of this discussion about people getting saved, none of these little stories. Let’s do a scientific test.”

Everybody was in favor of that except they insisted that only those who were opponents of laetrile do the tests and nobody else could do the tests, you see. It had to be the oncologists and the people on the staff of the pharmaceutical industry and so forth. To make a long story short, and it is a long story, the California branch of the AMA − California Medical Association − was given the task of doing a test on laetrile.

So anyway they all had kind of a vested interest in NOT finding something that would interfere with their businesses you see. So there was sort of a bias built in. Anyway, they did this very fine scientific study using mice and so forth. They spent a lot of money and they produced the report, and McFarland and Garland announced that there was no evidence whatsoever that laetrile had any effect whatsoever in the control of cancer. So that was all anybody needed to hear. There was something done by the California Medical Association and two fine upstanding doctors.

Well these doctors, just to give you an idea of how fine and scientifically astute they were, these were the guys… both of them said that there was no connection at all between cigarette smoking and lung cancer.

G. Edward Griffin: Same doctors, yeah. Before they got involved in this report. They had already been bought and paid for by the tobacco industry, of course. In fact, I think it was McFarland that even made this fantastic quote, “a pack a day keeps cancer away.”

Ty Bollinger: I’ve seen the newspaper ads that they used to run that had that exact quote. That was from him?

G. Edward Griffin: That was from him. He was one of the guys. Incidentally, he died in bed some years later in a fire started by his cigarette in bed.

G. Edward Griffin: Burned him up. I mean I’m sorry to see anybody die, especially from fire, but I thought it was a certain irony to that.

G. Edward Griffin: Poetic justice or something. And the other guy died of cancer of the lung. They were both heavy smokers. So anyway that gives you a little idea of the scientific expertise of these guys. Well, as far as most doctors are concerned, if they see a report from the California Medical Association and it’s accepted by the teaching institutions, there’s no question that that is science. That’s authentic.

G. Edward Griffin: That is gospel truth. Well, it was accepted as gospel truth for quite awhile and then we got hold of a copy of the full report. I’ve forgotten how we did it, but we did, and it was a big, thick report. All anybody ever read was that cover page where McDonald and Farland, no McFarland and Garland. I’ll get it straight. Sounds like a comedy routine.

G. Edward Griffin: Who’s on first, yeah. Anyway, all anybody ever saw was that little summary that they wrote. And it turns out that these guys never used laetrile themselves. They were just sort of analyzing the laboratory results of the study and this was their summary. Well, when you go back and read the actual pages of the report, the summary was a lie. An absolute lie.

Ty Bollinger: Kind of like the Cliff notes being incorrect.

G. Edward Griffin: Nobody ever went back to look at, there was plenty of evidence in the laboratory work that it did retard the growth of cancer. In spite of the fact that there was a high question about the quality of the laetrile they were using. In fact, it was pretty obvious that they did not have a good quality laetrile. It was also obvious they were using lower dosages than was being used in the clinics. And in spite of those two handicaps, the laboratory results were reporting case after case after case where these mice were recovering from cancer. Right in the body of the report and yet the summary was “there was absolutely no evidence that…” you know, etcetera, etcetera. This was sort of the flagship of what had been repeated many times since then. Sloan Kettering report did pretty much the same thing.

It goes on and on and on and once people realize that not only is there just ineptitude or bias in the cancer industry. Bias against natural therapies, but also deliberate fraud. Now we’re dealing with a different animal. Because when you consider the number of people who die from cancer, this amounts to genocide.

←
Previous
7 Essential Steps for Preventing Breast Cancer (video)
→
Next
What is Fulvic Acid?