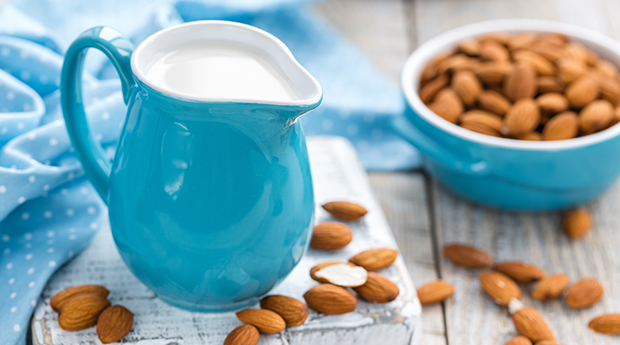 Do you drink coconut or almond milk? Most health conscious consumers have found these products to be significantly healthier than traditional milk and pasteurized dairy products. Unfortunately, there may be a cancer-causing ingredient lurking in these popular nut milks.

There are so many food products that market themselves as “healthy alternatives.” Many shoppers just buy the claim and don’t investigate the actual ingredients. Some of these products are great, but others contain questionable additives. If you search your refrigerator and cupboards you may be astonished at how many food sources contain the additive carrageenan.

Carrageenan, surprisingly, is found in many organic products that most believe to be very healthy and are often touted by health professionals. Should you be concerned about carrageenan in your food?

Carrageenan is used as a food additive thickening emulsifier to improve the texture and consistency of foods. It does not add flavor or increase shelf life.1 It is most commonly found in boxed milks, yogurts, and ice creams.

Which foods in your kitchen contain this additive? The following is a list of food sources that commonly contain carrageenan:1,2,3,4

There are many healthy foods in these categories that do not contain carrageenan or any other major additives. Read your labels and be sure to look for these!

Carrageenan is a glucose related sugar called a sulfate polygalactan from red seaweed and algae. Its name is derived from an Irish coastal region named “Carragheen,” where the original harvesting of the seaweed began.

Carrageenan is derived from red seaweed and processed with chemicals (potassium hydroxide) to remove the cellulose and neutralize its acidity. Despite the chemical processing it is considered a natural food additive.1 Carrageenan was first introduced to the food industry in the 1930s and works so well at thickening and improving the texture and solubility of products that it has drawn widespread appeal.4,5

This degraded form is called poligeenan and is not used in the food industry. However, it is known that when stable carrageenan is exposed to strong acids (such as stomach acid) the sulfur component becomes unstable and reactive.5

Unfortunately, the U.S. Food and Drug Administration (FDA) has not done its due diligence in testing the reactivity of carrageenan. They have listed the substance as generally recognized as safe (GRAS) since 1973 with very little safety testing.6

Once we drink our favorite nut milk beverage with carrageenan, the thickening agent gets degraded by the stomach acid and bacterial fermentation in the gut which alters the structure of the compound.7 Heating the coconut or almond milk would also degrade the compound and make it potentially toxic.

Let’s say you get an organic pizza with this ingredient in the sauce portion. You heat the pizza up and it begins to break down the carrageenan particle. Then you begin to digest the pizza and the chewing process provides mechanical insult to the agent that further degrades it. The additive is then exposed to harsh stomach acid as the body is working to metabolize and absorb the nutrients within the pizza. This same process occurs with your nut milk.

Finally, the pizza or nut milk gets into your small and large intestine where it is exposed to bacteria that further metabolize it, releasing the carrageenan in its most degraded form into the blood stream. By this time, we must expect the carrageenan to represent a similar degraded form that scientists use in order to create inflammation in lab animals.1,2

Dr. Joanne Tobacman, MD, is a physician-scientist who has studied the carcinogenic effects of carrageenan for over 2o years. She found that the carrageenan was stable and safe while in the food product itself, but would too easily break down in the digestive process and cause health problems. Her research linked carrageenan consumption to the development of diabetes and digestive problems.4

Dr. Tobacman also found that carrageenan could contribute to the development of ulcers and cancerous tissue growth. The International Agency for Research on Cancer reported in 1982 that there was enough evidence to claim that carrageenan is a likely carcinogen in humans.5

A study dated back to 1981 cautioned researchers to investigate carrageenan consumption in humans before widespread usage. This study used strong language and cited multiple sources showing that carrageenan has carcinogenic effects when added to food or drinking water of several animal species.8

Carrageenan and Your Intestinal Microflora

Some of the symptoms associated with altered gut microflora are similar to those found in studies associated with the use of carrageenan. This includes irritable bowel syndrome, colon polyps, ulcers, and abnormal tissue growths. Studies even propose that the body exhibits the same response to carrageenan as it does to a bacterial infection from Salmonella and its development of disease.1

The Bottom Line on Carrageenan in Food Products

If you are looking to stay as healthy as possible and cancer-free, it is best to avoid food products containing carrageenan. Be sure to read labels and if your favorite foods contain carrageenan, look for the best alternative.

There are many brands that are working to remove this ingredient due to consumer demand. If your favorite foods have carrageenan then write the manufacturer and/or call their customer service number and ask them to remove it as soon as possible.

Lastly, nut milks can easily be made at home by high speed blending your favorite raw nut in a one to three ratio with clean water (eg. using three cups water and one cup of nuts), and then straining the liquid with either a cheesecloth or strainer. You can add vanilla, cinnamon, a little raw honey or stevia to give it flavor, and then store in your refrigerator in a glass jar for a few days. You can also find step-by-step directions for making almond milk here.

Please help bring more awareness about the dangers of carrageenan in almond and other nut milks as well as other foods by sharing this article with your friends and family below.

←
Previous
What Wheatgrass, Chlorophyll & Sunlight Can Do for the Body (video)
→
Next
Foods That Cause Inflammation: The Truth About Inflammation & Cancer (Part 2)