You are here: Home / Cancer Prevention / Apricot Kernels for Cancer: The Real Story of Laetrile 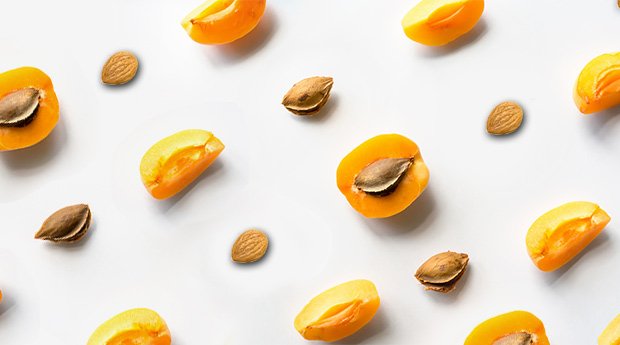 You may have heard about “laetrile” and how it can potentially help heal cancer, including breast cancer. Laetrile is the commercial label for apricot kernels (it also goes by name amygdalin or vitamin B17). You may have also heard about some possible dangers as well.

Unfortunately, “vitamin B17” is yet another natural substance that has fallen victim to misinformation and bad press. The truth is, apricot kernels have been consumed for their nutritional and healing properties for hundreds, perhaps thousands, of years, especially in the cool, arid areas where apricot trees naturally grow.

What the Hunzas Knew About Apricot Kernels

In the 1930s, Major Sir Robert McCarrison wrote about a tribe called the Hunzas who lived in the remote countryside near Northern Pakistan. He encountered this hardy community while he was working with the Indian Medical Service. According McCarrison’s written observations, the Hunzas seemed to enjoyed near-perfect health. Some lived to be over 135 years old and no one in their clan had any of the conditions so common in the modern world, such as diabetes, obesity, heart attack, and cancer.

What became clear to Krebs was that the Hunzas’ vitality had a lot to do with their overall lifestyle and diet. Their diet consisted of raw milk, the occasional meat and bone broth, fresh grains and veggies. They ate little sugar and, as nomads and herders, they naturally got plenty of exercise. The other characteristic that was unique about the Hunzas is that they ate massive quantities of apricot seed kernels.

Intrigued, Krebs continued his research until he found what he thought was the secret weapon inside the humble apricot kernel when it came to tumor eradication – the glycoside amygdalin.

Amygdalin is a powerful phytonutrient that is found in apricot kernels, along with many other seed-bearing natural foods (estimates range from 1,200 to 1,500 foods). It is found in the highest concentrations and with the most effective accompanying enzymes in apricot seed kernels. Amygdalin is a nitriloside and its structure most resembles that of a B complex vitamin, so Krebs named it “B17.” Not surprisingly, amygdalin is largely missing from the Standard American Diet.

The substance laetrile was created by Dr. Krebs as a concentrate of amygdalin and is created by extracting it from apricot kernels. 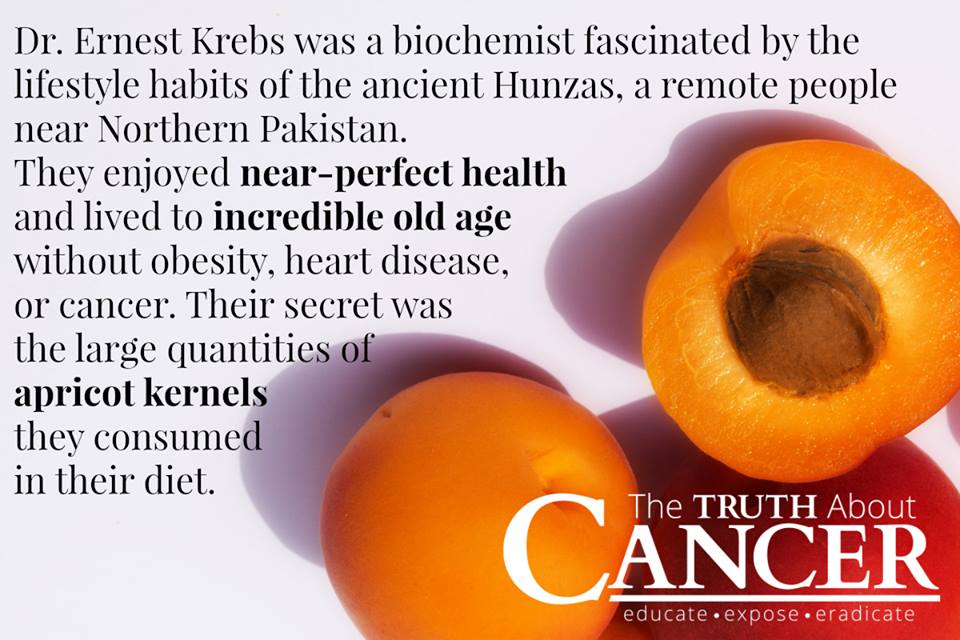 Compounds in Apricot Kernels That Make Them Cancer Killers

Amygdalin found in apricot kernels and in laetrile contains benzaldehyde and cyanide, two potent compounds against cancer. You heard that right! Cyanide is actually one of the substances that makes apricot kernels a potentially effective modality for cancer.

Unfortunately, the presence of cyanide in Laetrile was also the excuse the FDA used to ban it in the US in 1971. Prior to this time, laetrile was readily obtainable in the United States.

In fact, scandal surrounds the reasons why laetrile is still banned in this country, and discerning eyes point to the deep pockets of Big Pharma and its bought-and-paid for partner research institutions. In the mid-70s, investigative journalist G. Edward Griffin did in-depth research into the circumstances surrounding around the FDA ban. What he discovered was shocking. He uncovered documents buried by Sloane-Kettering Cancer Institute which proved that laetrile was “highly effective” against cancer.

The fact is that many healthy foods such as bitter almonds, millet, sprouts, lima beans, spinach, bamboo shoots, and even apple seeds have quantities of cyanide in them, yet they are still safe to eat. This is because the cyanide remains “locked” within the substance in these plants. The cyanide is harmless when bound within other molecular formations. In addition, the body has its own safety mechanism in the form of the rhodanese enzyme, whose job is to “catch” any free cyanide molecules that may have escaped and render them harmless.

It seems that nature has created the perfect cancer-targeting mechanism in amygdalin − and science as well as antecdotal evidence since the mid-1850s has proven this. It also seems a little odd that the National Cancer Institute itself decided to conduct human clinical trials with laetrile in the early 1980s, suggesting a precedent of at least some prior scientific evidence as to the cytotoxic (i.e. cancer-targeting) effects of the substance.

And very recent research is beginning to coming out that again sheds light on the anti-tumor effects of cyanide in the specific form that it presents itself within naturally-occurring substances. This new research includes a 2017 Bulgarian study that found evidence of “higher cytotoxic effect” for amygdalin in fast-developing tumors.

Yet still, conventional medicine sticks to its same old rhetoric when it comes to B17/laetrile/amagdylin. According to the National Health Institutes (NHI) webpage on laetrile/amagdylin, which was revamped in March of 2017:

In addition, they state that:

The side effects associated with laetrile toxicity mirror the symptoms of cyanide poisoning, including liver damage, difficulty walking (caused by damaged nerves), fever, coma, and death.

Yet on that same page, they also acknowledge that “Laetrile was first used as a cancer treatment in Russia in 1845, and in the United States in the 1920s.” Confused yet?

These days apricot kernels are the easiest way to ingest amygdalin since laetrile is still banned by the FDA in the US. The good news is that these kernels are easy to obtain at health food stores or online and are also fairly inexpensive. In addition, clinics still exist outside of the US where B17 or laetrile therapy continues to be administered. Laetrile is often used in addition to other therapies such as sodium bicarbonate (baking soda).

If you feel that B17 therapy may be something you would like to investigate further, be sure to get the facts about dosage and possible side effects. Talk to your integrated medical practitioner about your particular situation and whether amagdylin obtained from apricot kernels (or laetrile therapy if you reside outside of the United States) is right for you.

While the mystery may remain as to the main cause for the Hunza’s amazing vitality, one thing is for certain: their simple and stress-free way of eating, working, interacting, and moving their bodies have made them examples of the health that YOU are capable of having when you take proactive steps to heal your body naturally.

Please help bring more awareness about apricot kernels and cancer fighting laetrile by sharing this article with your friends and family. 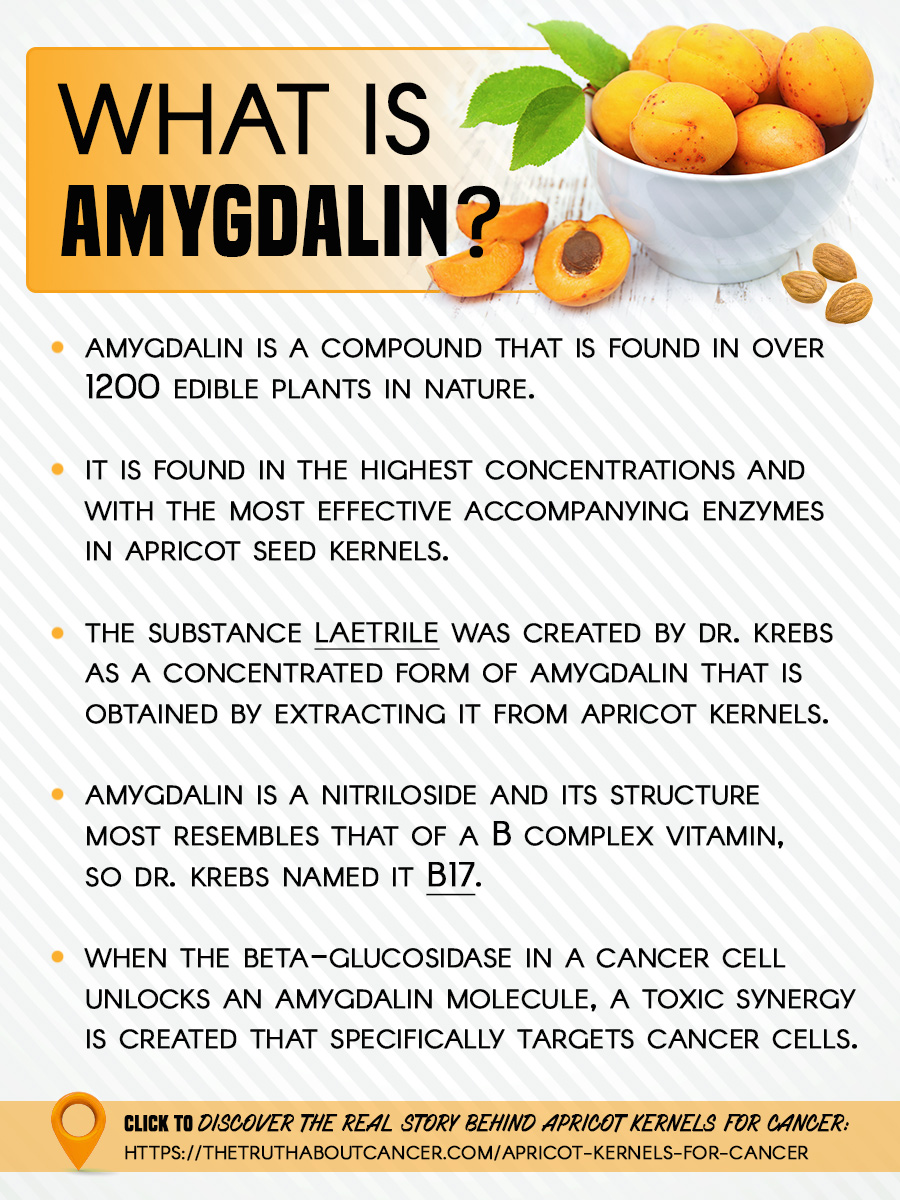 Editor’s Note: This article was initially published in July 2017 and was revised in January 2021.