You are here: Home / Nutrition / Food & Drink / The Best (Healthiest) Sweeteners for a Ketogenic Diet 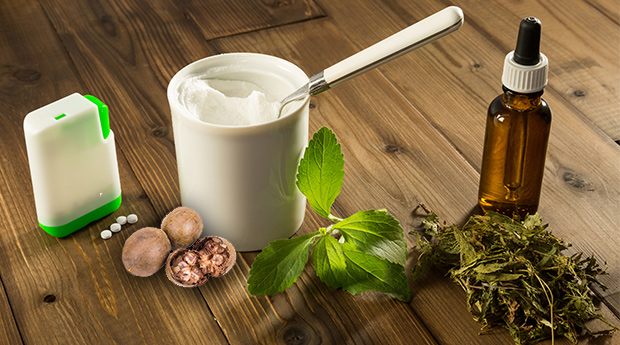 Editor’s note: This post was originally published in May 2017. It has been updated and republished in January 2019.

Almost all of us love sweet foods and an occasional dessert. Unfortunately, sugar and most sweets are among the very worst things to be consuming if you want to heal a chronic condition and function at your best. For challenging health conditions, a very low carbohydrate, ketogenic diet may be the best healing option. So, what are the best keto sweeteners when following a ketogenic diet?

Why a Ketogenic Diet

A ketogenic diet focuses on minimal carbohydrates, low to moderate amounts of protein, and high fat consumption. This diet allows the liver to produce ketones to fuel metabolism, rather than using glucose for energy.

Following a ketogenic diet is useful in improving insulin tolerance and reducing inflammation. These factors consequently reduce the risk of chronic disease and stimulate muscle development and fat metabolism.

It is well established that sugar can contribute to the development and progression of cancer. As a result, the ketogenic diet has become a popular approach to essentially starve cancer cells of their primary fuel source − glucose. Many individuals want to reach a state of ketosis to prevent or heal from cancer naturally.

There are many good natural sweeteners including stevia, monk fruit, raw honey, and yacon syrup. When looking at which sweeteners are best for a ketogenic diet, it is essential to consider which will have the lowest impact on blood sugar.

This is important because these low-impact sweeteners will help produce and utilize ketones rather than glucose for energy in the body. Now let’s look at the healthiest keto-friendly sweeteners.

What to Look for In a Healthy Keto Sweetener

When looking for a healthy sweetener (for a ketogenic or any type of eating plan), there are several things to consider:

I have found two types of sweeteners that meet these criteria − stevia and monk fruit. Let’s look at why these two sweeteners are the best when following a ketogenic diet.

A) Origin and Composition: Stevia is a plant in the ragweed family. It has been used for thousands of years as first documented by South American tribes. The tribes used stevia to sweeten tea and for the perceived health benefits.

Stevia is a zero-calorie sweetener and is 300 times sweeter than sugar. Stevia’s sweetness comes from two primary components that are isolated from the stevia plant. The two components are stevioside compounds and rebaudioside compounds.

The stevioside compounds have a sweet taste and a notable licorice-like aftertaste. The rebaudioside compounds are isolated in highly-refined commercial stevia products because they provide sweetness without the licorice aftertaste. These refined commercial stevia products may be healthier than other chemical sweeteners, but the whole-plant stevia extracts are the best option.

B) Impact on Blood Sugar: Stevia has no impact on blood sugar levels and has been found to have beneficial effects on blood sugar balance. It may even improve insulin signaling.

C) Nutritional Value: Another benefit to using stevia as a sweetener is that it adds a modest nutrient boost to foods. Analysis of a whole-leaf stevia extract found that the stevia leaf is a diverse source of nutrients. It contains a broad range of polyphenols, carotenoids, chlorophyll compounds, and amino acids.

Stevioside has been isolated in research as a potential immune-boosting agent. Evidence also suggests that stevia has mild antimicrobial effects when taken internally and has shown promise in combating Lyme disease.

A) Origin and Composition: Monk fruit (also known as lo han or lo han guo) is a small, melon-like fruit native to Southeast Asia. Monk fruit has been harvested and consumed for hundreds of years and used in Eastern medicine as a cold and digestive aid.

The intense sweetness of monk fruit extract is derived from a class of compounds called mogrosides. There have been five mogrosides isolated and they are referred to as mogrosides I-V (aka 1-5).

D) Health Benefits: Studies have found that mogroside V (one of the five compounds isolated from monk fruit) has the ability to inhibit tumor growth in pancreatic cancer. It does this by interfering with the rapid dividing of cancer cells, thereby preventing angiogenesis (blood flow to the tumor), and even promoting cancer cell death.

Additionally, monk fruit has almost identical immune-boosting and anti-microbial properties as stevia. Studies also show that monk fruit is an antioxidant and provides protection to the liver. All of these health benefits are the exact opposite of sugar’s detrimental effect on the body. 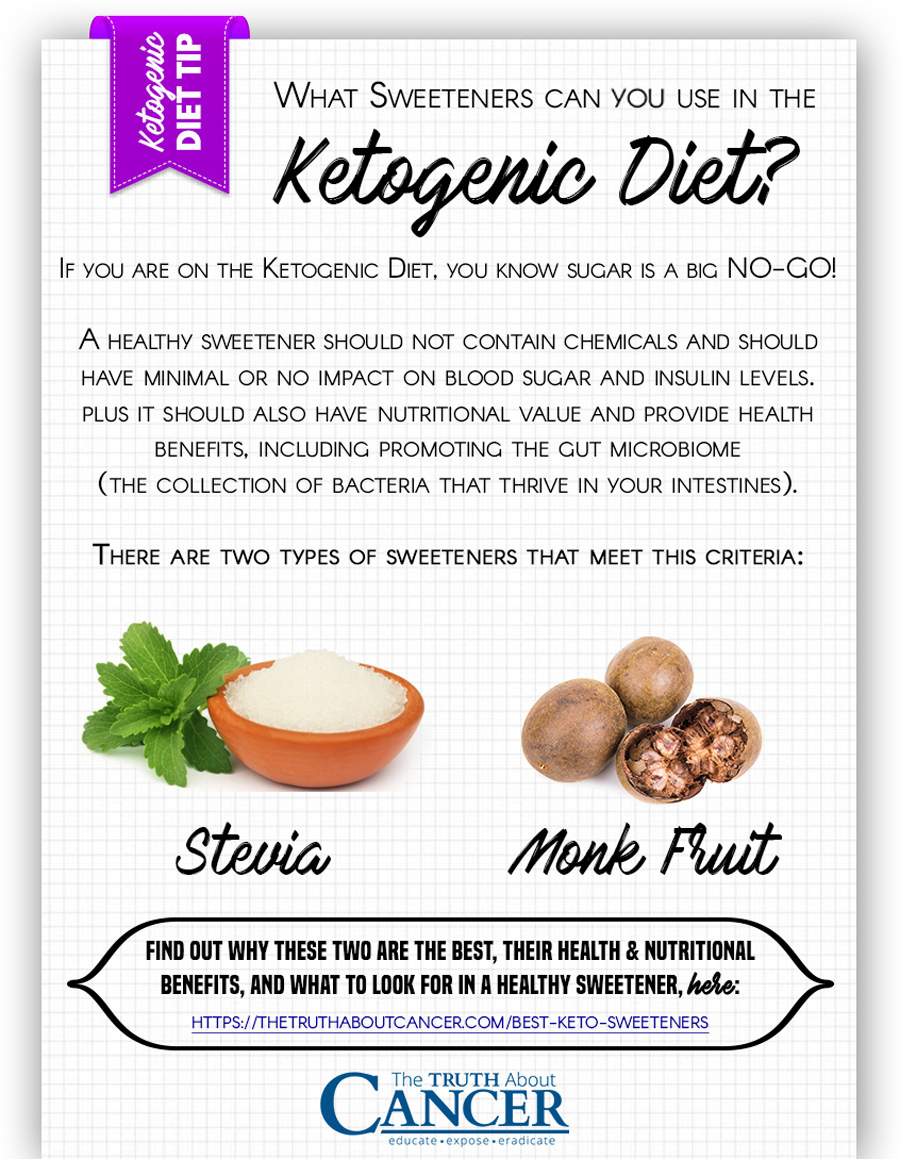 Things to Consider When Choosing Stevia or Monk Fruit

What About Sugar Alcohols for a Keto Sweetener?

I do not recommend sugar alcohols such as xylitol or erythritol because they can disrupt the gut microbiome and lead to digestive distress such as gas and bloating.

Some people can tolerate sugar alcohols, but sugar alcohols do not measure up to stevia and monk fruit with all their benefits as previously discussed.

Why Not Artificial Sweeteners?

Many people have replaced the sugar in their diet with highly-refined artificial sweeteners such as aspartame, sucralose, or saccharin (a.k.a. NutraSweet, Splenda, and Sweet-n-Low).

Artificial sweeteners are found in many processed and so-called “sugar-free” foods. These sweeteners should be avoided because they are toxic to the brain, destroy healthy gut bacteria, and may even cause weight gain by deregulating metabolism.

There are also monk fruit extracts that are combined with artificial sweeteners or sugar alcohols although they are advertised as monk fruit alone. That’s why it is very important to read the labels of the products you buy.

How would you like to transform your body so you look and feel great for life? With NO counting calories, portions, or carbs? Discover more about the ketogenic diet here.

←
Previous
You Are What You Eat! Taking a Stand Against Toxic Foods
→
Next
New GMO Labels Fail Consumers, Lack Transparency