Ty Bollinger: First of all you mentioned the fact that we’ve got the pharmaceutical industry. We’ve got kind of an industry driven by money, and we’ve got doctors that are really smart people today, brilliant medical doctors. They’re using treatments that really don’t seem to work as well as some of these natural things. Why is it?

Can you go back into the history of the medical association, The American Medical Association (AMA), and maybe take us back 100 years and stair-step people to current day and explain why that is. Because I’ve heard you talk about this in the past and your explanation is fascinating, and I want the listeners to be able to hear this.

G. Edward Griffin: Well thank you for that. It is a fascinating story. It’s an important story, and I suppose we don’t have time to go into all of it, but maybe the best way here is to kind of back into it to start with where we are and then go back and see how we got there. Where we are today is that, just as you described, these very smart doctors.

Let’s face it, there’s a very selective process there. You just don’t get into med school unless you’ve got a pretty good brain on top of your shoulders, so yeah, it’s the cream of the crop. The best students go into these schools, these medical schools, but they’re not taught anything about natural cures. They’re taught only about drugs, primarily, and drug reactions and the chemistry of this and the chemistry of that. And they have to become really pharmacists in a way; they have to become chemists before they can even make it through pre-med.

So that’s not necessarily bad, but it is a bias. I have come to know a lot of doctors in the last couple of decades since we’ve been working in this field. Many doctors who came from that lair of education and who gradually and sometimes very painfully had to break away from that and go back and re-examine some of these fundamental issues.

Many of them have made the transition and they speak quite openly about it now. For instance, they’ll say, “when I went to medical school we never learned anything about vitamins except we had maybe two hours of instruction on the structures of vitamins and minerals and so forth.” Two hours compared to hundreds and hundreds of hours about pharmacies and chemical reactions and so forth.

I remember there was one doctor, he said, “you know my wife knows more about nutrition than I do when I came out of school.” And that is not surprising when you realize—now we start to go backward in time. How did that happen? The fact that these great medical teaching universities and teaching centers are so great is because they’ve had a lot of money given to them.

Where did the money come from? Now we’re on the trail. You know the old saying “follow the money.” And usually that’ll take you right to it. Well, if you follow the money you’ll find out that most of it came from the pharmaceutical industry. 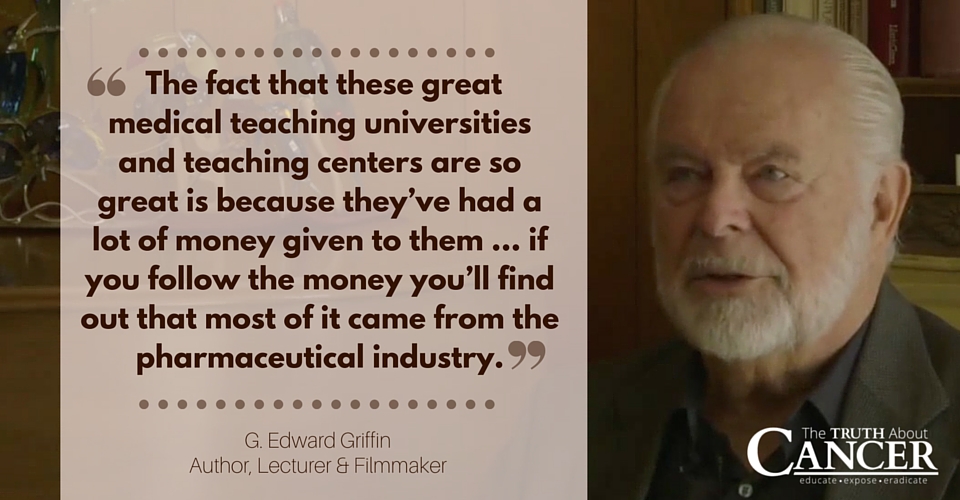 The pharmaceutical industry knows that if they give large grants to these universities they have a double benefit. First of all they have the appearance of being philanthropists. You know they’re doing good things and that’s always—that’s good for public relations. I’m not saying that they’re not doing good things. They probably think they are. But anyway that’s one advantage to giving tax exempt or tax free deductible donations to universities.

The other advantage is far more important, because once you have financed a research project you now have sort of a “first right” to whatever comes out of that research and consequently you can determine in what areas the research will go. I can assure that if I’m a big pharmaceutical company and I give a twenty million dollar grant to a research group I’m not going to be very happy if they start to research whether or not dandelions can be used in the control of cancer.

I want to make sure they’re going to research a drug that I am working on in the laboratories right now. That’s where I want the research to go. So they realize that they can take their own research budget and transfer it to a university or some research laboratory and get a tax deduction for it, knowing full well that if that’s what they’re researching, that’s what the data is going to be.

So I don’t need to go any further. You can understand when the money is coming from a source which has a vested interest in the outcome, what’s going to happen is the outcome is going to be what the donor wants it to be generally.