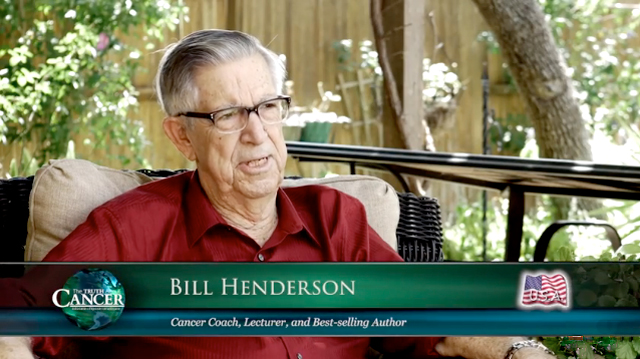 It is with great sadness and heaviness of heart that I write this article. Our good friend and health warrior Bill Henderson passed away on Monday, July 4, 2016, at the age of 84. Perhaps the date of death – July 4th – is significant, since Bill was a patriot and a veteran. He retired from the US Air Force in 1977 as a Colonel.

Rewind 22 years to November of 1994. After a 4 year battle with ovarian cancer and multiple rounds of chemotherapy, Bill lost his wife, Marjorie. After watching that, it was hard for Bill to believe that millions of people each year had to endure that same torture. He set out on a mission to let people know that they had options in their cancer treatment, writing numerous books and publishing a monthly newsletter.

Fast forward to 2006. When nobody had ever heard of “Ty Bollinger” or “The Truth About Cancer,” Bill Henderson supported me. When I published my first book, “Cancer-Step Outside the Box” in August 2006, Bill wrote a stellar review of the book and promoted it to his faithful email followers. He didn’t have to. But he did. He believed in me and he believed in our mission and supported this movement with his entire being.

In December of 2015, at the TTAC Charity/Awards Gala in Nashville, we were honored to present Bill with a “Lifetime Achievement Award” for his work as a “cancer coach.”

In an email after the gala, Bill told me “It was the highest point of generosity either of us have ever experienced. Your paying for our airfare, our stay in the most delightful hotel either of us have ever seen, the two marvelous meals, the transportation to your lovely home and, of course, the magnificent trophy − the most impressive recognition for the minor contribution to people’s health I’ve been blessed with for the last 17 years. We will cherish the memories of those two wonderful days for the rest of our lives.”

Little did Bill know that the next month he would be diagnosed with non-Hodgkin’s lymphoma (NHL) which is a form of cancer that starts in the lymphocytes. Over the past half year, Bill had been successfully utilizing multiple natural treatment protocols, with visible results and lab report improvement, steadily gaining momentum against the malignancy.

However, Bill’s form of NHL required frequent blood transfusions, especially platelets. The problem was that Bill also had thrombophlebitis, which resulted in blood clots in his legs. According to the physician who was treating Bill, it was a combination of heart attack, stroke, and pulmonary embolism in the wake of a blood transfusion which took his life. It was not due to cancer.

Bill’s widow, Terry, will be stepping into his shoes, to honor his legacy and continue his work. Bill’s most popular book is entitled “Cancer-Free – Your Guide to Gentle, Non-Toxic Healing” and it’s available here: http://www.beating-cancer-gently.com/cancer-free-your-guide-gentle-non-toxic-healing-fourth-edition.

I urge you to purchase this book and help support Terry and honor Bill’s memory. We love you Bill. You will be sorely missed.

←
Previous
Jason Winters Tea: A Quest for a Cancer Cure
→
Next
Why You Need an Anti-Fungal Diet for Cancer Prevention (video)