You are here: Home / Cancer Causes / Cancer Surpasses Heart Disease as Leading Cause of Death in Wealthy Nations 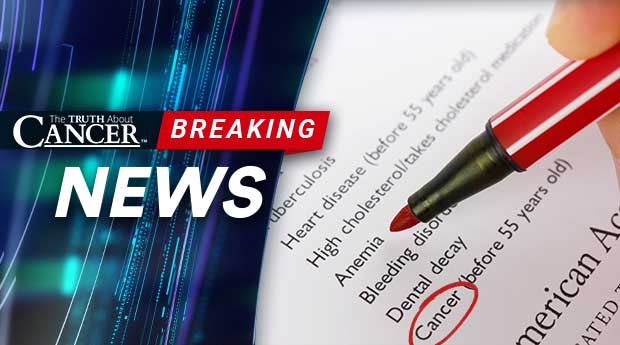 For the first time, cancer has overtaken heart disease as the leading cause of death – but only in wealthy nations. Two studies released this week in The Lancet described “epidemiological transition and growth” in cancer trends.

While cardiovascular disease remains the leading cause of death worldwide, the evidence shows that this could change in less than 2 decades.

The researchers confirmed that heart disease is still the leading cause of death worldwide – accounting for about 40% of all mortality. But in high-income countries, they said, cancer is killing twice as many people as heart disease. And the trends are alarming.

Globally, deaths from heart disease have been falling while cancer deaths continue to rise. The “war on cancer” simply isn’t working; the scourge of cancer is worse than ever. For decades, heart disease and cancer have been the first and second leading causes of death, respectively. But the way things are headed, they may soon trade places.

The CDC estimates that cancer will replace heart disease as the top killer in just two years. “We’re just on the cusp of the transition from heart disease to cancer as the leading cause of death,” said the study’s lead author Dr. Latha Palaniappan. At the current rate, children born today are more likely to perish from cancer than from any other cause.

A century ago, infectious diseases were the primary cause of mortality. With poor hygiene and food safety, polluted water, and other factors, these diseases were able to spread rapidly. It’s only been 90 years since the discovery of penicillin, when doctors were still using primitive treatment methods. Even in the 1940s, bloodletting was considered a valid medical treatment for pneumonia.

But as hygiene and medicine advanced, these diseases declined rapidly, and chronic disease became the world’s top killer. We’re now in a transitional phase. Cancer is on the rise, and wealth seems to be a factor.

Why are Cancer Rates Increasing?

Researchers were clear that cancer surpasses heart disease only in high-income or upper middle-income nations. But how can GDP determine the prevalence of chronic disease? For that, we have to look at the causes of each, and the growing trends in both developed and impoverished nations.

The reason for this is twofold: poor lifestyle choices and lack of medical resources.

Diet, exercise, drugs, and stress can all cause heart disease. And these things are a real problem. In the U.S., at least 160 million people are overweight (nearly 70% of the population). 79% of Americans say they are stressed every day. Over a billion people around the world regularly smoke cigarettes. And the quality of our food is dismal, with 70% of the Standard American Diet consisting of processed foods.

In most cases, heart disease is preventable, which means we can lower the death toll by making simple lifestyle changes. But there’s another factor when it comes to heart disease – medicine. People in wealthy nations have ample access to medical interventions that can extend the lifespan of someone who would otherwise succumb to heart disease. Thousands of heart surgeries are performed every year. The most common is bypass surgery, which redirects blood flow around an arterial blockage.

In the developed world, most people with cardiovascular disease are on medications that, while dangerous, can postpone the symptoms of the disease. In less fortunate nations, people simply don’t have access to this kind of medicine. Heart attacks and strokes are a death sentence in many parts of the world.

That’s why heart disease, while on the decline, is more deadly in low-income countries: they just don’t have the same access to medical care that high-income countries have. But cancer is a different story.

While heart disease is mostly preventable and offers a myriad of medical interventions, cancer is more complex. The root causes of cancer are everywhere and becoming harder to avoid – especially in high-income nations. Even worse, the standard treatments and screenings for cancer are likely to cause cancer themselves!

It’s true that cancer and heart disease share many risk factors. But carcinogens in the developed world are becoming nearly impossible to avoid. Glyphosate is sprayed on fields worldwide. It’s in our groundwater and food. Even organic crops may contain trace amounts of the stuff. AND WE KNOW IT CAUSES CANCER.

Cell phone radiation (a much bigger problem in high-income countries) is another cause of cancer. People eat, work, and sleep with these devices all day long. And with the introduction of the 5G network and a growing presence of wifi networks and Bluetooth devices, the radiation is harder to avoid.

To keep cholesterol down and prevent heart disease (a giant myth, by the way), doctors prescribe statin drugs. Over 35 million Americans take these drugs every year, and yet they have been linked to cancer. Asbestos was used liberally for years, even making an appearance in our talcum powder, and it also causes cancer.

And while some of these things are avoidable, many aren’t. In a bid to make as much money as possible, the pharmaceutical and agricultural industries have thrown public health by the wayside. You can’t even take a drink of water without potentially exposing yourself to cancer-causing toxins. Water filters and organic diets just aren’t cutting it anymore.

What Can We Do?

Since 1971, we’ve been waging a “War on Cancer”. But what have we accomplished? Last year there were 17 million new cases of cancer and almost 10 million deaths. Meanwhile, the cancer industry generates hundreds of billions of dollars every year. Chemotherapy is a known carcinogen yet remains the primary treatment for cancer. And there’s a reason:

There’s no money to be made in natural cancer treatments or prevention.

And industry is another problem. In 2017, agriculture and related industries contributed over ONE TRILLION DOLLARS to the U.S. GDP. These companies know that GMOs, herbicides, pesticides, processed “food,” and refined sugar are causing cancer (and obesity, and heart disease, and brain damage…) but they keep pushing their poisons. And who’s going to stop them?

Big Pharma is the biggest financial contributor to the FDA. Communication companies practically run the FCC. Agricultural bioscience companies literally sponsor, run, and publish their own safety studies. Regulation is a joke, because private money is still running the show.

And they’re all working to keep us in the dark. Tech giants are continuing to censor information, banning and blocking anyone who might put a dent in the bottom line of corporate interests. Even court documents are being removed from the public eye if they don’t support the corporate agenda.

So, buy your water filters. Grow your organic gardens. Say “no” to mammograms, amalgam fillings, and toxic cleaning supplies. But until we expose these industries for the liars and murderers that they are, nothing will change. Until we get the money out of our government, cancer will continue to rise.

By the time our children graduate, cancer will be the leading cause of death in the developed world. We can sit quietly. Or we can do something.

Write and call your representatives, spread the word, and fight for truth.