You are here: Home / Nutrition / Why Chewing Food is Important for Good Digestion (video)

Ty Bollinger: I’m glad that you mentioned that because one of the frequent questions that I get from people is, “if there’s all this nutrition in the seeds, should I chew them?” Absolutely! Otherwise, they just pass right through you.

Mike Adams: Of course. One of the things that I learned being a lab scientist is that human digestion is very weak. When I built the gastric-acid-digestion simulator, at first I thought that I had made a mistake because most of the foods that I ran through the simulator, were not well digested.

It turns out that chewing is the single most important step in the digestion process. We actually now have to pre-chew with a chewing device before we put foods into the gastric-acid simulation. It’s a synthetic gastric acid, I should say. It’s not a computer simulation. It’s a physical process, yeah. But, if you just take for example, beef jerky, and you put it into the gastric acid that’s the same pH as human digestive acid, it barely gets digested at all.

Ty Bollinger: I’m glad that you mentioned that because chewing is so important. Not only does it help you to digest the food, but it also releases enzymes.

Ty Bollinger: As you chew the food in your mouth, it releases enzymes that help you to digest the foods as well.

Mike Adams: You’re right. As a detox technique, chewing the foods also increases the surface area of the insoluble fibers. Many of the fibers in a chunk of food are locked inside of the food. If you want those fibers to be beneficial to you, to bind with all things about which we’ve been talking (mercury, lead, whatever, arsenic), you need those fibers to be available physically available to the digestion liquids. Chewing is what allows that to happen. 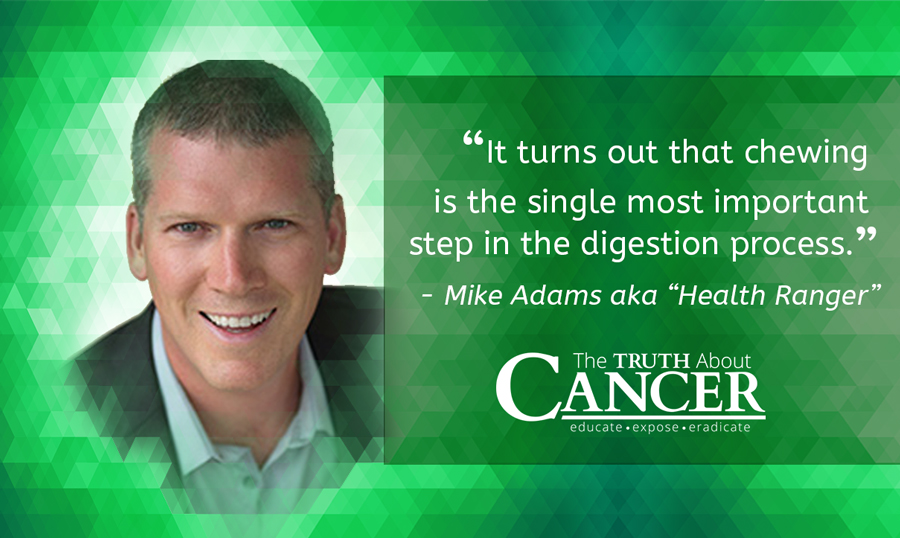 Ty Bollinger: It’s like, my kids have these little sponges that are tiny, but then when you add the water to them, they blow up into these huge [sponges]. So, it’s like that. You unlock these fibers, so that they can bind to the heavy metals, to the radioactive particles, and so forth, and that you can excrete them out of your body.

Ty Bollinger: That’s why chewing is so important − one of the reasons.

Mike Adams: The other big ah-ha in all of this is that it gets us back to the amazing power of a common sense whole-food diet. When you look at hey, there might be toxins in some of these foods, but if you actually eat whole foods, there are natural things in there that will absorb the toxins without you even knowing about it.

So, as I have done this research, what it has really done is given me more and more respect for Mother Nature and more amazement at how nature achieves balance and protects your body from toxins in the environment through things that you never were even aware of. Who ever knew, eating strawberries as a kid, that strawberries were blocking the mercury?

Ty Bollinger: We just thought that they tasted good.

Mike Adams: Exactly! But, there’s a natural balance in there, so even if there’s arsenic in apple seeds, if you eat apple seeds, most of the arsenic is going to stay in the apple seeds because they hold onto it.

←
Previous
Can SAR Value Help You Choose the Safest Cell Phone?
→
Next
Mammography vs. Thermography (video)