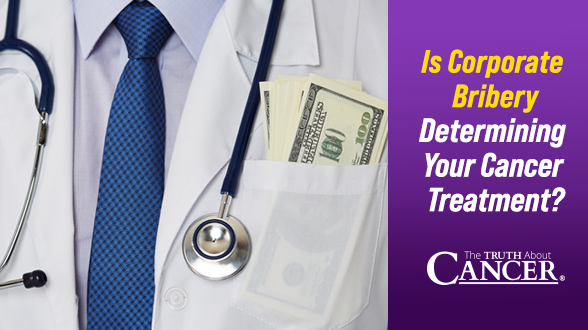 The first study to evaluate reimbursement policies and clinical care in oncology, the review found that oncologists often change their treatment recommendations and prescriptions based on incentives from the pharmaceutical industry.

What’s worse, the companies that manufacture cancer drugs saw greater profitability where incentives were greater. And while not all doctors are corrupted by financial incentives, a comprehensive review of 18 studies found that the majority of cancer doctors are – whether they realize it or not.

We already know that doctors actually profit from chemotherapy, but it turns out that the influence of corporate bribery is far more extensive. This is a problem for three primary reasons:

Bribery’s Effect on Quality of Care

The most obvious problem with the results of the study is the impact it has on care. A cancer diagnosis can be a frightening time in our lives, and we often turn to specialized doctors for help. What we don’t expect is that those doctors will make decisions about our care based on how much money they can make instead of what treatment is best for you.

There were many trends revealed in the study, and none of them are good news for cancer patients. For starters, the review found that some doctors choose the most profitable treatments rather than the most effective ones. When it comes to breast cancer, doctors are especially biased.

In one of the studies, doctors were more likely to avoid mastectomies in favor of other therapies when incentives were higher for breast-conserving therapy than mastectomy. When there was no financial incentive, the same study did not find any disparity in treatment practices. This shows that for many women battling breast cancer, the treatment protocols prescribed by their doctors may be based on the financial incentives.

Sadly, the same trends were brought to light regarding cancer drugs. For many patients, the hope of a new cancer drug can seem like the difference between life and death. After all, that’s what the doctors and manufacturers tell you. As it turns out, oncologist’s prescribing practices are directly correlated to the profitability of those drugs to the physicians.

There are more examples in the study, including reduced use of drugs when the cost is lower, higher instances of radiation treatments when oncologists can self-refer, and changes in minor procedures from office visits to “outpatient” designations.

Although many doctors may not realize their own bias, the evidence shows that oncologists regularly put profit before patients.

The Medical Mafia Drives Up Cost

Stemming from this financial influence in oncology, rising medical costs are another major concern. For decades, we’ve seen the pharmaceutical and medical industries do everything in their power to control and inflate drug prices. Lifesaving essentials like EpiPens and insulin are almost impossible to afford for many whose lives depend on them.

Remember Eagle Pharmaceuticals? This company exploited loopholes in FDA regulations to hold treatments hostage and ensure that no cheaper, generic version of their blood cancer chemotherapy drug was available. And while our position on chemotherapy drugs is not in question, the fact that companies continue to manipulate the system to generate profits is infuriating.

And these incentives make it nearly impossible to lower the price of medicine and treatment. Here’s how the cycle works:

This vicious cycle continues until something interrupts the chain. A cheaper generic option, a lawsuit, lowered incentives, or another drug with better incentives.

Patients don’t always see the price-gouging that results from Big Pharma’s bribery scheme because most Americans go through some form of insurance. For many, that includes Medicare.

This is a veritable gold mine for the medical industry because Medicare can’t negotiate drug prices. Despite insuring more than 60 million people, Medicare officials and HHS representatives have no ability to work with manufacturers to lower prices.

The result? As long as the medical mafia continues to line the pockets of cancer doctors, they are essentially printing their own money – and taxpayers like you and I foot the bill. 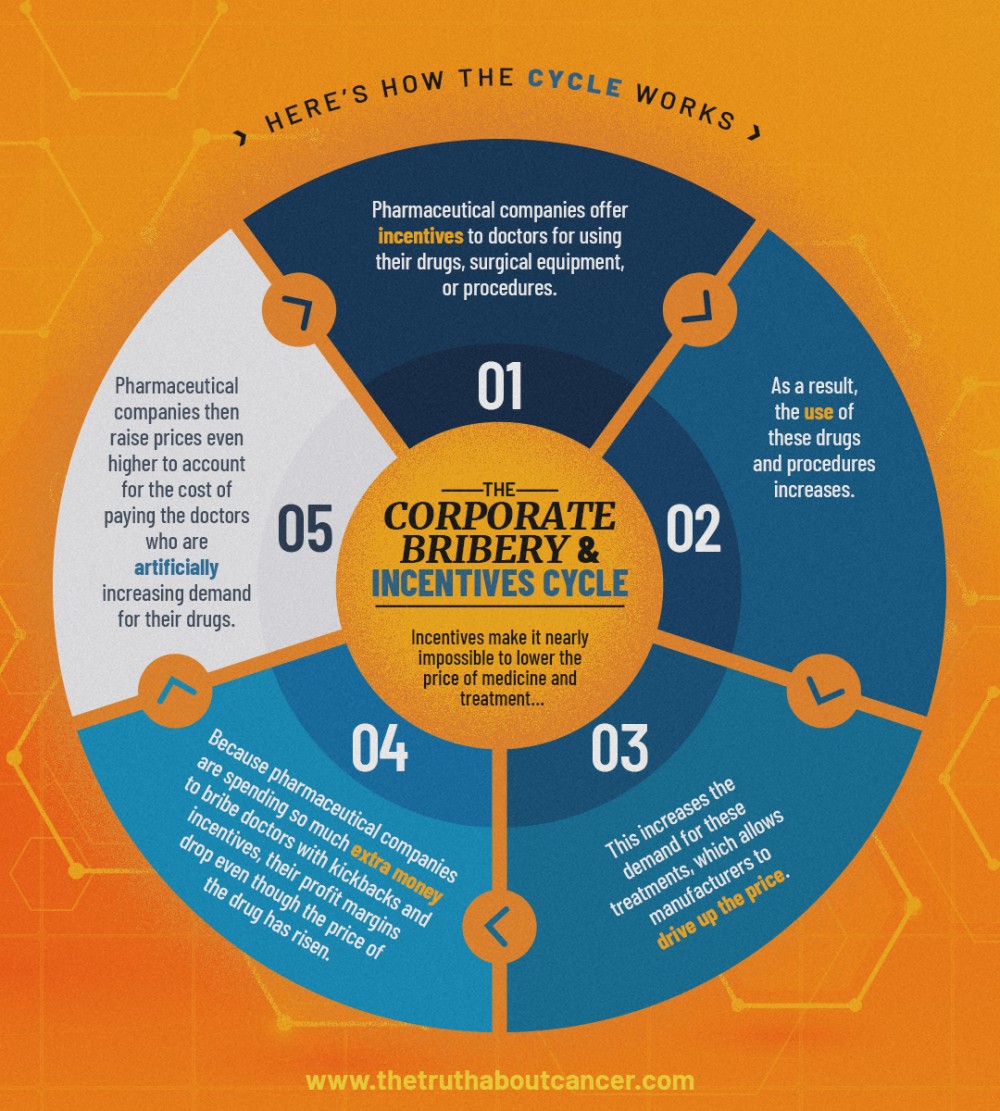 The Bells of Corruption Are Ringing… Yet Again

What this whole system has created is as close to a drug cartel as MS-13 – and far more deadly. If that sounds like alarmism, consider the following:

There are currently thousands of pending criminal cases against drug manufacturers and their executives, including Bayer and Johnson & Johnson. And many of these executives are receiving much more than a slap on the wrist for their behavior.

A few years ago, a jury found the top executives of pharmaceutical company Insys guilty of racketeering. All 5 executives, including former billionaire and company founder John Kapoor, are now convicted felons who will serve time in federal prison.

Their crimes? Bribing doctors to prescribe their fentanyl painkiller Subsys and lying to insurers about patient need for the drug.

These doctors were being lobbied, bribed, and coerced by some of the best in the business. Insys regularly hired adult entertainers and even sex workers as sales executives, and court testimony revealed that doctors would often be invited to “business lunches” at unsavory adult venues. Executives even created a promotional rap video encouraging their sales team to keep pushing their drug.

One lyric referenced titration, which is how sales reps would convince doctors to quickly increase doses of Subsys, saying “I love titration, yeah it’s not a problem. I got new patients and I got a lot of ‘em.” Fentanyl is one of the deadliest drugs in the world, contributing to an opioid epidemic more deadly than car accidents.

But the doctors motivated by these incentives may be even worse. In just one month, 60 doctors were charged with crimes that included illegal prescriptions, drug trafficking, prostitution, and insurance fraud. Some doctors even performed unnecessary tooth extractions so they could prescribe the drug. The doctors were from 5 different states in Appalachia and wrote more than 350,000 illegal prescriptions.

The details surrounding the charges are abominable and show that even medical doctors can quickly begin to behave like hardened drug kingpins. Brian Benczkowski, an assistant attorney general in charge of the Justice Department’s criminal division said:

“That is the equivalent of one opioid dose for every man, woman, and child in the five states in the region that we’ve been targeting. If these medical professionals behave like drug dealers, you can rest assured that the Justice Department is going to treat them like drug dealers.”

Until we get money out of medicine and out of politics, corporations will continue to run the show. People facing a cancer diagnosis need hope more than anything. But doctors are choosing treatment plans based on profitability instead of what’s best for the patient. It’s important to find the right doctor who will work with you to help your body heal.

Cancer is NOT a death sentence, and you don’t have to leave your treatment in the hands of greedy corporate executives.

←
Previous
Does Your Doctor Have Your Best Interests at Heart?
→
Next
How to Find the Right Doctor for Cancer