You are here: Home / Cancer Treatments / Corrective Medicine: Fighting the Disease, Not the Symptoms (Part 2 – Video) 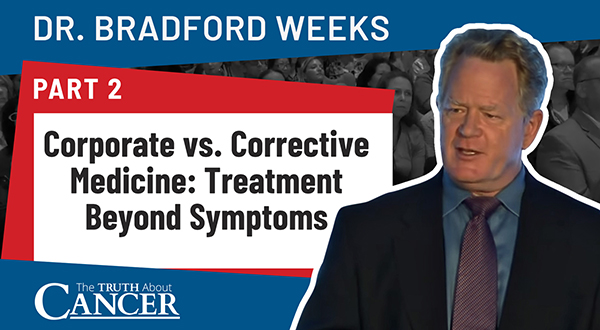 Ty Bollinger: Hello everyone. Ty & Charlene here. Did you see the first part of Dr. Brad Week’s presentation from TTAC LIVE Orlando? Well, we are back now with Part 2.

Dr. Bradford Weeks: And so, part of the sub-theme of this talk is not only to understand that symptoms are there to help you, but to understand that your medical doctor, your holistic corrective medical doctor who is trying to help you, is being considered a medical terrorist. He or she is funneling funds away from corporate medicine by teaching you simple things to do, and they’re being picked off right and left. I’ll describe briefly how my license was attacked in 2012, and how any time your doctor stands up to do what’s best for you and not best for the corporation, they typically are considered a terrorist.

So that’s the law in the state of Washington. And what we’ve been doing is—my license, by the way, I was attacked because I was deemed a “theoretical risk of harm.” Because the doctor who was examining my work, he acknowledged that everybody got well and there was no harm done, but he didn’t understand how I did it, and therefore I was lucky and therefore I was a theoretical risk of harm. But it’s really a concentrated effort to take medical doctors who are not doing corporate medicine out of the game.

Now you deserve better than corporate medicine. Corporate medicine is profit over people, but more importantly, it’s making the patient a renewable resource. “This week we’ll cut off this breast. We’ll consider you cured of cancer. You come back next year we’ll cut off the other breast, maybe we’ll do some other stuff.” It’s just harvesting in an inhumane way, people, because they’re looking at the symptom, not the cancer process, which is fueling this process, but rather the symptom. 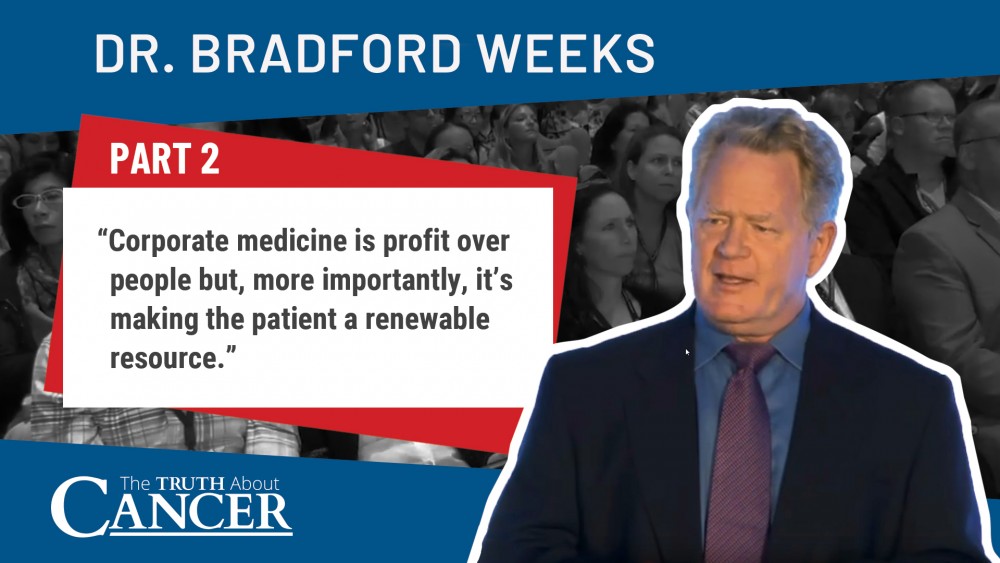 The other rule to understand in medicine is that if it’s not a profitable solution, it will be ignored as a problem. If you can’t make money on the problem, nobody’s going to talk about it, okay. That’s why mending the NET is not talked about. The nutrition, exercise, and thought… nobody gets rich helping people with that.

So I like this graph, corporate medicine is the puppet master, big pharma, and so forth.

And we have the puppeteers controlling the government enablers. That’s the CDC, the FDA and so forth. These people should be accountable to the voters and are not. I’m tremendously excited to get the CDC cleaned up. I think there’s a lot of problems there, we’ve seen in the vaccine studies. But we have to be advocating as citizens to try to make these government agencies work well.

Here’s just one quick example. I read this article in 2007; I contacted the author. He had published that just breathing oxygen would help your red blood cells develop and you don’t need to spend thousands of dollars on EPO drugs. I said, “This is a great research.” He says, “That’s been published for five years; you’re the first person to call me.” Just breathing oxygen, right, you can do that or you can spend thousands of dollars on red blood cell medications.

So, the symptom is a healing gesture. Why do we blame the symptoms if we don’t blame the ambulances at the site of an accident, right? Nobody blames the ambulances for causing the problem, and the symptoms are not the real issues, so I’m kind of kicking a dead horse. It goes back to Samuel Hahnemann, the father of homeopathy.

This is my daughter Sarah, who is finishing her last year in medical school as an osteopath at my favorite statue, this is a shrine to the father of homeopathy, and he said, “Like cures like.” He quit his medical practice because he was not helping people. He felt that the training of the day was hurting people more than was helping people, and he quit his practice and he created homeopathy.

Ty Bollinger: Wow – that’s great information from Dr. Brad Weeks who is a good friend of ours. We hope you learned a lot from this video.

Charlene Bollinger: If you did, please share this on social media and let your friends and family know about The Truth About Cancer. Thanks and God bless!

←
Previous
Carbohydrates and Keto: How Holiday Foods Harm and Heal
→
Next
How to Optimize Your Cells for Healthy Aging

Dr. Weeks completed undergraduate studies at Dartmouth College (major: Political Philosophy) then, prior to medical school training at the University of Vermont, Dr. Weeks worked in the Harvard system doing two years of research at Massachusetts General Hospital’s mineral metabolism unit working on osteoporosis (calcium, magnesium and vitamin D). In addition, he studied nutrition (including macrobiotics with Mishio Kushi in Brookline, MA), acupuncture, massage (shiatsu), music therapy (Tomatis method, power of chant), Anthroposophical medicine and classical homeopathy. Medical school at the University of Vermont was followed by medical internship (1 year) and psychiatric residency at Dartmouth Hitchcock Medical Center (3 years). He is a specialist in psychiatry and developed the field of “corrective medicine and psychiatry”.