You are here: Home / Cancer Causes / Does Smoking Marijuana Cause Lung Cancer? (video)

Ty Bollinger: But in California, it is legal to grow…

Ty Bollinger: Talk real quickly, if you will, about the medicinal effects of the hemp plant, or cannabis.

Dr. Quillin: Hemp, cannabis, is arguably the most useful plant on earth. If you do a history of it, you look at canvas which is what our ancestors used for Conestoga wagons and for the clothing. Canvas comes from the word cannabis, because cannabis was the material that they used to make all of their clothing and canvas.

It lasts longer than cotton or polyester. If you go back and look at your history, it was around 1937 when DuPont got its patent for polyester, and that was the beginning of the witch hunt to get rid of cannabis. Because it was competition. You look at–you can use it for paper pulp, for clothing. You can eat it, the food, the seeds are high in omega-3 fats, high in protein. The oils, from hemp oil, is delicious, nutty tasting, and high in omega-3s. And then there’s the medicinal parts, the cannabinoids. And the THC, tetrahydracannabinoid, and CBD, are two different fractions.

The government has had this illogical approach to cannabis, because you think—it’s a category-1 drug, meaning they think it’s more dangerous than cocain. Schedule-1. Schedule-1 means that it’s addictive, dangerous, and has no therapeutic value, which is ridiculous. I mean, there are many studies that have been done. One of them, for instance, the DEA, Department of… 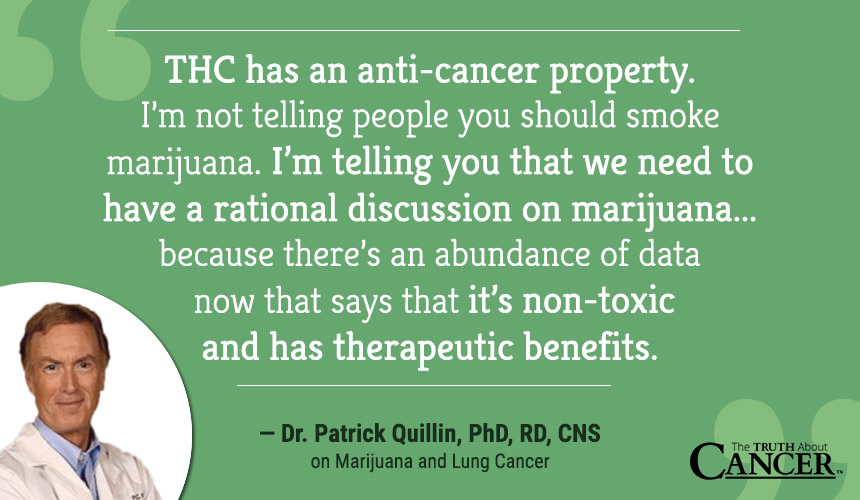 Dr. Quillin: Drug Enforcement Agency, decided they want to prove how unhealthy marijuana was. And so they went to a major researcher at UCLA, University of California at Los Angeles, and said, “We want you to prove that smoking marijuana causes lung cancer.” He said, “Shouldn’t be a problem.” They did a huge study, prospective, randomized trial, and he said, “Not only it doesn’t cause it, it actually helps to prevent it.”

THC has an anti-cancer property. I’m not telling people you should smoke marijuana. I’m telling you that we need to have a rational discussion on marijuana, hemp, cannabis, because there’s an abundance of data now that says that it’s non-toxic and has therapeutic benefits.

The CBD, the cannabinoids, apparently there are cannabinoid receptors in the human body, and it’s almost as if nature designed, “Here’s lock and key. And this fits in, and it improves.” It’s an adaptogen, not unlike ginseng, or garlic, or substances that just make everything work a little bit better.

We need to have an adult discussion on it. If you compare it to tobacco and alcohol, the risk to benefit, the cost ratio of cannabis is in favor of legalizing it, regulating it, and taxing it.