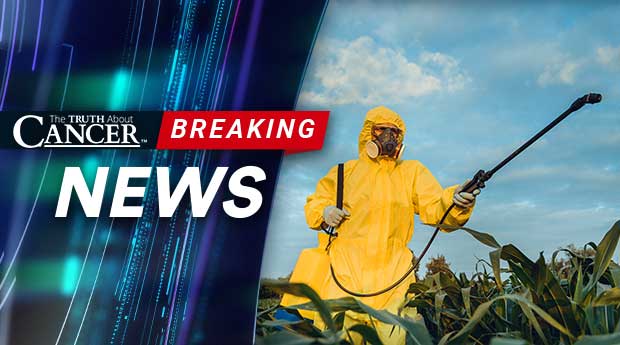 Last week, a half dozen states sued the EPA over a toxic agricultural chemical. Contrary to what you may be thinking, it wasn’t glyphosate. The pesticide is called chlorpyrifos, and it’s been around for half a century. In fact, millions of pounds are sprayed on U.S. crops every year. Now, states want it banned.

The problem goes back to a decision last week by the EPA to continue allowing the use of chlorpyrifos. This decision was made despite research that showed the chemical was linked to brain damage – particularly in children. Chlorpyrifos has already been banned for household use nationwide, and Hawaii banned it statewide last year.

Chlorpyrifos, often marketed as Lorsban, is used on many crops, including corn, cranberries, and almonds. For many farmers, it is considered a last line of defense against certain pests. The Asian citrus psyllid, for example, has been decimating citrus and almond harvests, and seems responsive only to chlorpyrifos.

But pests may not be the only thing the chemical kills.

Studies have shown that chlorpyrifos is toxic, causing brain damage and developmental disabilities. “The scientific evidence has been clear for years. Chlorpyrifos is toxic to farm workers and linked to irreversible neurodevelopmental harms in children,” said Dr. Elena Rios, president of the National Hispanic Medical Association.

Manufactured by Dow Chemical, the company that introduced mustard gas, napalm, and Agent Orange, chlorpyrifos is a dangerous nerve agent. According to Dana Boyd Barr, an exposure scientist at Emory University, organophosphates like chlorpyrifos are extremely toxic. “They’re considered junior-strength nerve agents because they have the same mechanism of action as nerve gases like sarin.”

The chemical causes irreversible brain damage and is especially harmful to young children. Studies have linked it to neurological damage, memory loss, learning disabilities, and cognitive decline. But Dow Chemical and the EPA have their own studies to lean on.

And this isn’t some wild conspiracy theory about big business; it’s backed by science. An article published last year in the journal Environmental Health took a hard look at the accuracy of these studies. The researchers evaluated the safety studies submitted to regulatory authorities by Dow Chemical for chlorpyrifos. They determined that the results were massively flawed and significantly misleading.

Here’s an excerpt from the journal:

Authorization of pesticides for market release requires toxicity testing on animals, typically performed by test laboratories on contract with the pesticide producer. The latter provides the results and summary to the regulatory authorities. For the commonly used pesticide chlorpyrifos, an industry-funded toxicity study concludes that no selective effects on neurodevelopment occur even at high exposures.

In contrast, the evidence from independent studies points to adverse effects of current exposures on cognitive development in children. We reviewed the industry-funded developmental neurotoxicity test data on chlorpyrifos and the related substance chlorpyrifos-methyl. We noted treatment-related changes in a brain dimension measure for chlorpyrifos at all dose levels tested, although not been reported in the original test summary.

We further found issues which inappropriately decrease the ability of the studies to reveal true effects, including a dosage regimen that resulted in too low exposure of the nursing pups for chlorpyrifos and possibly for chlorpyrifos-methyl, and a failure to detect any neurobehavioral effects of lead nitrate used as positive control in the chlorpyrifos study. Our observations thus suggest that conclusions in test reports submitted by the producer may be misleading.

This discrepancy affects the ability of regulatory authorities to perform a valid and safe evaluation of these pesticides. The difference between raw data and conclusions in the test reports indicates a potential existence of bias that would require regulatory attention and possible resolution.”

So, we essentially have research from two camps:

1. Independent, peer-reviewed research that shows a clear link between chlorpyrifos and brain damage

2. Industry-funded research that has been deemed flawed, misleading, and inaccurate by the medical community

The EPA should have banned the product years ago, but Andrew Wheeler – a Washington insider with a long history of lobbying for the private sector – has refused. (This isn’t all that surprising, considering the EPA chief recently defied scientists and experts by refusing to ban the use of asbestos in the United States.) In an official statement, the EPA said that the science was not “sufficiently valid, complete, or reliable,” and chose to stick with the bogus safety studies instead.

In November 2015, it seemed like the EPA may finally ban the chemical for good. Under pressure from the Natural Resources Defense Council and Pesticide Action Network, they released a Federal Register in which they admitted that they couldn’t prove chlorpyrifos’ safety and said they planned to remove it.

At this time, the agency is unable to conclude that the risk from aggregate exposure from the use of chlorpyrifos meets the safety standard of section 408(b)(2) of the Federal Food, Drug, and Cosmetic Act (FFDCA). Accordingly, EPA is proposing to revoke all tolerances for chlorpyrifos.”

But this all changed after an aggressive lobbying campaign by Dow Chemical immediately following the EPA’s statements. Over the next year, they would spend over $13 million lobbying the government and regulatory bodies in defense of their product.

Dow’s former chairman and CEO is a close advisor to the president and cut a check for $1 million dollars to finance his inaugural celebration. After the massive lobbying campaign, his lawyers sent letters to cabinet heads asking them to “set aside” the government studies that found chlorpyrifos was dangerous.

Meanwhile, children continue to suffer. Even a small amount has been shown to hinder brain development in children. But with use on over 50 fruit, nut, cereal, and vegetable crops, it may be impossible to avoid. In 2016, more than 640,000 acres were treated with chlorpyrifos in California alone.

Kristin Schafer, executive director of Pesticide Action Network, can’t believe the EPA has allowed its use to go on:

[It’s] absurd that we have to ask the court to force EPA to do its job. Scientists have known for years that chlorpyrifos puts the health of farmworkers and children in danger. Instead of acting on this evidence, EPA has chosen to ignore it—putting Dow Chemical’s profits before public health.”

After years of getting sandbagged by corporate lobbyists and special interests, the states are taking citizen safety into their own hands. California, Maryland, Massachusetts, New York, Vermont, and Washington have sued the EPA, demanding they ban the chemical once and for all.

Chlorpyrifos is a toxic nerve agent that’s poisoning farmers and causing irreparable brain damage in our children. For their sake, let’s hope the courts do what the EPA won’t.