You are here: Home / Cancer Prevention / The #1 Exercise to Detoxify and Move Lymphatic Fluid (video) 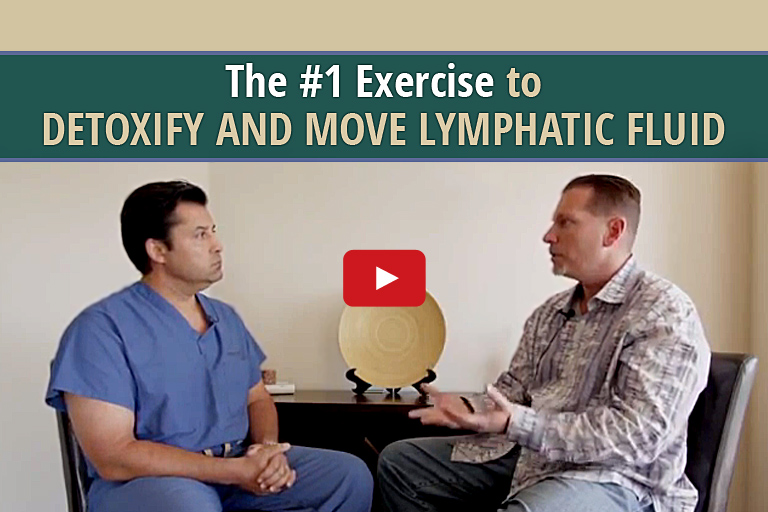 Video Transcript: The #1 Exercise to Detoxify and Move Lymphatic Fluid


Ty Bollinger: You mentioned exercise. One of the best exercises that I’ve been getting over the course of this investigative report from different doctors and researchers is that you jump on a mini trampoline to stimulate your lymphatic system to help you detoxify. Talk about the lymphatic system. What is the lymphatic system?

Dr. Irvin Sahni: So the lymphatic system is something that I think people aren’t as aware of as their lungs and their heart. The lymphatic system is basically to some degree an overflow valve for the body. So what happens is we all know our heart pumps blood out to our distal extremities. They go from arteries and the arteries go to capillaries and then the capillaries – so most of the blood that pumps through your body is constantly pumping through your body; goes from arteries to capillaries and passes back into your heart through veins and goes in a circuit through your heart and your lungs.

Well, that fluid doesn’t jump back into your veins. It has to go somewhere. That’s why some people get edema. They’ll get swelling in their ankles and swelling in different parts of their bodies. Well, where does that fluid go? Does it just disappear? It goes into your lymph system.

But this extra fluid that sort of bleeds out through these capillaries will then feed back into that system. It also passes through other parts of your body including your spleen. That’s also sort of considered part of your lymphatic system. Your thymus, your tonsils, and your adenoids − what a lot of people have removed as a child. There’s lymph tissue or there’s lymphocytes and those lymphocytes recognize pathogens, viruses, bacteria, or things that are considered non-self and your body builds immunity through those lymphocytes which is what’s effective when someone has an immune deficiency disorder, whether you believe in HIV virus or not.

There’s certain immune deficiency disorders and T4 cells and helper cells; different classes of cells are affected when the immune system falters. And those are the little soldiers that are facing these pathogens, these bacteria, these antigens, toxins even as they pass through the lymphatic system. Sort of like your oil filter, I guess; they’re filtering out some of the nasty stuff.

So the reason jumping on a trampoline is useful is because your lymphatic system, unlike other parts, like your muscles or your heart or your skeletal muscle, it doesn’t have its own muscle. It doesn’t have a muscle wrapped around it like arteries have muscle around them. It’s called the tunica media. It’s what helps vascular changes. You can actually change the pressure by those muscles clamping down or letting go.

Well, the lymphatic system doesn’t have that ability. And so it depends on the skeletal muscles for that return. So by compressing your thighs, by just simply walking you’re actually pushing lymph through your body. It’s sort of passively pushed through by the other muscles in your body. And so by hopping on a trampoline you’re basically forcing those muscles to contract and you’re helping that drainage, instead of having it collect in your ankles like you see people with swollen ankles; you’re helping some of that return.

That’s why when people start having problems with blood pressure and their heart they sometimes will get swollen ankles because that big pressure differential is pushing all that fluid out into their interstitial tissues and their lymph system can’t keep up, especially if they’re sedentary. If they’re sitting around, they’re sick, they’re hurt, they have congestive heart failure and their heart has poor return so they get dizzy quickly. They’re not going to be able to get up and walk around to help push that lymph back into their venous system.