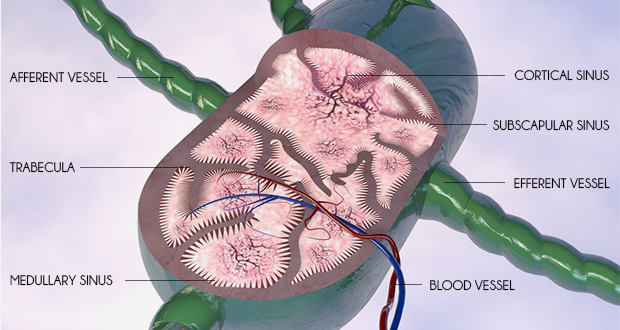 On March 6th the lymphedema community will celebrate the 22nd annual Lymphedema Awareness Day, otherwise known as Lymphedema D-Day. But despite all these years of awareness, lymphedema is still not curable and remains “an unfortunate side effect” of conventional treatment for cancer. It’s time for the medical community to acknowledge that lymphedema is often avoidable and linked to lymph node removal.

Surgery doesn’t address the underlying cause of why someone got cancer in the first place, and neither does chemotherapy or radiation! This is an important concept to grasp.

Moreover, when lymph nodes capture cancer cells, might they just be doing their job? And if so, is this really metastasis, which is what is commonly believed?

Monica Morrow, MD, a well-known clinical researcher and conventional medical doctor, has been studying tissue from breast cancer survivors who have small numbers of cancer cells called micro-metastases in their lymph nodes. Currently, even small findings of cancer cells such as these are considered deadly by the allopathic community.

But Dr. Morrow’s findings show that these small numbers of cancer cells do not affect survival rates. Other medical professionals are just beginning to question the common practice of lymph node removal. Surgical removal of lymph nodes, as a way of reducing metastasis, may actually be causing more harm than good because of the potential lifelong complications of lymphedema.

A European study in 1981 evaluated 716 women with breast cancer and found no difference in survival when extra lymph nodes were removed.

Yes, that’s right, this study was done in 1981. And yet, how many times in recent years  have you heard someone with cancer having surgery to have their lymph nodes removed? I have heard it dozens of times. However, one must ask of this accepted practice, “Has the correct outcome been looked at to justify surgical removal of lymph nodes?”

The key issue that is not being discussed is… what is the most important outcome when the lymphatic system is harmed, either by surgery or radiation? 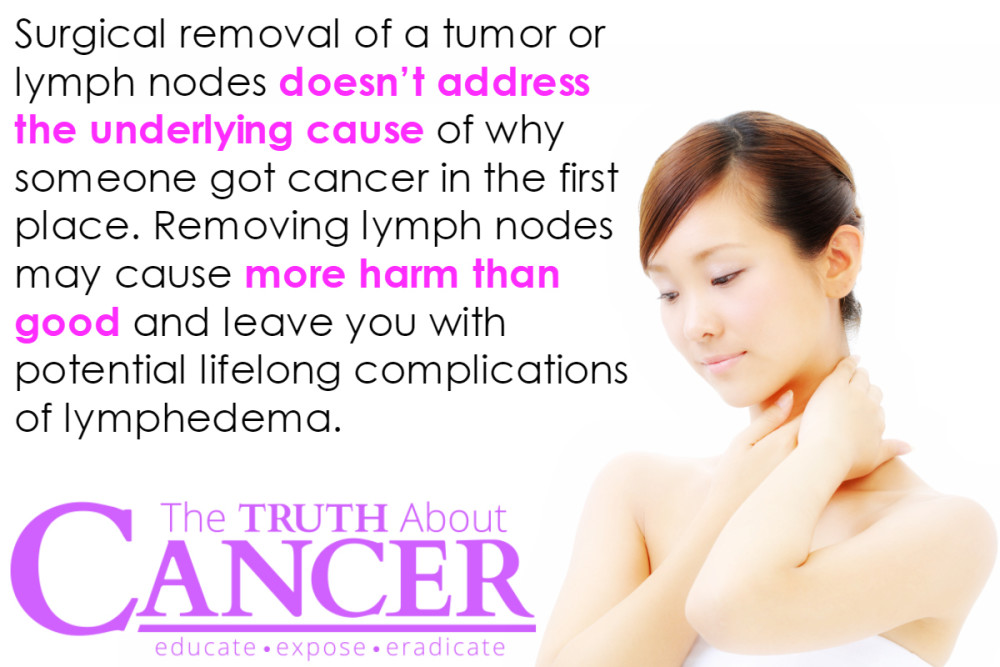 Beginning in the late 1800s massive surgeries were performed for breast cancer. This universal surgery, called the Halstead Radical (after its originator), removed the entire breast, muscle, axillary area (underarm) and more, in an effort to cure breast cancer.

Almost 70 years later European surgeons began offering lumpectomy, a less aggressive partial breast removal surgery, and found that survival rates were similar. In addition, a large clinical trial from the United States proved the same thing with a report on a 10-year follow up in 1985. This study actually compared mastectomy to lumpectomy with and without radiation and over time has continued to show similar survivals for each segment of the trial.

The one area that unfortunately has NOT been re-examined is axillary lymph node dissection. For this reason, lymph node removal during surgery continues to be part of the procedure even though in some, fewer nodes are being removed.

What has not been concluded from any clinical trials is whether or not removal of lymph nodes directly impacts survival.  Especially enough to warrant the potential complications that could arise any time in an individual’s life afterwards.

Prior studies have not been able to show a survival benefit from lymph node removal. In fact, a 2003 paper stated: “No published randomized controlled trial exists that demonstrates improved overall survival for patients with cancer of any type undergoing surgery of the regional lymphatics. We believe the presence of tumour in the regional lymphatics indicates the presence of systemic disease, and therapeutic interventions should be directed accordingly.”

So are those people with lymph node involvement already dealing with more advanced disease that current medical technology doesn’t know how to detect?

Imagine, then, if complementary or alternative therapies were incorporated in an effort to improve survival, instead of going solely to radiation and/or surgery.

After invasive treatments such as surgery and/or radiation, there is often damage, including pain, that lasts for the rest of an individual’s life. A damaged lymphatic system means that a person is much more susceptible to illness and injury as the lymphatic system ordinarily helps the body to heal faster and better. Very few, if any, studies in any type of cancers have examined the long-time results of node removal/lymph system damage with these harms in mind.

In a review published in May 2015, Cochrane researchers found that overall survival for participants with melanoma who underwent sentinel lymph node biopsy (SLNB) had no improvement in overall survival. However, recurrence of the melanoma at a distant site occurred more frequently in those participants in the SLNB group. 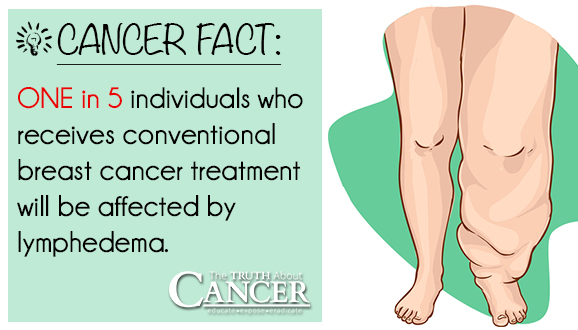 Imagine a skin burn where ordinarily the lymph cells rush to the area. In a sluggish lymphatic system − one that has sustained damage − there is no “rush” involved. The clogged or swollen area does not easily allow the appropriate immune cells to reach the affected area, and healing can take much longer.

People with leg or lower body lymphedema may find walking difficult or painful. Some people may not be able to pick up their children or grandchildren due to weakness and swelling in their arms. Over time, sensations in the areas may be reduced. Anyone who has had lymph nodes removed is at much higher risk of serious infections like cellulitis, which can lead to sepsis.

And lymphedema can occur at any time. There is no time limitation on the development of lymphedema (the swelling and visible sign of damage to the lymphatic system). And current treatments are only variations on temporary reduction in swelling.

If you have cancer, surgical removal of lymph nodes is a critical subject to discuss with your doctor. Many doctors do things because it’s common practice or standard of care, without examining further. But you are a unique individual and every cancer is different – you have to weigh your own risks and benefits.

Make sure you involve an alternative practitioner who specializes in cancer to find out what other options are available to you. Sometimes, it’s a good idea to take a step back and not rush into a decision. As an informed patient, it’s important that do your own research and be proactive in all your health care choices.

Ann Fonfa was diagnosed with breast cancer in January 1993. After a lumpectomy and refusing chemotherapy and radiation, she developed lymphedema and later on 24 more tumors, 14 of which were after a mastectomy. Ann then began to explore alternative therapies and used a variety of treatments including Chinese herbs to slow down her tumor growth. Happily, in 2001, Ann was finally diagnosed cancer-free. Ann has been on quite a journey and has a passion for helping people with cancer. She is the founder of the Annie Appleseed Project, a non-profit organization providing information on complementary and alternative cancer treatments.