You are here: Home / Featured Articles / The COVID Cookie is Crumbling 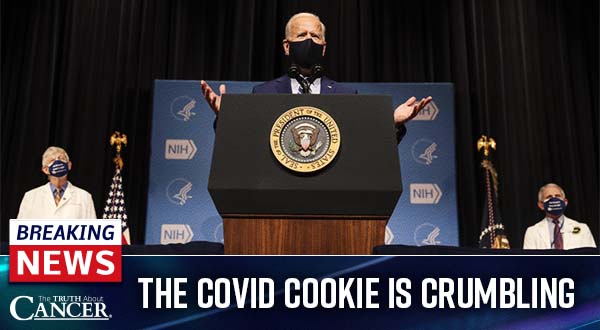 As the lies surrounding the COVID pandemic – and the government response – continue to be exposed, it seems that more and more people are abandoning ship. Last month, two of the FDA’s top vaccine officials resigned, citing anger over the Biden administration’s plan to roll out COVID-19 booster shots before officials had a chance to approve it.

Today, National Institutes of Health (NIH) Director Francis Collins announced his plans to resign after nearly three decades at the agency. The 71-year-old physician-geneticist led the agency under three consecutive presidents — making him the first presidentially appointed NIH director to serve in more than one administration and the longest-serving NIH director.

“I fundamentally believe… that no single person should serve in the position too long, and that it’s time to bring in a new scientist to lead the NIH into the future,” Collins said in a statement.

“Science sort of playing out in a very transparent way, looking at the data coming from multiple places, our country, other countries, and trying to make the best decision for right now,” he said.

Meanwhile, Project Veritas has released footage of Pfizer scientists admitting that immunity through exposure to the virus is better than the “vaccines” and have even called Pfizer “an evil corporation.”

Nick Karl, a scientist who is directly involved in the production of Pfizer’s COVID vaccine, said that natural immunity is more effective than the very vaccine he works on, and Pfizer produces.

“The city [of New York] needs like vax cards and everything. It’s just about making it so inconvenient for unvaccinated people to the point where they’re just like, ‘[expletive] it. I’ll get it.’ You know?”

Another Pfizer scientist, Rahul Khandke, admitted his company demands that its employees keep information from the public.

“We’re bred and taught to be like, ‘vaccine is safer than actually getting COVID.’ Honestly, we had to do so many seminars on this. You have no idea. Like, we have to sit there for hours and hours and listen to like — be like, ‘you cannot talk about this in public,’” Khandke said.

Khandke also signaled that proof of antibodies is on par with proof of vaccination.

“If you have [COVID] antibodies built up, you should be able to prove that you have those built up,” he said.

Chris Croce, a Senior Associate Scientist with Pfizer, said that people are more protected with natural antibodies than with vaccination. When asked why Pfizer had abandoned research on monoclonal antibodies, he replied:

“I still feel like I work for an evil corporation because it comes down to profits in the end. I mean, I’m there to help people, not to make millions and millions of dollars. So, I mean, that’s the moral dilemma,” Croce said.

Basically, our organization [Pfizer] is run on COVID money now.”

And he’s not wrong.

The Pfizer/BioNTech jab was developed and manufactured in large part thanks to a $445 million grant from Germany. The U.S. agreed to buy hundreds of millions of doses, with the first 100 million costing taxpayers a cool $2 BILLION.

Pfizer’s jab was subsequently granted Emergency Use Authorization in record time. In August, the FDA granted full approval, despite the fact that the double-blind, placebo-controlled study used to determine safety and efficacy was neither blind nor placebo-controlled.

Pfizer is one of the most popular stocks in Congress, with 48 lawmakers placing their bet on the drugmaker that hikes its prices each year. 47 lawmakers reported investing in Johnson & Johnson, despite the drugmaker’s abhorrent track record and active lawsuits regarding talc, opioids, and surgical mesh (among others).

Pharmaceutical companies are among lawmakers’ favorite stocks. As of the most recent financial disclosures, over 50 lawmakers reported investing upwards of six figures in the pharmaceutical and health products industry.

You may remember that, in January 2020, the Senate Committees on Health and Foreign Relations held a closed meeting with only Senators present to brief them about the COVID-19 outbreak and how it would affect the United States.

Following that private meeting, several senators bought and sold stocks worth millions of dollars based on information that was initially withheld from the public.

Facebook, which is currently battling both devastating claims from a whistleblower and site-wide shutdowns due to “programming errors,” removed thousands of profiles for promoting the theory that COVID originated from the Wuhan Institute of Virology. According to U.S. intelligence, this is now the prevailing theory.

We were told that the COVID shots could prevent us from spreading the disease, only to discover that the vaccinated can still contract and transmit the virus (AND carry higher viral loads).

We were told that hospitalizations and deaths were almost exclusively happening to the unvaccinated, only to learn that 60% of those hospitalized in Israel were fully vaccinated.

Once, we were told that the sun revolved around the earth.

Our leaders are not “following the science”; they’re following the money. Forced vaccination was always the end game both before and during this pandemic and the proof of that lies in the decades of federal legislation and federal agency rulemaking paving the way for what we are experiencing today.

This pandemic of deception and incompetence has stolen from our daily lives the peace and joy we deserve to have, leaving too many of us confused and paralyzed by fear, divided from our family and friends, crippled with anxiety and despair, allowing hopelessness to rule our days.

Former Virginia Governor Claude A. Swanson once said: “When the water reaches the upper level, follow the rats.”

We’re seeing an unprecedented exodus by even the most staunch vaccine supporters. FDA and NIH officials are resigning. Reputable doctors are leaving their hospitals. Military personnel are facing discharge rather than be coerced into medical experiments. Today, New York’s largest hospital system fired over 1,400 healthcare workers for refusing the Pfizer shot.

This plandemic is a sinking ship… just follow the rats.