You are here: Home / Cancer Prevention / How Glyphosate is Poisoning our Food Supply (video)

Video Transcript: How Glyphosate is Poisoning our Food Supply

Ty Bollinger: Statistics show that glyphosate is now applied to the tune of 300 million pounds annually, just on U.S. farms alone. By now you most likely know that glyphosate is bad for your health. Especially if you’ve been following our docu-series, A Global Quest, or our videos here on YouTube.

Charlene Bollinger: But, do you know exactly how glyphosate is poisoning our food supply? Watch this excerpt from GMO expert Jeffrey Smith at last year’s TTAC Live Event to learn more about the dangers of glyphosate when it comes to your health.

Jeffrey Smith: There’s also leaky gut. Now leaky gut, how many people have never heard of leaky gut? Okay, both of you. So, there are tight junctions along the intestinal walls, and food gets broken down into itsy-bitsy pieces, that’s a technical term. And then it gets absorbed in an appropriate manner into the bloodstream. But if you create a hole there, then undigested food proteins and part of the microbiome and chemicals get into the bloodstream where they’re not supposed to be.

So that causes inflammation and that can lead to cancer and the carcinogenic properties that—the aspects that are carcinogenic from inside the gut can end up getting through the leaky gut and causing cancer.

Now, glyphosate was originally patented to clean boilers and pipes. Because it’s a chelator, it grabs the minerals and strips them off the walls. It is the most powerful widespread chelator. All the different minerals, it grabs them and doesn’t let them go, and that’s what drives many of its properties. So, if it drives the property—if it takes the minerals from our food supply and makes them unavailable, that is a precursor to so many diseases.

We heard Dr. Quillin in the opening remarks of this conference, talk about nutrition and cancer. If you block the mineral absorption, like for example magnesium, you may have hell to pay if you’re focusing on—if you’re struggling with cancer. 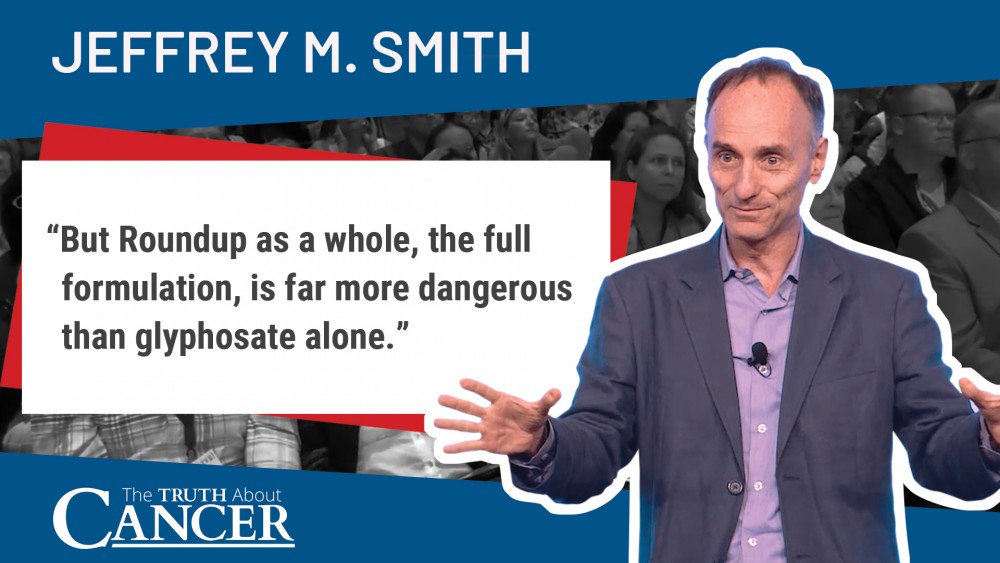 Now the last speaker and several other speakers, they talk about mitochondria. Otto Warburg talked about it, he’s a Nobel Prize winner, he describes cancer as a mitochondrial dysfunction. It turns out glyphosate is a mitochondrial toxin. There’s at least three studies showing that it damages the mitochondria.

It also blocks—because it blocks these minerals, the minerals allow certain pathways to occur. The cytochrome P450 pathway is very important to the body, it helps the liver detox. And so, if you’re not detoxing, then all the other toxins that are hanging around can cause problems, and it can create—it can oversee what can be tumor preventing or tumor causing. So, if you’re messing up the P450 cytochrome pathway, you’re in trouble.

It also messes up with shikimate pathway which produces the precursor to serotonin, melatonin, and dopamine. Which could influence—which could explain the influence of GMOs and glyphosate on mood and behavior and sleep.

Now our government has been in bed with the biotech industry. It’s a very big bed, there’s a lot of industries in there. And the EPA does not look at low dose effects of these chemicals. They don’t require any evaluation of really tiny amounts because they figure “Oh, it has to be high amounts that cause problems.” Their science is nearly two decades old. The amount of glyphosate, per body weight in these rats, that caused non-alcoholic fatty liver disease, actually it’s here, is 475,000 times less than the EPA allows in our drinking water, in our diets, on a per body weight basis.

Now in a paper by Samsel and Seneff, they list a whole bunch of other reasons why glyphosate might be causing cancer. I don’t think I need to go through any more details, okay? We’ve got a sense that there is a link.

Ty Bollinger: Thanks for watching, we hope you liked today’s video!