You are here: Home / Cancer Treatments / Why Having Good Medical Insurance Can Be Dangerous to Your Health (video) 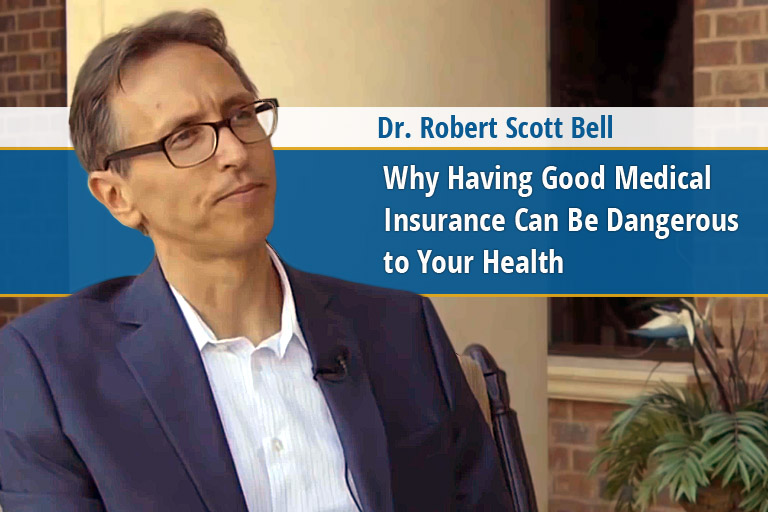 Video Transcript: Why Having Good Medical Insurance Can Be Dangerous to Your Health

Ty Bollinger: So Robert, here’s a couple of quotes I want you to talk about. First one, I’ve heard you say that “the most dangerous thing a person can have is good medical insurance.” What do you mean by that?

Dr. Robert Scott Bell: Well, it’s a funny thing to say and some people get offended when I say that because you know the biggest bulk of the American population, unfortunately we’ve been clamoring for affordable health care or affordable health insurance, which really nothing about the system supports health. It is, as you said, medical insurance.

It is covering management of disease; it’s not preventive of disease and if we were to look at the appropriate role for insurance it would be dealing with catastrophic unexpected scenarios. That is a legitimate role for insurance. Not the way it is utilized today as a third party intervener in the doctor-patient relationship.

And going back to the monopoly of medicine and the Flexner Report, they limit your choice of doctors – any kind you want as long as it’s allopathic, right? That’s like old Communist Russia or East Germany. You can have any color car you want as long as it’s black. It’s not much of a choice, but we’ve been convinced that we have to have a choice within the no choice scenario.

And so when we talk politically about whatever you want to call Obamacare, and it could have been Bushcare, it doesn’t matter to me. That it embraces an exclusivity and a monopoly and mandates your participation, and it is a corruption to begin with.

So, if I say the most dangerous thing you can have is good medical insurance, the reason is this. It’s because it guarantees the doctors will order every invasive test possible and give you access to every invasive medical procedure, drug… anything. And these things are deadly, deadly. And when you find out what really cures cancer and heals cancer, I mean, heck, just read Cancer – Step Outside the Box by this guy… who is this guy? Oh Ty, that’s you.

You’ll see that the reality is more people die of the treatment of that form of monopoly medical oncological treatment. And that if you did nothing, if you did nothing you would at the very least survive the same amount of time, but with a much higher quality of life and in most cases you may live far longer if you did nothing. Although there are some things, many things in fact that you can do, and that’s what we’re doing here, revealing at least some of those things that you can do. So yes, I believe as it is today the most dangerous thing you can have is good medical insurance.

This information is being suppressed from you by the mainstream media and the medical establishment. Please help us spread our message of truth and share this post so we can help more people be healthy and heal from cancer.

←
Previous
Cancer Cover-up? The Low Dose Chemotherapy Alternative Your Oncologist Isn’t Telling You About (video)
→
Next
The Health Supplement Ingredient That Could be Causing Cancer