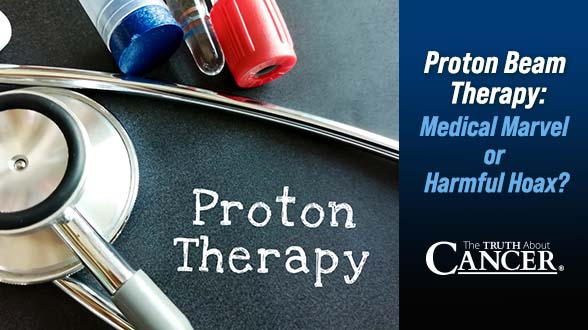 For decades, western medicine has given us the same 3 options for treating cancer: cut, burn, and poison. Doctors will almost always recommend the “Big Three,” insisting that patients undergo invasive surgery, toxic chemo, and damaging radiation treatments. Each of these can be fatal on their own, as we learned after my father was killed by a botched surgery.

Chemotherapy can also be dangerous, destroying the immune system and even creating new cancers in the body.

Chemotherapy destroys both malignant and healthy cells and can be even more lethal than the cancer itself. And radiation is no different.

What is Radiation Therapy?

As we’ve seen in places like Hiroshima and Chernobyl, radiation can be deadly. It permeates nearly all organic material and has been decisively shown to cause cancer. And like chemotherapy, radiation does not discriminate between cancer and healthy tissue. The damage resulting from radiation can be lethal, even resulting in secondary cancers.

The idea behind destroying cancer cells is not entirely without merit – but conventional treatments consistently create collateral damage to healthy cells. However, over the past 15 years we’ve seen a rise in the use of a new therapy that causes significantly less damage to healthy cells: proton beam therapy.

In 1895, German engineer Wilhelm Roentgen discovered X-rays, a type of electromagnetic radiation. He later won a Nobel Prize for his discovery, and the roentgen is now a measurement unit for the exposure to X-ray radiation. The more roentgen a person absorbed, the more likely they were to suffer lethal side effects.

This dangerous radiation is still in use today as a primary cancer intervention, and the risks are massive. To use an analogy, radiation exposure can be imagined like millions of tiny bullets. Depending on the dose and the level of exposure, these bullets tear through all material, including vital organs.

Why is Radiation Therapy Dangerous?

The radiation used in conventional cancer treatment employs high energy waves or particles to destroy the DNA of cancer cells. The problem is that these waves work like a 12-gauge shotgun. Imagine trying to shoot a target painted on a barn door. Except that next to the target and behind the door are your most valuable possessions. With a shotgun, it would be impossible to hit the target without destroying the valuables around it.

This is the major issue with radiation. The healthy tissue surrounding the cancerous cells is destroyed. Radiation waves also pass through the cancerous cells, continuing further into the body and wreaking havoc. This damage can lead to immune disorders, organ failure, and even new forms of cancer. Even if the targeted cells are destroyed, the collateral damage is catastrophic.

One of the primary risks of standard radiation therapy is skin damage. Like those exposed after the Chernobyl explosion, cancer patients can experience extensive and painful skin reactions. Other risks include fatigue, sexual dysfunction, nausea and vomiting, and more. The risk of developing a new cancer is perhaps the most frightening.

What is Proton Therapy?

Proton therapy, also known as proton beam therapy, is a form of radiation, but it is much different than the standard X-ray radiation used today in conventional treatment. This advanced technology uses particles with a positive charge, called protons, to more precisely target cancer cells. This allows effective destruction of cancerous tissue with minimal damage to the surrounding healthy tissue.

How Does Proton Therapy Work?

In the 1930s, a physicist named Earnest Lawrence discovered protons. Protons are positively charged particles found within every atom. In 1948, proton therapy was effectively used to destroy tumors in animals. Just 6 years later, the first humans were treated with proton therapy. With the development of modern imaging, proton therapy became an even more viable treatment option.

Proton therapy allows doctors to send higher doses of radiation into cancer cells without damaging the surrounding healthy tissue. Remember our barn door analogy? Imagine now that you’re using a poisoned arrow. As long as your aim is true, the arrow will not strike anything around it and will not pass through the barn door.

That’s how proton therapy works. The radiation is extremely precise, stopping upon impact with the cancer cells instead of passing through to the tissue behind it. This gives it an extreme advantage over conventional radiation therapy. The risk of side effects is substantially smaller with proton therapy, while the effectiveness is increased.

Perhaps most impressive is the reduced risk of secondary cancers. A 2015 paper published in Frontiers in Oncology found that proton therapy was less likely to result in secondary cancers than traditional radiation treatment. One of the biggest issues with the western approach to cancer is its short-sightedness. Success is measured by the 5-year survival rate. Catastrophic damage to the immune system and vital organs is considered normal. People die from cancer treatments while doctors congratulate themselves for eliminating the tumor.

By the mid-2000s, proton therapy was becoming increasingly accepted by major treatment centers, with M.D. Anderson Cancer Treatment Center adding a proton therapy program in 2006. A newer therapy, it is still relatively rare, and could be more expensive than traditional radiation. But given the lower risk, it seems that proton therapy is the future of radiation treatment.

There are many natural ways to help prevent, treat, and beat cancer. Many can be used complementary to conventional treatment if you choose that path, and even more can be used to help combat the nasty side effects of that treatment. And while we encourage everyone to explore things like diet, environmental toxins, and lifestyle choices for cancer prevention, we want you to have all the information you need to make the choice that’s best for you.

When it comes to radiation therapy, most doctors are essentially offering a “scorched earth” option. It’s like burning your house to the ground to deal with a pest infestation. This approach is counter-intuitive and causes more harm than good. But proton therapy is a different beast altogether.