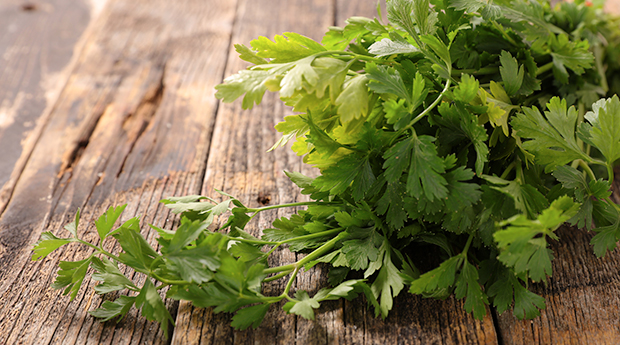 Parsley is so much more than a culinary tool that we use to season our food or add color to our plate. This common herb has powerful nutraceutical properties within its plant compounds that decrease our risk of numerous diseases − including cancer.

Studies reveal that the effects of parsley leaf and its stem extracts significantly reduce the ability of cancer cells to migrate and metastasize. When compared to 47 other fresh plants with cancer prevention properties, parsley was one of the top four herbs revealed to have the highest inhibitory effects on cancer-inducing inflammatory compounds (such as nitric oxide).

Parsley has been used for centuries to provide both culinary and medical benefits. It was even used by the Romans to eliminate odors from corpses before a funeral. Today it is a common deodorizer for body odor and is useful to freshen stinky breath by reducing bad bacteria. One of the best health attributes of parsley comes from its ability to reduce your risk of various types of cancer − including breast, colon, and lung cancer.

Parsley is a hardy, inexpensive herb that’s easy to grow and available in most grocery stores. If you’re not already consuming parsley on a regular basis, perhaps these health benefits of parsley will convince you to begin!

The antioxidant activity of parsley is evident in thousands of studies relating the ability of compounds found in parsley to cancer prevention. Parsley contains the following flavonoids and phenolic compounds with a range of nutraceutical effects:

FRAP (ferric reducing ability power) is a common test performed in humans to measure the antioxidant potential of plant polyphenols such as those listed above. This test measures the reactivity of free radicals to create oxidative stress and injury to normal biological functions.

A known risk factor for cancer is elevated levels of uric acid in the blood. Abnormal levels of this chemical can lead to problems like gout and left untreated produces stress on the body leading to chronic disease. Its presence is associated with the generation of cancer-promoting reactive oxygen species (ROS).

Parsley exhibits uric acid lowering effects by inhibiting the production of liver xanthine oxidoreductase. This liver enzyme is the main contributor that metabolizes compounds to produce uric acid. The reduction of ROS and the inhibitory effects produced by parsley are reported to decrease trauma associated with the need for a liver transplant.

In the country of Turkey, parsley is used regularly as a treatment for diabetes due to its liver supporting properties. With its high antioxidant capacity, parsley is an effective herb to flush toxins from the liver while also reducing blood sugar and sodium levels, uric acid concentrations, and oxidized liver enzymes that produce tissue damage in diabetics.

Bitter is Good for the Liver

Natural bitters are deficient in the modern diet but provide a host of nutritional value in foods like parsley, basil, and chicory root. Eating bitter foods daily contributes to the support of digestive health in part due to its role in liver support. Bitter foods increase levels of the master antioxidant glutathione in the liver and also support other antioxidant enzymes. Parsley has even been shown to regenerate liver tissue following damage due to chronic diseases.

Parsley stimulates the production of bile in the liver required for digesting fats in the intestines. A deficiency in bile production contributes to poor digestion, microbial overgrowth, and hormonal disturbances. Bile production is also essential to the excretion of toxins that are being flushed from the body and liver.

Enhancing natural detoxification pathways is essential to preventing the accumulation of cancer causing agents in the body and is essential to human health. Parsley is loaded with chlorophyll, which gives its characteristic green color. Chlorophyll is a known chelating agent found to remove toxic metals from the body and stimulate biological activity that eliminates waste build-up.

We are exposed to many heavy metals, such as cadmium, in the environment around us and the foods we eat. Cadmium interferes with hormone function and reduces the ability of immune-stimulating nutrients like zinc and magnesium. It also disturbs vital organs and the function of the brain, liver, kidney, and testes. Parsley has been shown to inhibit these toxic effects of cadmium by supporting overall detoxification systems.

A diet containing even low doses of chlorophyll is shown to aid in the formation of new red blood cells, detoxify harmful compounds from the blood, and regulate blood pH critical to reducing the risk of cancer development.

Compounds such as chlorophyll present in parsley have been shown to lower hydrogen peroxide levels, reduce free radicals, and increase enzymes like glutathione peroxidase that actually filter out hydrogen peroxide from plasma.

Other antioxidant enzymes including SOD (superoxide dismutase) and glutathione reductase have been shown to increase in individual’s blood levels following the consumption of parsley. Over a short two week period, oxidative stress in the individuals continued to decrease continually.

Parsley has anti-inflammatory properties that can reduce your risk of cancers of the digestive, urinary tract, cardiovascular system, brain, and other regions. Its potent antioxidant compounds act on local and distant tissue and are used in the treatment of diabetes, bacterial and fungal infection, and in regulating blood pressure.

How to Juice Parsley for Better Health

Parsley promotes health in numerous ways and is helpful to anyone looking to optimize their health and reduce their risk of cancer and other chronic diseases.

Its powerful anti-inflammatory and antioxidant properties improve respiratory problems and boost circulation. It also detoxifies the body’s organs and tissue so that they can function optimally, and supports the effective elimination of carcinogens.

The four recipes below contain detoxifying fruits and vegetables to pair with parsley that support natural detoxification pathways and enhance healing. As with any healthy diet, always juice organic produce when available. Freshly prepare juice rather than creating large batches susceptible to light and temperature oxidation − which damages its potent anti-carcinogenic compounds.

Were you aware of all the health benefits of parsley? Do you eat it? How do you use it? Please share your favorite ways in the Comments section below.


Want to learn how to use nature’s medicine chest? Experts reveal over 140 natural ways to fight disease in our latest documentary.