My preferred way of cooking meat is just on a good stainless steel pain, lots of coconut oil. I load up on the oil in there. The coconut oil will protect the meat. So I put that in there and I’m very generous with the oil because, again, we want a lot of these good fats and then I cook the meat in that. And I just cook it till it just lightly browned and that’s good.

Now if you are going to do the grill, okay, an outside grill, you’re going to do charcoal, things like that, you would certainly want to make sure you marinate it. And you can marinate in things like extra virgin olive oil, lemon, fresh squeezed lemon, and the lemon and the olive provide an antioxidant defense to help protect the meat from producing a lot of free radicals when you cook it. And again, just don’t let it smoke, don’t let it burn. Try to pull it off there a little quicker and you’re going to do a lot better with that.

Ty Bollinger: Great information on the coconut oil too. One of the things that we do as a family if the kids want something fried, we’ll fry it in coconut oil.

Ty Bollinger: You know, some organic flour on the chicken or whatever, dip it in the coconut oil and it tastes great.

Ty Bollinger: But it’s actually healthy. You can actually eat a fried food that is healthy for you… 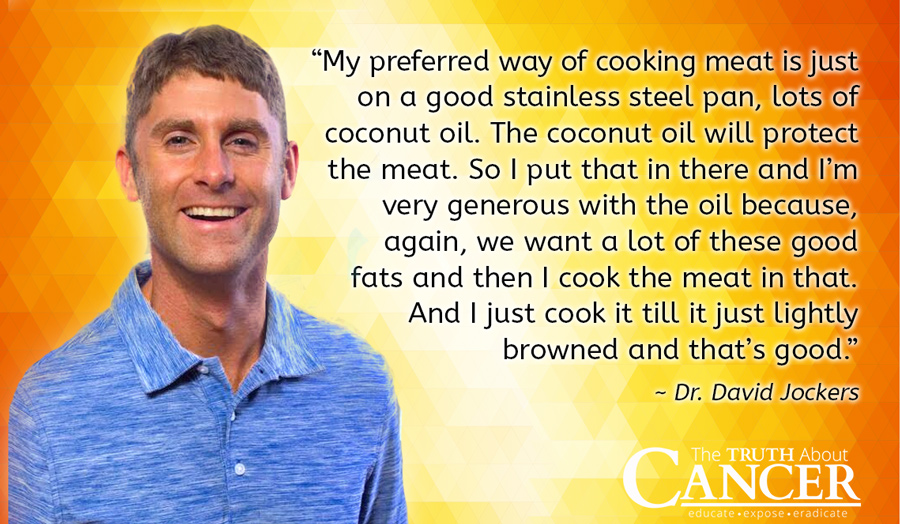 Dr. David Jockers: Well again, it’s really a combination of things. Typically when you go and you get some sort of fried food − French fries, fried chicken − it’s going to be fried in a high omega-6 vegetable oil. Basically it’s going to create a trans fat because they take these polyunsaturated fats and they cook them at a high temperature. And these poly unsaturated fats can’t handle that. So they’re taking things like corn oil and soybean oil which are typically genetically modified as well. So you’ve got problems there.

But then they cook them at a really high temperature and they convert to trans fat. And so it’s just basically typical fried foods that you find in America are loaded, saturated with trans fatty acids which are extremely toxic and destructive in the body. So we definitely want to avoid that.

On top of that, they’re usually using the wrong type of batter so they’ve got a lot of gluten in there and genetically modified ingredients in whatever their batter is that they’re using with the chicken and the French fries. And of course, typically a chicken’s commercially raised and—so you got a whole bunch of problems right from the start.

Now if you were to take a pasture raised chicken that was raised properly, it’s going to, again, concentrate omega-3 fats, it’s going to have a lot more antioxidants in all of its cells, in all of its tissue. So now you’ve got a properly raised animal. Now you use something like coconut flour, which is gluten-free, low carb, good fibers, and you put that in there and then you deep fry it in coconut oil. You’re going to have a lot less problems with that. It’s going to be a lot better for the body. So that’s the way to do it.

Ty Bollinger: I think I’m going to have to go right now because I’m getting kind of hungry because it’s amazing the way—and again, the key is to use the proper ingredients.

←
Previous
3 Smoothie Recipes Featuring Citrus Essential Oils
→
Next
Are You Magnesium Deficient? How to Know & What to Do About It