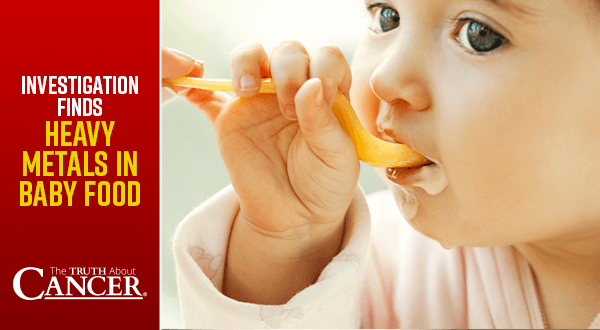 Representative Raja Krishnamoorthi, who chairs the house Subcommittee on Economic and Consumer Policy within the Committee on Oversight and Reform, said that “these manufacturers knowingly sell baby food containing high levels of toxic heavy metals… It’s time that we develop much better standards for the sake of future generations.”

The manufacturers guilty of poisoning our children include some big names. The 7 companies investigated were:

The heavy metal contaminants found in the baby food are among the most dangerous, and include:

Unfortunately, the companies under investigation were largely uncooperative, and have categorically denied wrongdoing so far.

Nurture Inc., which makes Happy Baby, said it only sells products that have been rigorously tested and don’t have contaminant ranges outside the FDA guidelines. “We can say with the utmost confidence that all Happy Family Organics products are safe for babies and toddlers to enjoy,” said a spokesperson. But the investigators found that over 25% of the Happy Baby products that the company tested contained over 100 parts per billion of inorganic arsenic.

Beech-Nut Nutrition Corp. said it tests each delivery of ingredients, including fruits, vegetables and rice, for up to 255 contaminants to ensure they meet internal quality standards. But investigators found that Beech-Nut tested and used 57 ingredients, such as cinnamon and sweet potatoes, that contained over 20 parts per billion of lead.

Other companies refused to cooperate with the investigation, blocking the committee from properly testing their products. Walmart (Parent’s Choice), Sprout Organic Foods, and Campbell (Plum Organics) all tested positive for “concerning levels of toxic heavy metals” in independent testing. The investigators said they were “greatly concerned that their lack of cooperation might obscure the presence of even higher levels of toxic heavy metals in their baby food products, compared to their competitors’ products

Poisoned Babies: By the Numbers

The following is a breakdown if the specific toxic metals found in each brand and the maximum levels of each toxin:

Experts agreed that the presence of these toxic heavy metals is a major issue. “This is an endemic problem that’s been swept under the rug and never addressed,” said Tracey Woodruff, director of the program on reproductive health and the environment at the University of California. “It speaks to the many areas that we need [the] government to be active in,” she added. “Consumers can’t figure it out on their own.”

“These numbers are striking,” said Sung Kyun Park, co-director of the University of Michigan’s occupational epidemiology program. “If children are getting served this every day, the cumulative effects could be substantial.”

Rui Hai Liu, professor of food science at Cornell University, is conducting research for the Baby Food Council, a coalition the industry formed two years ago to work on reducing contamination. “These naturally occurring contaminants present in vegetables and fruits can be especially harmful to young children in terms of their organ development and neurological development,” he said.

And while it’s true that trace amounts of heavy metals can be present organically in some soil, many of these products tested positive for inorganic heavy metals, likely resulting from reckless agricultural practices and additives used to increase margins and make products more marketable.

The fact that babies are small, have other developing organ systems, and absorb more of the heavy metals than adults, exacerbates their risk from exposure to heavy metals.

Exposure to heavy metals at this developmental stage can lead to untreatable and frequently permanent brain damage, which may result in reduced intelligence, as expressed in terms of lost IQ points, or disruption in behavior.

The Agency for Toxic Substances and Disease Registry (ATSDR) has ranked known toxic substances based on the threat they pose to human health. Here’s where each of the toxins present in baby food rank, and some of the primary health risks:

The known health risks of arsenic exposure include respiratory, gastrointestinal, hematological, hepatic, renal, skin, neurological and immunological effects, as well as damaging effects on the central nervous system and cognitive development in children.

Studies have concluded that arsenic exposure has a significant negative effect on neurodevelopment in children. This negative effect is most pronounced in Full Scale IQ, and more specifically, in verbal and performance domains as well as memory. For every 50% increase in arsenic levels, there is an approximately 0.4 decrease in the IQ of children.

A study of Maine schoolchildren exposed to arsenic in drinking water found that children exposed to water with an arsenic concentration level greater than 5 parts per billion showed significant reductions in full scale IQ, working memory, perceptual reasoning, and verbal comprehension scores. The authors pegged 5 ppb as an important threshold.

Likewise, a study of children in Spain found that increasing arsenic exposure led to a decrease in the children’s global motor, gross motor, and fine motor function scores. Boys in particular were more susceptible to arsenic’s neurotoxicity.

Even small doses of lead exposure are hazardous, particularly to children. Lead is associated with a range of bad health outcomes, including behavioral problems, decreased cognitive performance, delayed puberty, and reduced postnatal growth. According to FDA, lead is especially dangerous to infants and young children.

The FDA acknowledges that: “High levels of lead exposure can seriously harm children’s health and development, specifically the brain and nervous system. Neurological effects from high levels of lead exposure during early childhood include learning disabilities, behavior difficulties, and lowered IQ. Because lead can accumulate in the body, even low-level chronic exposure can be hazardous over time.”

Studies of mercury’s effect on childhood development have primarily been conducted by considering the mother’s exposure to mercury while pregnant. In these instances, prenatal mercury exposure has been consistently associated with adverse subsequent neuro-development.

A 2018 study linked cadmium exposure to ADHD, finding that the disorder was more common among children with the highest levels of cadmium exposure as compared to a control group. Most importantly, cadmium is an established human and animal carcinogen. Studies show that cadmium increases risk for lung, kidney, breast, and prostate cancers.

As usual, we’ve learned that these companies don’t give a rodent’s hindparts about consumer safety. The food that they market to our young children is laden with some of the most toxic elements on earth, and the response from the corporate world is that their “standards” are better than anyone else.

To learn more about the health risks of these heavy metals, check out these clips from Mike Adams’ presentation at TTAC LIVE! 2017.

Heavy Metal Poisoning: Are You at Risk?

Corporate greed and a lack of accountability have allowed these companies to go unchecked as they literally poison our babies. It is our mission to provide the best information for you to protect your family. Our children are precious and most in need of protection. If we don’t look out for them, it seems no one will.

←
Previous
The Healing Benefits of Aromatherapy for Cancer Patients
→
Next
Statement from Ty and Charlene Bollinger: Rebuttal to Fake News CNN’s Hatchet Job