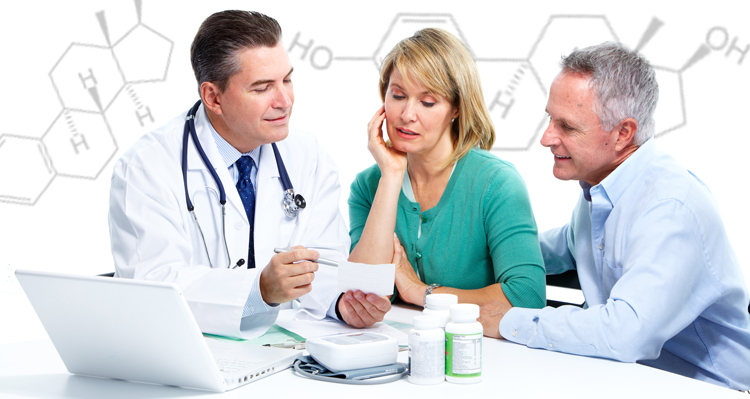 At some point every woman faces the inevitable onset of menopause and all that this aging rite of passage entails. And if you’re approaching or already in this stage of womanhood yourself, you’ve probably heard a thing or two about hormone replacement therapy (HRT). HRT can provide relief from many of the most common postmenopausal symptoms, including night sweats, hot flashes, weight gain, irritability, and osteoporosis.

As women grow older, their bodies produce increasingly fewer sex hormones, which are necessary for sustaining optimal physiological function and health. Without these hormones, women’s bodies lose their youthfulness and begin to break down. Hence the potential need for hormone replacement therapy to minimize this loss in vitality.

However, depending on who you talk to, HRT is either a godsend or a curse for the long-term health and well-being of menopausal women. The reason for this is that there is a lot of confusion out there about HRT. Many women aren’t being told by their doctors that there are two types of hormone treatments available to them: natural bioidentical HRT, and synthetic drug-based HRT.

One serves as a safe and effective way for menopausal women to feel younger while reducing their risk of heart disease and breast cancer. The other actually elevates women’s risk of chronic illness later in life. Unfortunately this distinction is hardly ever addressed publicly. Conventional medicine seems to reject the preferable option of bioidentical HRT, or at the very least lumps it into the same category as synthetic HRT in terms of its risks.

The truth is that bioidentical hormones are safer and more effective because they are exact replicas of the hormones that a woman’s body produces naturally during her younger years. Synthetic hormones, on the other hand, are structurally and actively different from women’s natural hormones. This is why the body treats them as foreign invaders.

Understanding the difference between the two is important because HRT often gets a bad rap in the media. Many mainstream doctors claim that the extended use of HRT increases women’s risk of breast cancer, heart disease, atherosclerosis (artery hardening), and more. And this claim is valid if we’re talking about synthetic HRT drugs like Premarin, Prempro, and Provera, the three most popular HRT drugs on the market today. 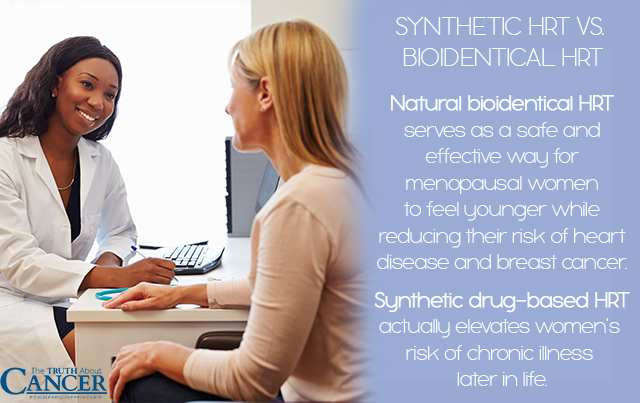 But bioidentical hormones don’t present these same risks because they’re compositionally equivalent to natural female hormones, which are responsible for energy production, weight regulation, brain function, and so much more. Bioidentical hormones can also help reduce women’s risk of breast cancer and other health conditions.

Synthetic HRT drugs have been shown to have the opposite effect, which is why they have become the subject of controversy in recent years. Women who take synthetic HRT are at elevated risk for having a heart attack or stroke, and studies have shown that these medications actually promote the growth of breast cancer cells.

One of the negative effects of menopause is the dramatic decline in progesterone. Progesterone is a “master” female hormone that serves as a precursor to other female sex hormones like estrone, estradiol, and estriol. Each of these hormones falls into the general estrogen category, yet actually serves a unique biological function in women’s health. Of note for this discussion, estriol is a “weaker” estrogen that does not cause cell proliferation, and can actually be cancer protective as it balances the cell proliferation effects of estrone and estradiol.

This loss in progesterone is why many women entering menopause suffer from mood swings and premenstrual symptoms (PMS). But progesterone is also responsible for maintaining bone health and protecting against cancer, including both endometrial and breast cancers. It also helps in modulating brain chemistry, normalizing blood clotting, and regulating thyroid function.

Progesterone is the key “nutrient” that women’s bodies need to stay healthy. Yet the natural form of it is nowhere to be found in the Food and Drug Administration (FDA) approved lineup of HRT drugs. Provera (medroxyprogesterone acetate) and Premarin (a combination of estrogen hormones derived from horses), two of the leading HRT drugs commercially available, mimic some of the effects of progesterone, but they aren’t actually progesterone.

Studies have shown that these progesterone imitators lack many of the benefits of the real thing, and can actually exacerbate the symptoms of menopause over time. At least 13 studies reveal that non-bioidentical HRT drugs like progestin (medroxyprogesterone), a synthetic version of progesterone, work against women’s bodies by elevating their risk of breast cancer. And the medroxyprogesterone can actually make those cancers more aggressive and deadlier.

The well-publicized Women’s Health Initiative study evaluating the effects of synthetic HRT drugs like progestin actually had to be terminated early due to the fact that these chemicals were failing to protect women against heart disease, while increasing their risk of heart attack and cancer!

Natural progesterone, on the other hand, has the opposite effect. Studies have confirmed that bioidentical progesterone greatly reduces women’s risk of developing breast cancer. This is because natural progesterone acts as an antagonist to estrogen. Estrogen causes cancer cells to rapidly grow and not die, whereas progesterone causes cell reproduction to cease, and cells to die (apoptosis).

One study published in the journal Breast Cancer Research and Treatment, followed more than 80,000 postmenopausal women using different forms of HRT for more than eight years. Researchers found that women who used estrogen in conjunction with bioidentical progesterone did not experience an increased risk of breast cancer and actually saw a decrease in risk (again, this is due to the balancing effects of estrogen and progesterone). 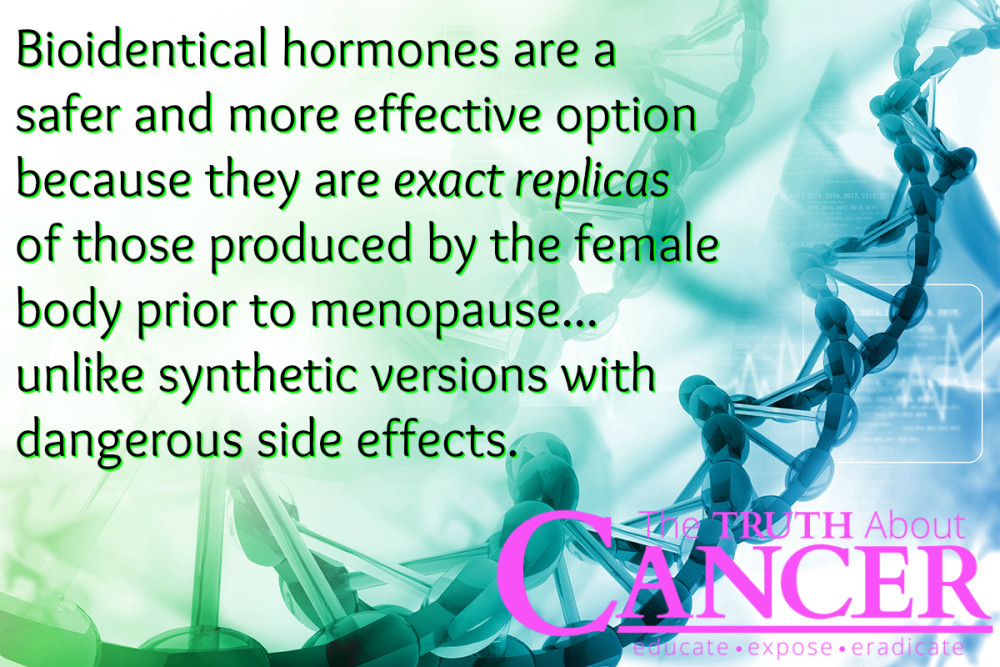 Other studies have come to similar conclusions with regards to cardiovascular health, brain health, and other forms of cancer − natural progesterone and estrogen, and bioidentical hormones at large, tend to reduce women’s risk of disease while minimizing the negative effects of aging. Synthetic HRT drugs, in contrast, increase the risk of disease. Non-bioidentical progestin is not only not protective, it significantly increases estrogen-stimulated breast cell replication and growth.

“A thorough review of the medical literature clearly supports the claim that bioidentical hormones have some distinctly different, often opposite, physiological effects to those of their synthetic [non-bioidentical counterpart] hormones,” says Dr. Kent Holtorf, MD, an expert in anti-aging medicine and bioidentical hormones.

“With respect to the risk for breast cancer, heart disease, heart attack, and stroke, substantial scientific and medical evidence demonstrates that bioidentical hormones are safer and more efficacious forms of HRT than commonly used synthetic versions.”

Just to be clear… while bioidenticals are a helpful tool to balance hormones, they do not correct the reasons for imbalance. Stress and other lifestyle issues impair the hormone progesterone and raise estrogen.

Thus while taking bioidentical hormones will bring relief from symptoms and can be cancer protective, addressing the cause is always a good idea. Reducing stress and increasing intake of vitamins B6, C, and E, resveratrol, selenium, and garden herbs such as sage and oregano can help boost the production of progesterone. Flaxseed, pumpkin seed, green tea, and button mushrooms help naturally curtail the production of aromatase, the pre-cursor to estrogen.