You are here: Home / Cancer Treatments / The Healing Benefits of Hyperbaric Oxygen Therapy 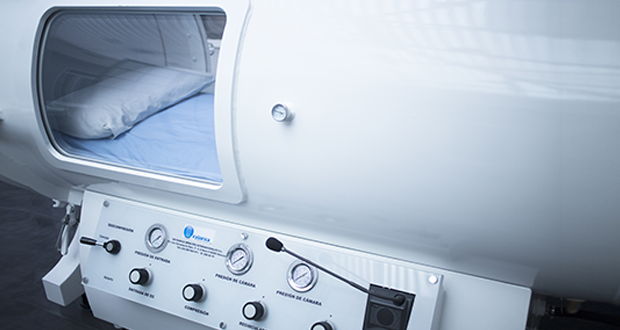 We know that oxygen is essential to normal cellular physiology. Cancer cells have an altered metabolism and no longer depend upon oxygen. In fact, high oxygenated environments are toxic to cancer cells and both slows their growth and triggers cell death mechanisms within them. Is there a way to increase oxygen in the body to support healthy cell function while being a detriment to cancer cell function?

Our bodies rely on the constant supply of oxygen intake to survive. Our atmosphere is approximately 21% oxygen. This element is required by every cell in the human body to produce cellular energy via the mitochondria. High flow oxygen therapy can deliver 100% oxygen in a pressurized atmosphere and results in extraordinary healing benefits.

When oxygen is administered at high pressure rates, up to 20 times more oxygen can be absorbed by the bloodstream. This oxygen is transported to damaged organs and tissue which speeds up both healing and recovery time. Hyperbaric oxygen therapy delivers pure oxygen up to 3 times the normal atmospheric pressure. Sessions typically ranges from 30 to 90 minutes.

What is Hyperbaric Oxygen Therapy?

Hyperbaric oxygen therapy (HBOT) refers to breathing in conditions of 100% pure oxygen under high pressure. This process encourages oxygen to be quickly absorbed and dissolved into the bloodstream at an expedited rate. Infection can slow healing because the blood supply to the affected site is damaged. HBOT increases the oxygen supply to these damaged tissues.

This form of hyperbaric therapy which utilizes 100% of oxygen requires a prescription under FDA guidelines due to its classification as a drug. Mild hyperbaric therapy or mHBOT has also shown significant health benefits and administers 95% oxygen in a small range of 1.3 to 1.4 atmospheric pressure. Requiring no doctor’s prescription, providing incredible health benefits and a process that has minimal to zero risks, mHBOT is a much more affordable treatment option.

Systems range in cost from as low as $5 to $25,000. You can also get treatments at around $50 to $100 a session. HBOT that provide more than 1.5 times the atmospheric pressure and administers 100% oxygen are about $200 per treatment session.

HBOT can benefit any patient who is healing from a condition triggered by inflammation in the body. The healing process can be improved using HBOT to deliver a higher rate of oxygen to damaged tissue. In fact, oxygen controls more than 8,000 genes and is one of the most natural forms of antibiotics. Twenty sessions of therapy improves the function of stem cells by eightfold.

HBOT has also been shown to help with the following: 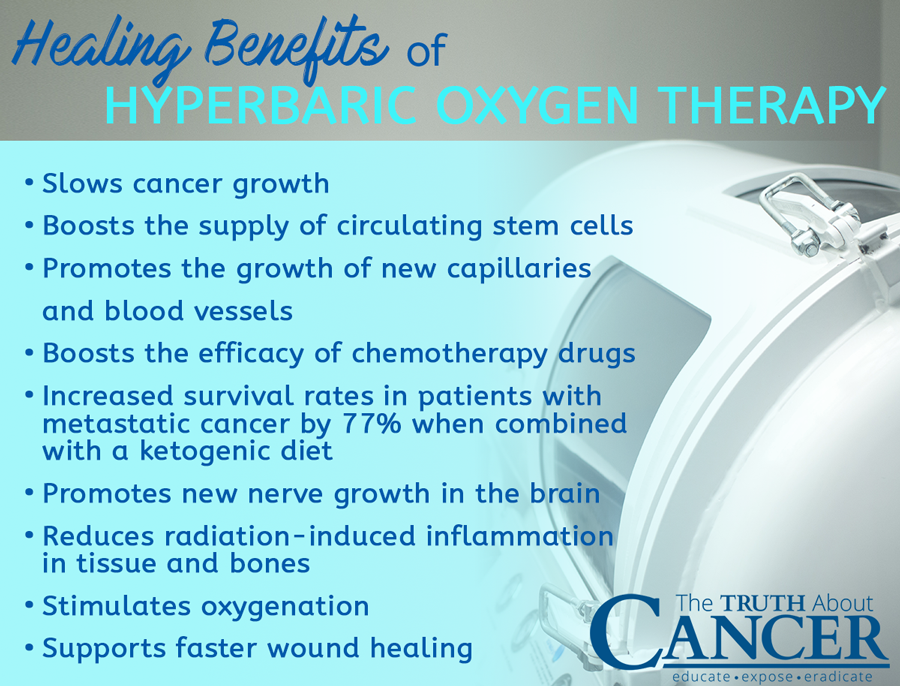 Individuals with autism who receive HBOT treatments have also been suggested to benefit. One 2009 study found that kids with autism who received HBOT treatment for 40 hourly sessions had significant improvements in their symptoms. Out of 62 children, half received slightly pressurized air at 1.03 atm (atmosphere) and the other half received mHOBT at 1.3 atm. Following the experiment, those children that received hyperbaric treatment had improved cognitive and sensory awareness, social skills, eye contact, receptive language, and overall improved functioning.

HBOT is often used as a complementary therapy for cancer patients undergoing radiation treatment. It reduces the inflammation in tissue and bones adjacent to the site where the radiotherapy produces excessive reactive oxygen species. HBOT also helps to heal and regenerate blood vessels that have been damaged through radiation treatment.

Otto Warburg was a world renowned cell biologist and cancer researcher. He discovered that cancer cells exhibit an abnormal metabolism and cannot thrive during cellular respiration (oxygen involving). The organelles which drive this cellular function are the mitochondria which produce cellular energy. Healthy mitochondria use oxygen in a process called aerobic metabolism to produce energy in what is called the Krebs Cycle.

Cancer cells instead rely on a process known as glucose fermentation produced from substrate level phosphorylation. Researcher Dr. Thomas Seyfried found that cancer cells have the capacity to produce energy from both glucose and amino acid fermentation using the amino acid glutamine. Neither of these processes use oxygen and are considered anaerobic.

The Ketogenic Diet and HBOT

Physicians Advocating the Use of Hyperbaric Oxygen Treatment

Rhett Bergeron, MD, from Real Health Medical has stated that:

I utilize Hyperbaric Therapy in all stages of cancer; upon detection, as well as pre and post-surgery, pre, post and during chemo and radiation. In fact if chemotherapy is used in conjunction with mHBT, the chemotherapy dose must be reduced. The HBOT will potentate any primary cancer treatment. HBOT is the best cancer prevention and cancer remission therapy out there, bar none.”

“By increasing the oxygen environment to the cancer cells, it makes them less virulent and in many instances destroys them.” – Pavel I.Yutsis, MD, Oxygen to the Rescue

“A ketogenic diet and HBOT produce significant anti-cancer effects when combined in a natural model of systemic metastatic cancer. Our evidence that these therapies should be investigated as potential non-toxic treatments or adjuvant therapies (complementary therapies).” – Dr. Thomas Seyfried

“For the subset of patients who suffer from late effects of radiation exposure, hyperbaric oxygen therapy is often the only treatment than can prevent irreversible bone or tissue loss or enable them to undergo life-improving reconstructive procedures such as breast or facial surgeries. By offering this therapy, we are able to provide a better quality of life to patients who have already survived devastating illnesses.” – Susan Sprau, MD, Medical Director of UCLA Hyperbaric Medicine

When used alongside other conventional cancer treatments, HBOT can benefit in the following ways:

Most patients will not generally experience symptoms and are able to return to work immediately. Other patients may experience temporary changes in vision once they have completed 20 sessions or more. If you experience high fever, have untreated air or gas in the pleural space of the lung, or have an untreated seizure disorder you should not use hyperbaric oxygen therapy. Consult your doctor if you are pregnant.

←
Previous
What are the Causes of Cancer? (video)
→
Next
Can Hot Foods and Drinks Cause Esophageal Cancer?