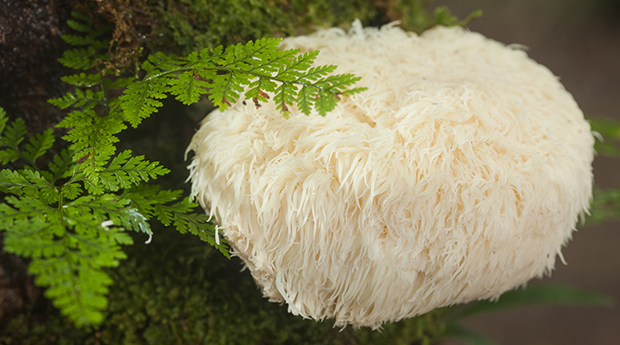 Mushrooms have long been revered within many traditional societies, both for being nutritional powerhouses and for their potent health benefits. Found growing naturally on dying and dead trees in Europe, North America, China, and Japan, Hericium erinaceus – also known as Lion’s Mane mushroom – is an edible fungus with a long history of use in traditional Chinese medicine (TCM) for many stomach ailments, including stomach and gut cancer.

Once reserved for the refined palates of royal families, this nutritious mushroom is made up of 20% protein. It is considered to be a gourmet dish when prepared properly, with a chewy texture and taste similar to lobster and shrimp.

However, it’s not just traditionalists who are excited about this mushroom’s benefits for our health. According to Paul Stamets, author and a prominent advocate of medicinal mushrooms, Lion’s Mane may be the first “smart” mushroom known to man. Lion’s Mane mushroom is considered safe and edible with supportive properties against many different types of cancer, along with clear benefits for the brain and nervous system.

Research into the Health Benefits of Hericium erinaceus

Lion’s Mane has recently been the focus of many studies examining the medicinal properties of its bioactive compounds, including protein-bound polysaccharides – which are complex carbohydrates in which a number of sugar molecules are bound together – and many others.

In fact, early clinical trials with one type of polysaccharide found in Lion’s Mane known as beta glucans show that they have an immune-strengthening effect while being perfectly safe to consume, with minimal or zero side effects. This is potentially of great benefit to cancer patients, whose immune system is typically weakened both by their disease and by toxic anticancer therapies such as chemotherapy and radiation therapy.

Lion’s Mane has also been credited with protecting and promoting healthy nerve cells in the brain and nervous system (known as neurons), along with boosting mood and concentration.

But first, let’s take a closer look at its anticancer properties…

In a promising 2011 laboratory study, extracts from Lion’s Mane were seen to reduce the weights of transplanted colon tumors in mice – while simultaneously doubling the numbers of natural killer (NK) cells, increasing macrophage activation, and reducing the number of blood vessels inside the tumors by half.

Angiogenesis – the process by which new blood vessels form from old ones – is essential for tumors to become malignant. Unlike so-called “benign” tumors, malignant tumors are no longer self-limited in their growth, are capable of invading into nearby tissues and organs, and may even be able to spread to distant tissues, which is known as metastasis and is invariably fatal. Reducing the number of blood vessels inside tumors is known to prevent their malignancy.

Various compounds and extracts from Lion’s Mane have been shown in studies to be toxic to cancer cells in culture – including stomach cancer, colon cancer, and liver cancer – and block their rapid growth, known as proliferation.

Further, when these cancer cells were transplanted into mice, Lion’s Mane extracts were seen to attack the resulting tumors without causing any toxicity to the mice. In fact, the study researchers noted that these extracts were more potent and less toxic than 5-flourouracil (5-FU), a standard chemotherapeutic agent that is commonly used to treat many different types of cancer.

Similarly, Lion’s Mane extracts have been shown to induce programmed cell suicide (known as “apoptosis”) in leukemia cells in culture. In a 2015 study, a novel protein-bound polysaccharide purified from Lion’s Mane was shown to significantly block the rapid growth of stomach cancer cells in culture by triggering both apoptosis and cell cycle arrest.

Lion’s Mane extracts have also been shown to block the ability of cancer cells to metastasize, or migrate to other areas. For instance, in a 2013 study, one such extract prevented colon carcinoma cells from migrating to the lungs.

Lion’s Mane has also been shown to enhance apoptosis induced by doxorubicin in an aggressive type of liver cancer known as drug-resistant hepatocellular carcinoma. Doxorubicin is a standard chemotherapeutic agent used to treat many different types of cancers. 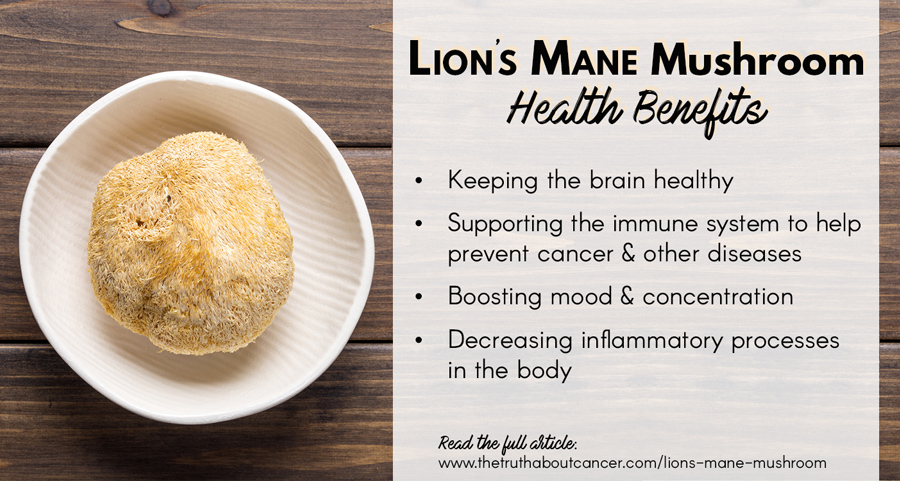 #1. Keeping the brain healthy. Bioactive compounds known as hericenones and erinacines in Lion’s Mane have been shown to activate a protein peptide in our bodies known as “nerve growth factor,” or NGF. NGF is critically necessary for the growth, maintenance, and survival of nerve cells in our brain and nervous system, known as neurons.

Health experts believe that this ability of Lion’s Mane to protect, heal, and regenerate nerve cells will one day make it very useful for the treatment of Alzheimer’s disease, muscular dystrophy, senility, Parkinson’s disease, and other neurological conditions.

#2. Supporting memory and cognition. In laboratory experiments, Lion’s Mane was seen to prevent damage to short-term and visual recognition memory. Short-term memory is our ability to keep a small amount of information in our minds in an active, readily available state for a short period of time. Visual recognition memory is our ability to recognize previously encountered events, objects, or people, to “remember” them.

Both of these types of memories are specifically lost in people with Alzheimer’s disease and other dementias. These results suggest that with further research Lion’s Mane may be used to slow down – and perhaps even prevent – these memory deficits from happening at all.

Indeed, in a double-blind, parallel-group, placebo-controlled trial, Lion’s Mane consumption was seen to improve brain power scores in elderly Japanese men and women who had been diagnosed with mild cognitive impairment (MCI). MCI can involve problems with memory, language, thinking, and judgment. It is considered to be an intermediate stage between the normal mental decline seen with aging and the more serious brain function deficits seen in dementias, such as Alzheimer’s disease

#3. Boosting mood & concentration – Lion’s Mane also makes us feel good by reducing our levels of anxiety and depression and improving our ability to concentrate. In fact, Asian Buddhist monks are known to consume Lion’s Mane tea before meditation to enhance their powers of concentration. In other words, Lion’s Mane can help support our mental agility, mood, and concentration as we age.

Editor’s note: This post was originally published in March 2017. It has been updated and republished in November 2019.

←
Previous
The Tremendous Benefits of Turmeric for Cancer Treatment
→
Next
Could You Benefit from Ayurvedic Medicine for Cancer?