You are here: Home / Cancer Treatments / Can These Common Medical Tests & Treatments Give You Cancer? (video)

Video Transcript: Can These Common Medical Tests & Treatments Give You Cancer?

Ty Bollinger: So you hear all month this month, it’s breast cancer awareness month, about early detection. You’re saying they should be using thermography instead of mammography. It’s a better early detection technique. Why, in your opinion, are they not using it if it works so much better?

Dr. Ben Johnson: You know there are things that you just want to shoot yourself over that the medical—standard medicine does not do. I’m not much of a conspiracy theory type person. But I’ve come to believe that American medicine is not about helping people get well. It’s about managing disease, and selling drugs and, creating money through the paradigm of patient treatment. 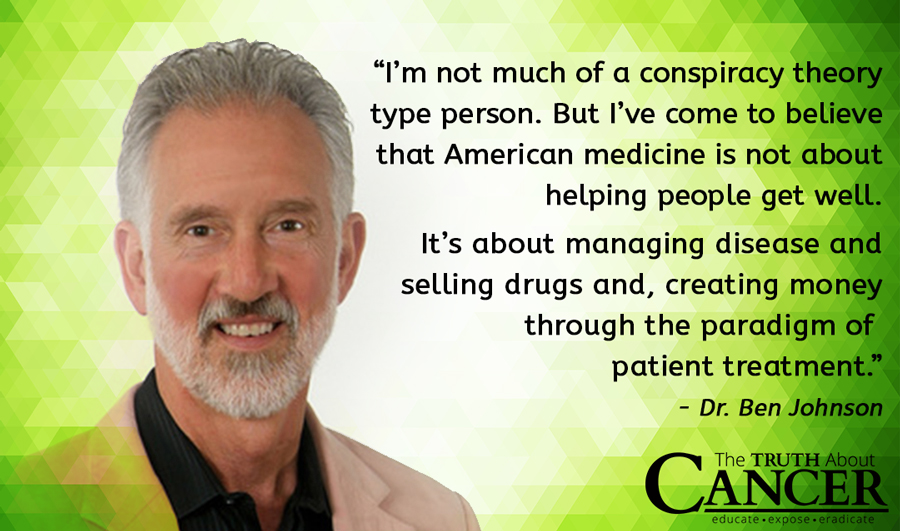 So you can’t talk about cure. You can’t look at getting people well from cancer. They just want to treat them, and then watch them die. It’s really a pretty pathetic state of affairs. So, we are not interested in standard medicine and getting people well; just managing their disease until they die.

For instance, all of the drugs that you see, if you pick up the label, all of the chemo drugs says “causes cancer.” Think about it.

Dr. Ben Johnson: We’re using a drug to treat cancer that causes cancer, a known carcinogen. How crazy is that! But that’s what we do every day in every institution across America. We use radiation. What do x-rays cause? Hello… cancer. And we are using that supposedly to treat it. So you know Stage 4 cancer in America, survival rate is about two percent. You know, that is horrific.

It can’t get any worse than two percent. So two percent success rate for Stage 4 cancers is beyond comprehension. Patients would live much longer and healthier if they did nothing. If they didn’t take the drugs. Because the drugs are hastening their death.

Ty Bollinger: I think you’re already started. I think you’re already going, which I’m enjoying because it’s good information. I’ve read studies, people saying the same thing. Doctors and scientists saying that you would live longer by doing nothing, than by doing the treatment. And, I can’t remember the medical doctor that I was just talking to recently said, that in all his years of treating cancer patients, that he’s never actually seen one that died from the cancer. That they always die from the treatment.

←
Previous
9 Strategies to Overcome a “Healing Crisis” During Detox & Treatments
→
Next
Radiation Detox: How to Rebuild Your Health after Radiation Therapy