You are here: Home / Cancer Prevention / Preventing Cancer is Like Growing a Garden (video)

Video Transcript: Preventing Cancer is Like Growing a Garden

Ty Bollinger: I’ve heard you say that health is like growing a garden. Why do you compare those two?

Dr. Patrick Quillin: Not everybody in America has access to a garden, but I hope you at least have some appreciation that—I don’t care if you live in Central Park or near Central Park in New York City.

I’ve been to New York a dozen times and it’s a beautiful, vibrant city. But go to the nearest botanical gardens and have a look at nature and have an appreciation for it because when you find a patch of land and you say, “I want to grow a garden here,” the first thing you’re going to do is take out the weeds and sticks and stones and detoxify that patch of land.

Then you’re going to go in and till it up and make sure that it has the right levels of nutrients. You’re going to nourish the soil with, of course, the common agriculture is NPK, nitrogen phosphorous, potassium. But in real plant botany, plants need more like 15 different nutrients and actually there’s 112 in the periodic table of elements.

You find a body that’s not well, all kinds of symptoms. We mentioned some of the common killers in America. And from those symptoms the first thing we would do is say, we’re going to take you just like that piece of land. Let’s detoxify you first. Let’s take out the heavy metals, the volatile organic chemicals.

Studies have been done looking at Americans, where these are legitimate labs, FDA approved labs, that have looked at urinary output from a volatile organic chemical, BPA, bisphenol A, is one that’s commonly found in almost all of us. Flame retardants in almost all of us.

You think, well, how did it get there? You know, the fact is that many of us have been exposed to frightening levels of chemicals that in many cases are hormone disruptors. That is, they affect the ability of the body to make male or female hormones, insulin, the many hormones are now dysregulated.

So those chemicals, the heavy metals, the toxic burden in the gut, many of those are causing what’s called autotoxemia. Auto as in self, toxins in the gut, back to that hundred trillion cells. Those hundred trillion microorganisms are making—if you’re doing things right they’ll make vitamin K2 which is an anticancer substance. If you’re doing things right they’ll make a little bit of gas, as in hydrogen, which actually will be absorbed into the bloodstream and is a powerful antioxidant. 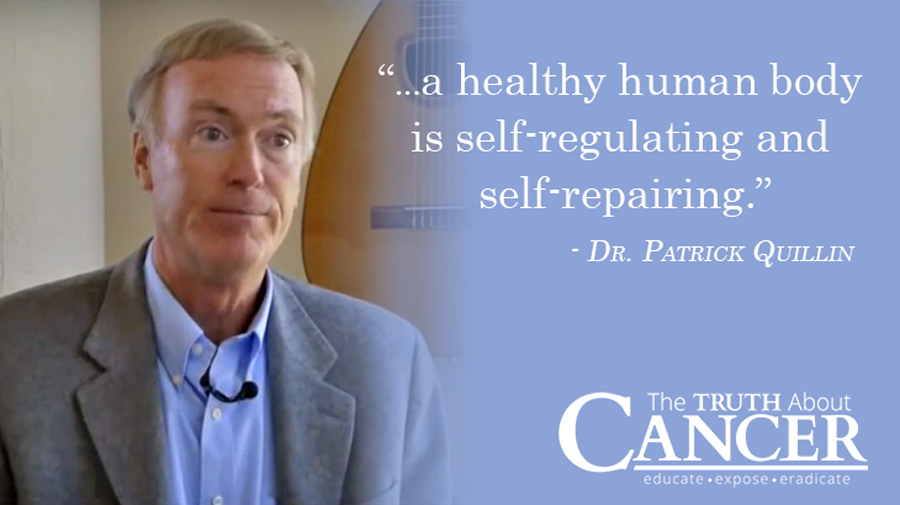 They’ll make a little bit of butyrate, which is such a powerful anti-cancer substance that its being researched at the National Cancer Institute. If you’re doing things right, if you eat right, if you don’t drink too much alcohol, drugs, antibiotics, then you’re going to have a healthy level of bacteria in the gut and it will make you healthy. If you don’t do things right those organisms start generating their own toxins which are then absorbed into the bloodstream.

And if things really get ugly then you might—your intestinal lumen will become dysfunctional, hyperpermeable and now what you have is what’s supposed to be a screen door that keeps the bugs out. Now we’ve got tears and rips in it. Now we have microorganisms moving into the bloodstream. Its called bacterial translocation. And now you have yeast, candida albicans, bacteria, yeast, virus, other organisms that can move into the bloodstream and generate autoimmune diseases, even cancer.

There’s a whole chapter in my book, Beating Cancer with Nutrition, that talks about… is cancer in some cases actually an infection? And that’s a whole fascinating subject.

Back to the business of what does a garden have to do with our body? Detoxify. The next thing you’re going to do is you’re going to nourish the soil in us too. Take that patient and make sure they’re optimally nourished so that we can go in and embrace that sound bite of “a healthy human body is self-regulating and self-repairing.” We want to get the soil doing that and we want to get our body doing it if we’re optimally nourished.

Then we’re going to do the water and check the pH. PH is an important issue in the human body as in the soil. If It’s not just right you’re not going to thrive.

Pray over it: stress reduction, an important part of healthcare.

I’ve worked with enough patients to know that what you’re eating may not be as important as what’s eating you… forgiveness, love, tolerance, a mission in life, people who love you, useful things to do, a good night’s sleep, all of that down regulates the stress hormones of the 400 different neural peptides that our brain and body make. We want them moving in the right direction.

Deepak Chopra says it best, “every cell in your body is eavesdropping into your thoughts.” So if we do it right we talk to that garden patch, we do the same thing in our body, then our body goes back into self-regulating, self-repairing, and hopefully it goes into remission from whatever it is that you had that you went to the doctor for.

←
Previous
The Role of MTHFR Gene Mutation in Cancer Development
→
Next
Gut Flora and Cancer – The Link Exposed!